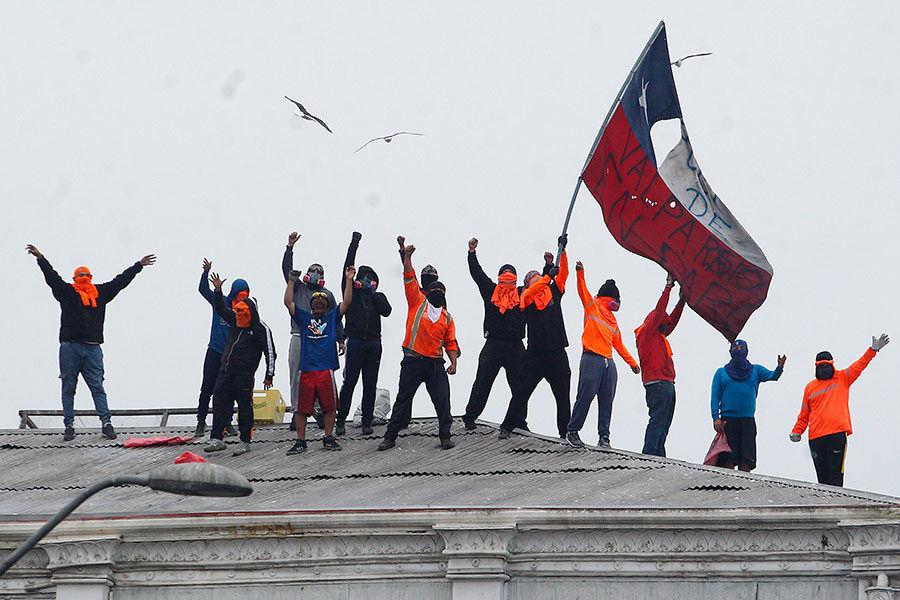 Dockworkers on strike in Valparaiso, Chile, in January of this year. Picture: El Desconcierto.

In an clear expression of international solidarity with the people of Chile, the International Dockworkers Council (IDC) has threatened to launch a boycott of all shipping cargo sailing from Chile. The IDC statement released on October 23 warns the President of Chile, Sebastián Piñera, that: “We are on alert and ready to block cargo from Chile in other ports around the world.”

The International Dockworkers Council statement signed by IDC General Coordinator Jordi Aragunde and IDC Latin America and Carribbean Zone Coordinator César Luna Valdovinas expresses “its absolute solidarity with the Chilean people and their just demands”, repudiates the “dictatorial measures” imposed by President Sebastián Piñera, and goes on to express its horror at the military and police intervention that has already left at least 15 people dead and hundreds more wounded and detained.

The IDC statement urges the Chilean President to immediately end the curfew and withdraw the armed forces from the streets, which the statement says are the “initial measures [needed] to begin a constructive dialogue.” It then goes on to warn President Piñera that he should “not force [the IDC] to take actions that could further damage the economy” and concludes with the sentence: “We are on alert and ready to block cargo from Chile in other ports around the world.” [The full IDC Statement in English and Spanish]

This threat of a global boycott of Chilean cargo marks a continuation by dockers and longshore workers of a decades-long tradition of working-class internationalism and international solidarity action.

More immediately, this potential international boycott is of direct assistance to the main dockers’ union in Chile, the Dockworkers’ Union of Chile (UPC—Unión Portuaria De Chile), which is an IDC affiliate. The UPC launched its own indefinite port strike on October 21 and continues to paralyze twenty ports across the country.

The International Dockworkers Council (IDC) was founded in 2000 and arose from an unofficial international network that formed during the 28-month long Liverpool dockers’ dispute (1995-98). This dispute was lost in part because the dockers’ national union, the Transport and General Workers Union (now part of Unite the Union), both refused to support their fight and well as blocking the International Transport Workers’ Federation (ITF) from doing so. The IDC, which describes itself as “a united, independent, democratic, and assembly-based working class organization,” now brings together over 120,000 dockworkers and 93 affiliated unions from around the world.

The much larger International Transport Workers’ Federation (ITF), with over 19 million transport workers from all sectors of the transport industry, also includes a small percentage of dockworkers. The ITF has also released its own statement in solidarity with the people of Chile, which while making many correct demands, does not call for or threaten any form of industrial solidarity action to achieve them.