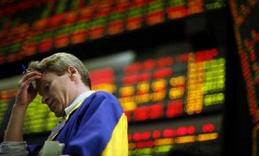 Countrywide, the main mortgage bank in the US, which has been
acquired by the Bank of America (the second largest US commercial
bank), could go bankrupt. The Bank of America would be trying to
get out of this bad deal before completely finalizing the merger of
both banks. To get some idea of what we are talking about,
Countrywide represented 20% of the mortgages of the real estate
market in the US during recent years. If the bankruptcy takes place,
it would be the biggest banking failure in US history. A preview
(maybe the trigger) of another point of the financial crisis. The
thing is that with 47% of the assets of the big banks connected to
the real estate market (residential, commercial, etc.) and with 67%
of the assets of smaller banks connected to real estate, hundreds of
small community banks, dozens of regional banks and some national
banks could go bankrupt in a probable scenario where housing prices
continue to fall 20% (some foresee even 30%) until the moment when
they hit bottom in 2009-2010.

With this prospect, would anyone in his right mind dare to say that
the worst of the financial and economic crisis is over? The current
satisfaction of the markets could be the calm before the storm. In
recent days, with the heating up of increasing inflationary
indicators, the price of oil at $130 a barrel and the US economy
rapidly contracting, the markets have already begun to lower the
excessive expectations provoked by the Federal Reserve’s rescue of
Bear Stearns. The financial crisis, which began a year ago, will
continue to make people talk.