Earlier this month, eight former workers of the Goodyear tire factory in Amiens-Nord, France were sentenced to up to two years in prison for their involvement in a historic struggle against the plant’s closure. 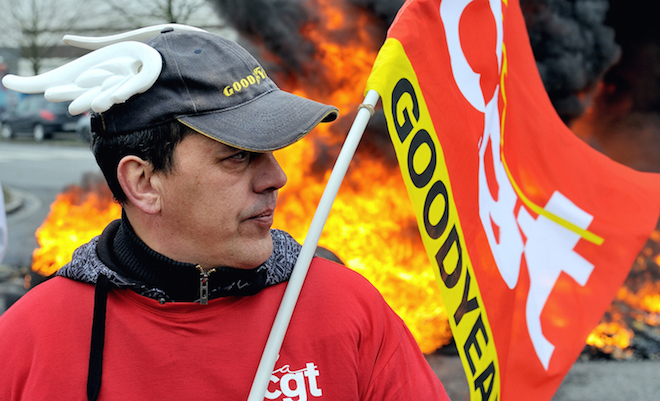 The Goodyear workers fought a five-year battle over working conditions, refusing to accept layoffs and brutal shift changes. In February 2013, the company announced the plant’s closure. In an effort to keep their jobs, the workers launched protests at the company headquarters and the factory in Amiens, with the support of thousands of workers throughout the country. They detained two company executives for 30 hours in January 2014 as they demanded to return to the negotiating table. The plant’s eventual closure resulted in the loss of 1,173 jobs.

The workers have launched an international solidarity campaign for the acquittal of the eight labor activists who now face prison time. We at Left Voice endorse this campaign and urge all our readers to sign the petition .

Below is the English text of the petition in support of the persecuted workers:

For the first time in over fifty years, the French government is attempting to bring prison sentences against labor activists for their participation, alongside other workers, in actions to stop the closure of a factory.

As President Hollande, Prime Minister Valls, and Minister of Economy Macron move to eliminate over 1,000 articles from the French Labor Code in the upcoming months, they have decided to unleash an unprecedented repression against labor activists who fight at their workplaces.

The government seeks to make an example of 8 Goodyear workers by sentencing them to prison.

Thus, the government clearly demonstrates its determination to place prosecutors and police in the service of big corporations as well as its decision to shut down resistance to the destruction of jobs and industry.

Of course, left militants and activists, and those of the trade union center CGT in particular, are the main targets of this attack.

Therefore, we call on all workers, militants, union locals, confederations, and branches, or simply all workers in solidarity, to join us in order to put forth a strong fight.
We can be millions and force Hollande, Valls and Macron into retreat, by first demanding the immediate pardon/acquittal/release of the 8 Goodyear workers, and organizing a great solidarity demonstration, to take place on the day that the appeal results will be announced.

We are all Goodyear workers!