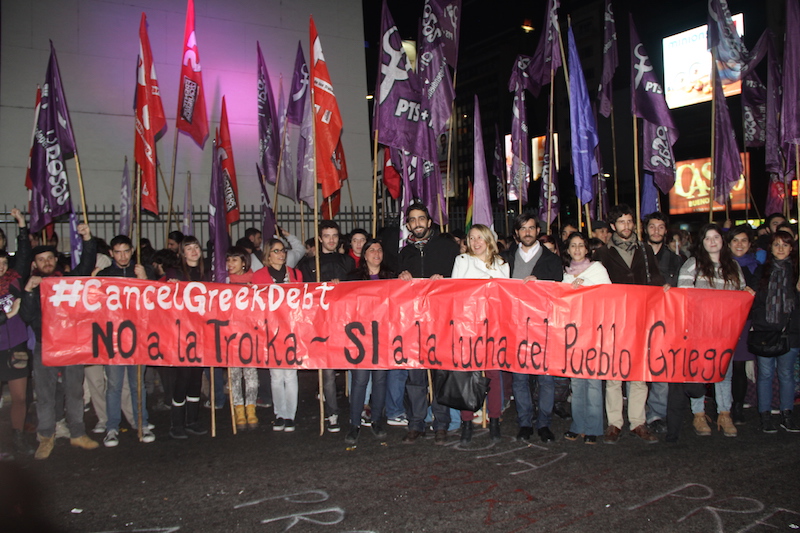 We, national and provincial deputies, from the Partido de Trabajadores Socialistas (PTS), part of the FIT, Frente de Izquierda y de los Trabajadores (Left and Workers’ Front) from Argentina, demand the immediate release and dropping of all the charges against the protesters.

We express our solidarity with the thousands of demonstrators who gathered in Syntagma Square in Athens to oppose the austerity measures imposed on the people of Greece. We stand by those who joined the strike called by the civil servants federation (ADEDY) when the majority of Syriza deputies and the right-wing pro-austerity parties like New Democracy and To Potami, where inside the Parliament approving the agreement.

We condemn the brutal repression by riot police against young activists and workers, and we also demand the dropping of all the charges against the 50 demonstrators. Among them, there are two militants from OKDE-Spartakos, members of the Anti-capitalist Left Coalition ANTARSYA, one of the organizers of yesterday’s demonstration. One of them is an educator and trade union activist, and the other one is the Secretary of the Bookstores Workers Union in Athens.

Nicolás del Caño, National Deputy (Mendoza province) for the FIT, PTS leader, and presidential candidate in the next primary election of the Left and the Workers’ Front.

Myriam Bregman, National Deputy (Buenos Aires province) for the FIT. A lawyer from CEPRODH (Human Rights organization), and vice presidential candidate in the next primary election of the Left and the Workers’ Front.

Christian Castillo, former provincial Deputy (Buenos Aires) FIT, PTS leader, candidate for governor in the next primary election of the Left and the Workers’ Front.

Javier Hermosilla, member of the comision interna (shop floor commission) at Mondelez (ExKraft Foods), (PTS), candidate for governor in the next primary election of the Left and the Workers’ Front.

María Victoria Moyano Artigas, daughter of desaparecidos during the latest dictatorship and a member of CEPRODH (Human Rights organization), running for national deputy (Buenos Aires City) candidate in the next primary election of the Left and the Workers’ Front.