International Women’s Day is About Class Struggle. Down with Liberal Feminism

Kyrsten Sinema’s recent actions highlight why liberal feminism belongs in the dustbin of history. This International Women’s Day, fight for a feminist movement that is working class, socialist and internatinalist. 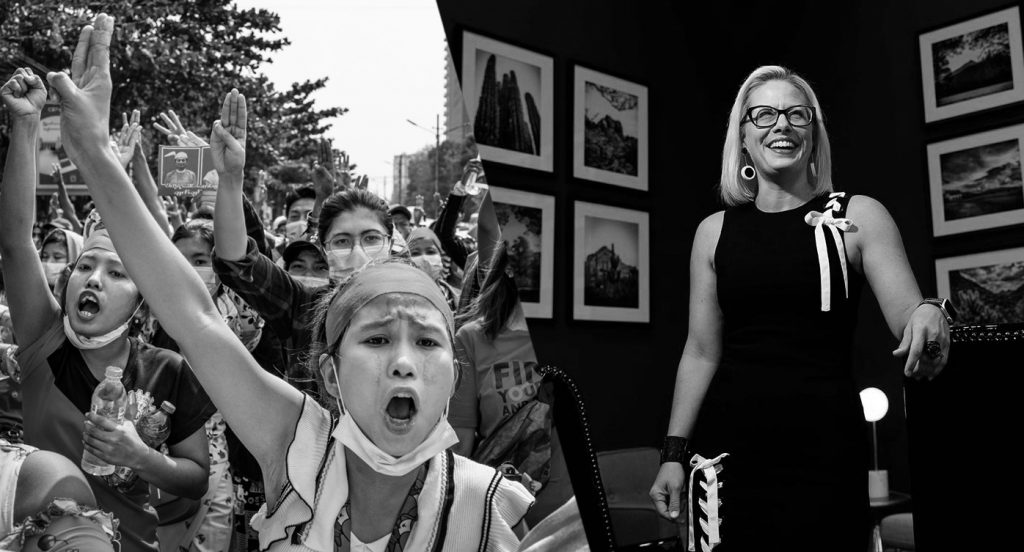 March 8 is celebrated around the world as International Women’s Day. Throughout the day, politicians, celebrities, and corporations will put out statements about the importance of women, and their commitment to #feminism. But liberal feminism is firmly on the side of capital and corporations.

Perhaps there is no better example of liberal feminism than Kyrsten Sinema, the freshman senator from Arizona. Today she tweeted her “feminist” International Women’s Day statement, trying to position herself as being on the side of women.

Happy #InternationalWomensDay, AZ! Today and every day, I’m grateful for the extraordinary women who paved the way for me and so many others in law and in life.

Sinema, celebrated as the first ever bisexual elected to the Senate, was initially a social media darling for her fashionable outfits and #girlboss brand of feminism. However, last week, she joined seven other Democratic Senators in voting against the $15 minimum wage.

The way she did it was almost a satire of how the emptiness of liberal feminism. After literally eating cake on the Senate floor, Sinema walked to the front of the chambers and dramatically made a thumbs down to indicate her opposition, and then walked out. The video went viral with many being legitimately outraged by how cavalier Sinema was about sentencing millions of people to lives of poverty — especially the Black and Latina women who are most likely to have a job that pays the poverty wage of $7.25 an hour.

Black women, we need to refrain from saving democrats because they have made it more than clear (again) they have no interest in saving us. pic.twitter.com/YkMfJBalNZ

This is liberal feminism in a nutshell: breaking the glass ceiling, only to leave the majority of working-class women to clean up the glass.

Feminism for the 99%: A Manifesto provides a great explanation of liberal feminism. The authors describe the way that liberal feminists see feminism as a “handmaiden of capitalism”:

They want a world where the task of managing exploitation in the workplace and oppression in the social whole is equally shared by ruling class men and women. This is a remarkable vision of “equal opportunity domination”: one that asks ordinary people in the name of feminism to be grateful that it is a woman, not a man who busts their union, orders drones to kill their parents or locks their child in a cage at the border.

As Tatiana Cozzarelli explained, “Liberal feminism — what one might call #GirlBoss feminism — is an integral part of progressive neoliberalism, lending a female face to a system of hyper-exploitation and oppression, with working-class women among its primary victims. Liberal feminism imagines a world in which women “break the glass ceiling” and share in positions of power with men, while the vast majority of people struggle under the yoke of capitalist exploitation and oppression.”

Liberal feminism is trash, and belongs in the dustbin of history. Representation in the highest halls of power means nothing if the entire racist, sexist, and patriarchal capitalist system remains in place.

What is International Women’s Day?

International Women’s Day was first proposed by women delegates to the National Convention of the Socialist Party of the United States, held in 1908. The following year, in 1910, the Second International Socialist Women’s Conference made the date international. At that conference, German delegates Clara Zetkin and Kate Duncker put forth the following motion:

In agreement with the class-conscious political and trade union organizations of the proletariat of their respective countries, socialist women of all nationalities have to organize a special women’s day, which must, above all, promote women’s suffrage. This demand must be discussed in connection with the entire woman’s question, according to the socialist conception. This women’s day must have an international character and is to be prepared carefully.

On International Women’s Day in 1917, women textile workers in Russia rose up. The women in Petrograd factories left their workplaces, going to neighboring factories to call on the men to also leave their jobs and join the strike. Women were the spark for the February Revolution, overthrowing the czar and creating the conditions for the October revolution that would bring the Bolsheviks to power.

Women on the Front Lines of Struggle

Working-class women are always on the front lines of struggle for justice and for the liberation of all of humanity. Just think of Sylvia Rivera and Marsha P. Johnson, at the forefront of the Stonewall uprising. Think of Harriet Tubman, who helped lead enslaved people to freedom. Ida B. Wells leading the struggle against lynching, and Assasta Shakur in the Black power movement. And think of all the women who played a role in movements to combat the racist, patriarchal capitalist system, whose names we will never know. Think of the women on the front lines of the Black Lives Matter uprisings this summer, organizing marches, leading chants, and tirelessly leading the movement.

And think of the women who are currently on the front lines of the most important unionization struggle in recent history — the fight to unionize Amazon. Black women like Jennifer Bates know that this union will be a huge blow to Amazon and dramatically impact further unionization efforts. She explained, “I think this will be like a fire starter for a lot of companies. Some people have said, ‘You all at Amazon have given us courage that now we can speak up, and somebody will listen.’ Once the union is recognized, I think we’ll really feel the impact.” The labor struggle at Amazon is led in part by Black women.

Capitalism is the Problem, Socialist Feminism is the Solution

The past year has also highlighted how indispensable working class women are, as women are disproportionately represented in the essential labor during the pandemic. What the capitalist state refuses to do, working-class women pick up the slack. That’s the nature of capitalism.

Healthcare workers like Left Voice member Tre Kwon even ended her maternity leave early to go back to her job as a nurse to fight the pandemic. There are women like her all over the country — healthcare workers, essential workers, supermarket workers, among many others. The pandemic also made visible the essential work of social reproduction, which is disproportionately unpaid and invisibilized. Millions of women had to balance working and caring for their children at home as schools were closed. As a result, there has been a mass exodus of women from the workforce. The capitalist state is responsible.

Capitalism relies on women’s unpaid reproductive labor in order to continue running — it relies on women to raise the children, make sure they get to (online) school, cook, clean, and call it love, or call it motherhood and call it normal. It keeps the capitalists off the hook for paying for childcare or taking any responsibility for social reproduction. And capitalism relies on women’s hyper-exploited paid labor, like Jennifer Bates at Amazon, to create mass profits for people like Jeff Bezos. It also relies on brutal imperialism, like Joe Biden’s recent bombs in Syria, as well as on the sanctions that are currently being instituted against Venezuela, Cuba and Iran.

Capitalism is responsible for the deaths in the pandemic, the financial crisis, the difficulties of childcare, and the myriad other crises facing the working class today. Liberal feminism upholds this system that is killing working class women the world over. As such, we say: death to liberal feminism.

Our feminism is working class, internationalist and socialist. It is rooted in the struggles of the most oppressed and exploited sectors of society. It is committed to overthrowing this system that is built on our exploitation and our unpaid labor. It is committed to a society in which reproductive labor is socialized and prioritized by all of society, a society where all of production and reproduction is decided on democratically, not for profits, but for the good of society.

For a working-class, socialist feminism that seeks liberation for all.