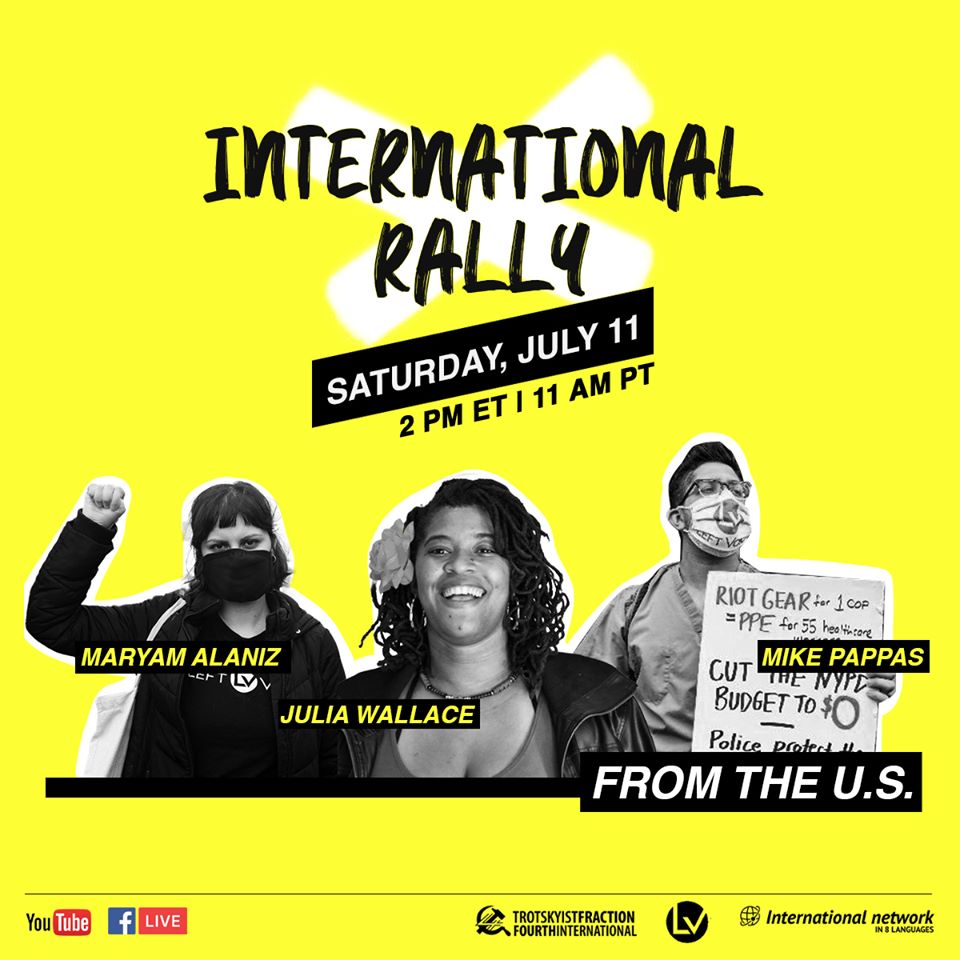 After the successful virtual rally on May Day in the midst of the pandemic, the Trotskyist Fraction-Fourth International organized another international virtual event on July 11, this time focused on the Black Lives matter movement against police brutality and racism. The rally was simultaneously broadcast in seven languages and streamed live on Facebook and YouTube.

The event featured six speakers from the United States, France, and Brazil — three countries at the center of the global movement against racism and state violence. Comrades from Chile, Argentina, Bolivia, Germany, and the United Kingdom also sent greetings and spoke about the respective struggles in their countries.

About 6,000 individual users from all around the world connected to watch the rally live, and at the time of this writing, the event has already reached more than 85,000 hits on social media. The event was translated into seven languages: English, French, Portuguese, Italian, Spanish, German, and sign language.

Following the murder of George Floyd by the Minneapolis police at the end of May, the United States erupted in a surge of anti-racist and anti-police uprisings, lead by a new generation of Black youth. Since then, similar movements have been sparked around the world. In this context, the central focus of the rally was the denouncement of the relationship between racism, police violence, and capitalism from a socialist and revolutionary perspective. The speakers, drawing on their own stories and experiences, spoke of the respective fights in their countries for workers’ rights and against racism and all forms of oppression.

Representatives spoke on a variety of issues including Black liberation, the persecution and stigmatization of migrant youth, the women’s and LGBTQ movements, the indigenous rights struggle, as well as healthcare workers’ fight against the Covid-19 pandemic.

The speeches were charged with hatred against this racist capitalist system, highlighting how capitalism necessitates inequality and subjects the vast majority to exploitation, hunger, and misery. They spoke on the importance of unity between workers and all oppressed sectors in their shared struggle against the capitalists and their governments around the world, especially in the context of the triple social, economic, and health crisis of which the working class is bearing the brunt.

The event featured a variety of speakers including Anasse Kazib, a child of Moroccan immigrants and current railway worker in France, Yunus Özgür, a young migrant from Turkey now living in Germany, leaders of the Black community in different countries like Leticia Parks and Marcelo Pablito from Brazil and Julia Wallace from the U.S., Maryam Alaniz, an American student and child of Iranian immigrants, and Mike Pappas, a doctor who has been on the frontlines of the Covid-19 crisis in the United States. Comrades from Chile, Bolivia, and the U.K. also gave greetings. Nicolás del Caño and Myriam Bregman, revolutionary militants and members of Argentina’s parliament, hosted the event.

The virtual Black Lives Matter rally highlighted the Trotskyist Fraction-Fourth International’s participation in these current struggles and movements, especially focusing on the need to build revolutionary parties and a strong revolutionary international to end this system of exploitation and oppression. The fight against racism and police violence is international!