Interview with a 30 Year UTLA Militant Teacher and Socialist

On the first day of the LA teachers strike, Left Voice spoke with Jeff Pott, a retired 30-year UTLA activist, 1989 striker, and socialist. The interview was conducted on the picket line at Marshall High School where Jeff worked for many years. 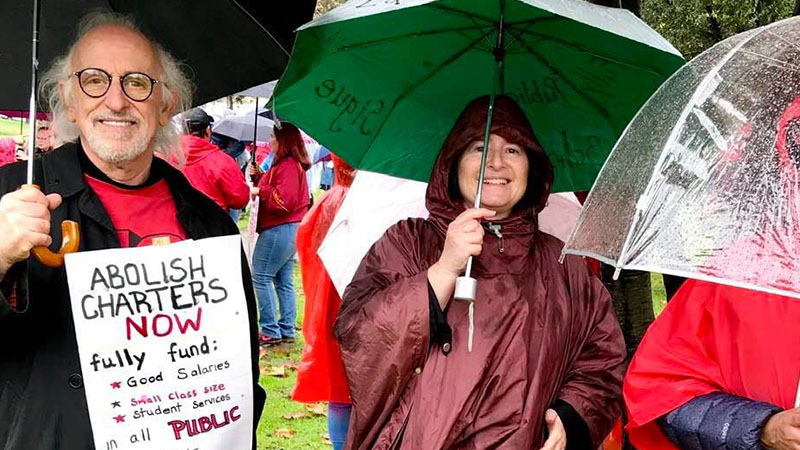 What is your perspective on this strike?

What about charter schools?

In my opinion, charters and privatization are the most significant disgrace (?) in public education today. And they are not really a part of this strike. Although the union has talked about privatization — we were chanting on the picket line against privatization — there is no demand to eliminate it. The only demand — almost silly — was for 30 days advance notice before charters can co-locate onto a campus, before the chater can take over a campus and take public funds away from public schools.

You were part of the 1989 UTLA strike. How was the ‘89 strike different or similar to today’s strike?

The ‘89 strike was more directly focused on teachers’ contractual demands, on more rights, and on pay… we won a 24% pay raise. This strike, pay is not a focus at all. The union is only asking for a 6.5% raise, and the school district has offered 6%, so pay is not a significant issue in this strike. The ‘89 strike, I believe, was also more organized. And it was a successful strike.

What are some of the things you did in the ‘89 strike to be well organized?

In the 89 strike teachers engaged in morale building, solidarity building activities for a solid year before the strike. We boycotted faculty meetings for months. We did work to rule, meaning we didn’t do anything outside our job description — teachers are normally doing all sorts of things outside our job description. Ultimately, we ended up agreeing to not sign in more than 5 minutes early or sign out 5 minutes after the school day ends, which is very unusual. Often teachers show up an hour, two hours early, and leave an hour, two hours late, because we’re grading papers, planning lessons, talking with students, doing all the things that are part of a teacher’s job. And also we boycotted submitting grades — and many teachers were disciplined for that — but it really caused a disruption to the system.

None of these things have been done in this strike. Teachers didn’t start boycotting faculty meetings until December, for a strike scheduled for January. So I don’t think this strike has been as well organized.

You identify as a socialist, as a radical?

I identify as a socialist.

What kind of leadership would you like to see built in the American labor movement?

The first thing I’d like to see is the union leadership breaking from the Democratic Party. The Democratic Party is a party of capitalism. It’s a party of the bosses, not the workers. The unions attached to the democratic party have really limited what they can do, with the leadership of the unions being completely sold out to the Democrats. This usually prevents unions from engaging in any kind of tough activity. Rather than engaging in class struggle to get what workers want, they [union leadership] hope the Democrats will throw some peanuts to them through legislative action — but usually nothing happens.

In this UTLA strike, is it fair to say local government is run by the Democrats?

Yes, the local government of Los Angeles is Democratic. I believe every member of the Los Angeles board of education is a Democrat. And in the state legislature, both houses of the legislature not only are Democratic, they have super majorities of Democrats. Republicans are virtually non-existent. And, the governor’s a Democrat. And yet, they are not doing anything to help teachers are other workers, they are not trying to limit charter privatization, most of them are backers of charter privatization.

You support unions breaking from the Democratic and Republican parties — what should they support instead?

I believe that the United States needs to have a radical labor party, that’s based on the unions, and has revolutionary politics.

How do you think this strike can be won?

I believe this is going to be a difficult strike to win, because what the union is asking for involves a huge influx of money from the state, and I seriously doubt the state’s going to provide that. I think the district, which is whining to anyone who will listen, has managed over the past five years to secrete a budget surplus of almost 2 billion dollars of unspent money. They keep saying they’re spending more money than they’re taking in… how is it possible for them to have put away 2 billion dollars — and there’s more money than that, you can bet your bottom dollar — if they’re spending more than they’re taking in? That money should be immediately used to improve the conditions in schools

How are the picket lines? Have people been crossing? Are the schools currently open?

The school is open. So far as I know, two teachers have crossed the picket line, and that’s it. The picket line is very well-attended for a rainy day in Los Angeles. There were not only UTLA members and parents and community members, there were also members of other unions, and I think that’s a really good sign.
The solidarity of working people is really important, and I’m hoping the strike will act as a spark for other unions to go on strike, because strikes have become a very rare thing in the last 30 years. The only people engaging in class struggle in the United States have been the ruling class; attacks on working people are non-stop. But working people, because their leadership has been sold out to the Democratic Party, they don’t fight back. So hopefully this strike can act as a catalyst and other people will say, “If the teachers can do it, we can do it.” And we’ll be out there supporting them, just as they are here today supporting us.

What about other unionized school workers?

All of the unions in the district have negotiated a complete sell out clause in their contract that says they cannot strike when they have a ratified contract, and most of them have ratified in recent months. The leadership of SEIU local 99 is pushing them to respect that clause. SEIU local 99, which is the union of teaching assistants, office staff, bus drivers, has said that unless 80% of the membership at a particular site agrees to support the picket line, then they should not go out. And it’s hard to get 80% to do anything — they’re frightened, they’re afraid their leadership won’t back them.