Interview with Bev Barnum: “Wall of Moms” Organizer on the Political Power of Maternal Rage

We interviewed Bev Barnum, an organizer with Portland’s Wall of Moms. She describes her political awakening in this movement coming from a “primal mom rage”, the potential of suburban moms against the “Bullies” in the Portland police force and the need to participate in the Black Lives Matter movement. 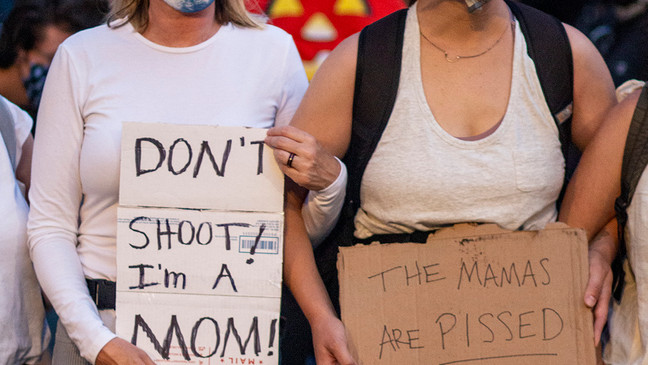 This interview has been edited and shortened for clarification

Bev Barnum, the organizer of Portland’s Wall of Moms, was interviewed on July 22nd. Portland is seeing brutal repression of protestors played out by local police force and federal agents that were sent a few days ago by President Trump. In a time of violence, uncertainty, and economic instability, suburban moms are coming into the cities with a message: We will not stand for police brutality. We will protect every protester until there are no protestors left on the streets.

Tell me a little about yourself. What has your day to day life been since COVID? How old are your children? Were you working?

My name is Bev Barnum. I am a suburban wife and mother of two. I have a 12 year old and a 14 year old. Actually she turns 13 today. It’s her 13th birthday! We’re in full on birthday mode for the 13 year old. Our son attends a private autism school. Since he’s in private school it was very easy to pivot to virtual learning because they are not restrained by any bureaucracy. They can just do whatever is right for the kids, so they transferred really well to a new type of learning. They immediately went on Zoom and within two weeks he managed his own schedule. He got PE via Zoom, art via Zoom, music via Zoom, history, everything. It was absolutely fantastic. Our daughter on the other hand attends public school and it was a different experience for her. Her school had a hard time rolling out the program, because Zoom wasn’t allowed due to privacy  constraints. Google wasn’t allowed as well. It was very confusing. She struggled. As for me, I work as a digital marketer but I don’t get paid. I help a lot of friends start businesses. So I was doing a lot of that. But now as of today I’m doing a lot of this. A lot of interviewing and a lot of protesting.

Were you politically active before you began organizing the Wall of Moms?

No. No, I’m sorry to say. I made so many excuses. In fact, I look back now and think– how could I have been so….. not blind, but uncaring. Unwilling to motivate myself to use my voice in a meaningful way. I have a lot of regrets. That’s the truth.

How do you feel about the current uprisings around the world against police brutality and for Black lives? What role do moms have in this struggle? What drove you to organize this?

You know, there’s a viral video of two police officers grabbing a protester and putting him in an unmarked minivan. Watching that as a mom….It’s the bully syndrome. A mom recognizes a bully when she sees him on the playground. After figuring out if this was even real, it was evident that the federal officers and the Portland police officers are, in fact, the bullies. They are the rioters. So I had to do something. I asked the Portland working moms group to stand with me and admitted I didn’t know what I was doing. I do want to note after I made that call to action, a mom asked me if I had reached out to the Black community organizers that were already on the ground for the last 50 days. I hadn’t. So I went on instagram and contacted Don’t Shoot, and a woman in leadership answered. She let me know that she was so glad that we Suburban moms were behind her and the movement, protecting human rights. She invited us to a protest that Saturday. That protest was for Shai’India. She was a young woman that was shot in the back of the head by her domestic partner. It’s one of these gruesome tales where there are eyewitness reports and video evidence. Yet, the Portland Police department claims that they are too busy to investigate her murder. Her killer gets to walk around Portland. Listening to her family tell her story, if there was ever a primal mom rage, I felt it. I realized that if it had been a white, 18 year old high school girl, she would have gotten the media attention she deserved. The police department would have apprehended her killer. It just woke me up. And then all the moms were ready to build that wall of moms at the Justice Center at 9 o’clock that night.

Portland was the first city to get federal police sent by the Trump administration. How has that been? How has that changed protests?

Upon researching, it became clear that the Portland Police Bureau is holding the Feds at a much higher standard than they are holding themselves to. Not too long ago, the Police Bureau shot someone with a non-lethal bullet. The man was wearing a helmet, and yet he had a skull fracture. No investigation was done… nothing. The Portland Police Bureau didn’t hold themselves accountable; the district attorney did not investigate. I feel like there’s a lot of uproar about the federal agents and I feel it too. However, I want to touch on the fact that the Portland Police Department is no better than the Feds. They are working concurrently. Honestly, I feel like the Portland Police stand not for serving and protecting Portland citizens, but serving and protecting those privileged. Yeah, it’s worse with the Federal agents here. It’s worse because we are sold the idea that the Police Department is built from the ground up to serve our communities and that is not what we are seeing.

How did you end up organizing the Wall of Moms?  How did you get people to come out? How has it grown in the past few days?

So, moms are doers. It organized itself. All I had to do  was put out the call to action and hundreds of moms were able to make the time to do social media marketing, meet with newscasters, and find resources. Medics, helmets, goggles. Moms did this.  I want to stress that I may have put the call to action out, but it was the community of Portland moms that stepped up in the most magical way to serve their community.

The Wall of moms has two contrasting images: one is a group of women singing lullabies, dressed in yellow and holding signs declaring themselves as Moms. At the same time, most of the moms are  dressed in goggles and helmets, looking ready to protect themselves from police violence. Tell me about the image the Wall of Moms are invoking at the protest.

When we put out this call to action, I reached out to Don’t Shoot. In subsequent conversations, we were linked up to a medic team that had been serving the protestors for over fifty days by that point. I was very optimistic that we wouldn’t be hurt, but they insisted we needed to be prepared. Law enforcement isn’t showing restraint, even when young teenagers are around. So I asked the moms, if you have a bicycle helmet, swim goggles, bring any protective supplies. Tear gas will blind you for a couple minutes. It was just a protective measure. I was hoping we wouldn’t have to use them, but as we now know, we had to use them. And we will continue to use them, because we’re not going to stop until there are no more protests left to protect. We are here for them.

Can you explain a little bit more about why you chose the yellow shirts and the mom-centric chants and songs?

At the justice center, there is no leadership. No hierarchy. I want to make it clear that the wall of moms’ purpose is to act as a literal wall. We’re not leading chants or leading the marches. We follow the lead of whoever has the megaphone. As far as the colors, I wanted it to be abundantly clear to the media. I didn’t want them to weaponize us as mothers. I wanted us to be so crisp, that the world would see that we werent there to make trouble. As for the yellow, my original idea was that we would use every color. But then, moms asked if we could streamline the color. So we settled on yellow.

We’ve seen images of the police tear gassing the moms and other protesters. Can you talk a little about that? Did anyone get hurt? Has this deterred moms from coming out to protest?

We’re in a war-like zone. That’s what this is. They shoot bean bag rounds. They shoot tear gas. They shoot rubber bullets. They also shoot this incredibly loud sound that makes your ears ring in this way that hurts your jaw. I want to say that for many of the moms’ experience…. It forced us to sit with former biases about protestors and their ability to effectively communicate with law enforcement. It proved to us that there is no communicating with law enforcement. They’re not there to communicate. They are there to do bodily harm. We know that because of how they are dressed. They are literally dressed for war. They’re wearing bullet proof vests. They are wearing guns. When they look at you…. They’re looking through you. This violence did not deter moms, just the opposite in fact. On our first night we had 30 moms at the justice center. The next night, Sunday, we had 150 moms. Then, the next night we had 300 and last night we had 400 moms. Hopefully by tonight we have 500 moms.

The movement has gone viral and is quickly growing. Wall of Moms contingents are starting in many major cities and the Dads with Leaf Blowers group was seen recently. What do you want to say to moms around the country as the struggle continues and where would you like to see the parent’s role in the struggle?

I just want to thank moms. As of right now, I think we have 30 thousand moms on twitter. I think we have 8 thousand moms on instagram. 6 thousand on Facebook. Moms across the globe are asking us how they can use the wall of moms. We’re drafting something so that moms across the globe can use this as a template. How to be a nonviolent protestor. You would need to be a  very brave person. Someone that can stand there and take a beating just to show the world that there is a movement to protect human rights. What we’re seeing right now is the Black community coming out to protest George Floyd and Shai’India and Breonna Taylor. When a movement like this is happening, you have to be brave enough to be uncomfortable. Even to get hurt. But, you have to do it in a way that doesn’t take away from the moment. This wall of moms is about Black lives. We are standing up for democracy. It’s time. It’s time for people to stand up for Black lives.