IPCC Report: The Impacts of Global Warming Are Faster and More Severe Than Expected

The IPCC’s latest climate report sends out a strident cry of alarm: the disaster is far more serious than predicted by the models, and the Global South will be hit hardest. 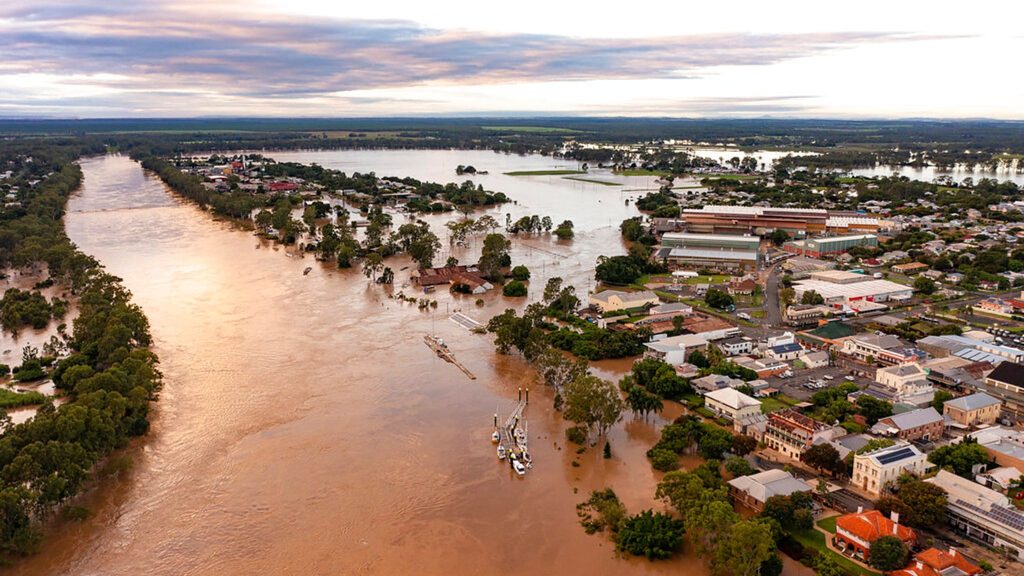 The report of the IPCC’s Working Group II on impacts and adaptation to climate change [released on Feb. 28] sends out a strident cry of alarm: the disaster is more serious than projected by the models, its effects manifest themselves more quickly, and all the risks increase. The poor, Indigenous peoples, women, children, and the elderly are increasingly at risk, especially in countries of the Global South. The policies followed to limit the damage are inadequate, run counter to sustainability, and deepen social inequalities. The authors call for an inclusive approach to transform society at all levels.

Ecosystems everywhere are altered by climate change. For some of them, the limits of adaptation are exceeded (especially in polar and equatorial regions)—they will not be able to regenerate naturally. Some extreme events exceed the averages projected for the end of the century. Species are already disappearing due to global warming.

The human consequences are worrying. Forest and peatland fires, drainage of wetlands, and deforestation result in some carbon sinks becoming carbon sources (the Amazon rainforest, in particular). The productivity of agriculture, forestry, and fisheries is declining, posing a threat to food security. The verdict of the scientists is categorical—the global food system is failing to meet the challenge of food insecurity and malnutrition in a sustainable way.

Water issues are particularly worrying. While half of the world’s population experiences severe water scarcity at least one month a year, half a billion people live in areas where average precipitation is now at the level of rainfall that previously only occurred every six years. Melting mountain glaciers cause flooding or shortages downstream, and water-borne diseases affect millions more people in Asia, Africa, and Central America.

In general, the health consequences of global warming are serious, and increase inequalities. In countries highly vulnerable to global warming (where 3.3 billion people live), mortality due to floods, droughts, and storms is 15 times higher than elsewhere on Earth. Some regions of the globe are approaching or already experiencing a level of heat stress incompatible with work. Several phenomena linked to global warming (heat, cold, dust, tropospheric ozone, fine particles, allergens) promote chronic diseases of the respiratory tract. The destruction of natural habitats and the migration of species promote zoonotic diseases.

Climate change has become a major driver of migration and displacement of human populations. Since 2008, 20 million people have been forced to move every year due to extreme weather events (especially storms and floods). These human tragedies mainly affect South and Southeast Asia, sub-Saharan Africa, and small island states. Other populations are unable to leave regions that have become inhospitable, because they lack the means or for other reasons.

Large urban concentrations in the Global South are particularly exposed to the combined impacts of climate change and the social determinants of vulnerability. This is especially the case in the informal peripheries—without water supply or sewers, often established on slopes exposed to landslides—(where women and children are in the majority). In sub-Saharan Africa, 60% of the urban population lives in the informal extensions of cities; 529 million Asians live in the same precarious conditions.

The projections are even more worrying than the findings, and can be summed up in a few words: escalation of threats.

According to the authors, any additional short-term warming increases the risks to ecosystems in all regions. The projected percentage of species at high risk of extinction at 1.5°C, 2°C, and 3°C is 9%, 10%, and 12% respectively (NB: the range of uncertainty is wide, the reality could be more serious), with a qualitative leap between +1°C and +3°C. (NOTE: 9% extinction is more than a thousand times the natural rate of species extinction.) Extreme weather events and other stressors will increase in magnitude and frequency, accelerating ecosystem degradation and loss of ecosystem services. At 4°C of warming, the frequency of fires will increase, for example, by 50 to 70%. Changes in ocean water stratification will reduce nutrient fluxes. Time lags in the development of phytoplankton may reduce fish resources.

Extra warm-up will also increase pressure on the food system and on food security. The negative impacts of global warming will become prevalent for all food systems and regional inequalities in food security will increase, researchers say. Depending on the scenarios, the global biomass of the oceans will decrease by 5.7% to 15.5% in 2080-2099 compared to 1995-2014, and the number of undernourished humans will increase by tens of millions by 2050.

The water issue will become acute in terms of sustainability. Under the median scenarios, by 2100, high mountain glaciers will disappear by 50% in Asia. At 1.6°C warming, the number of people displaced in Africa by floods will increase by 200% (and by 600% at 2.6°C). At 2°C of warming, extreme agricultural droughts will increase by 150 to 200% in the Mediterranean basin, western China and high latitudes of North America and Eurasia. At 2.5°C, 55% to 68% of commercially exploited freshwater fish species in Africa will be at risk of extinction.

Rising sea levels will become increasingly threatening: risks in coastal regions will increase particularly beyond 2050 and will continue to increase thereafter, even if warming stops. The risk will increase by 20% for a rise of 15cm, will double for a rise of 75cm and will triple for a rise of 1.4 meters (NB: such a rise is likely during this century). Africa is also very threatened here: from 108 to 116 million people affected by 2030, and up to 245 million in 2060. Developed countries are not immune: the risk will increase tenfold in Europe by 2100, and even faster and more with a constant policy.

The consequences for health are in line with and sharpened by “the degradation and destruction of health systems.” A high emissions scenario would increase the annual number of climate deaths by 9 million in 2100. In a medium scenario, this number would increase by 250,000/year in 2050. The ranks of victims of malnutrition will swell, especially in Africa, South Asia, and Central America. In all scenarios, parts of the globe that are densely populated today will become unsafe or uninhabitable.

If inegalitarian policies continue, the number of people living in extreme poverty will increase from 700 million to one billion by 2030. The authors refer to this as crossing “social tipping points.”

As in previous reports, the WGII identifies five “Major Reasons for Concern” (“Major Reasons for Concern”, RFC): unique ecosystems under threat, such as coral reefs and mountain environments (RFC1); extreme weather events (RFC2); social distribution of impacts (RFC3); some aggregate global effects, such as the number of climate deaths (RFC4); single large-scale events, such as the dislocation of ice caps (RFC5).

For each of these RFCs, the authors compare the current level of risk to the level of risk assessed in their previous report (IPCC 5th Assessment Report, 2014). The level of risk refers to the objective of the United Nations Framework Convention on Climate Change (UNFCCC) adopted in Rio (1992): “to avoid dangerous anthropogenic interference with the climate system.” The conclusion of the comparison should sound like a siren alarm: the risk has become high to very high for the five RFCs in all scenarios (even if the level of warming remains low). Staying below 1.5°C would allow the risk to remain “moderate” for RFC 3, 4, and 5, but it’s already high for RFC 2, and it’s going from high to very high for RFC1.

We know that some emission mitigation scenarios rely on a “temporary overshoot” of 1.5°C, while remaining “well below 2°C” (Paris Agreement). There would be severe risks and irreversible impacts, say the researchers. In addition, the risk would increase that large quantities of carbon stored in ecosystems would be released (as a result of fires, melting permafrost, etc.), which would accelerate climate catastrophe.

Governments claim to pursue a policy of adaptation to the inevitable part of climate change, as provided for in international agreements. The GTII report takes stock of this: (1) it is unfair and inefficient, and benefits more well-off incomes than the poorest; (2) instead of complementing the essential drastic and rapid reduction in greenhouse gas emissions, it serves as a substitute, so that global warming worsens, which reduces the possibilities of adaptation, to the detriment of the poor; (3) the spaces for maneuver are further reduced due to the deployment of measures aimed at circumventing the reduction of emissions (for example: carbon capture-sequestration, tree plantations, large hydroelectric dams) to the detriment of Indigenous peoples, poor populations, and women.

According to the authors, it is crucial to develop an inclusive, fair, and just policy, particularly with regard to Indigenous peoples, whose knowledge must be valued. The empowerment of marginalized communities is decisive for the co-production of a sustainable climate policy. Governments’ lack of social justice is singled out as the greatest obstacle, particularly in the face of the challenges of the food-energy-water nexus.

Health, education, and basic social services are vital to increasing the well-being of populations and the sustainability of development, the report reads. It is therefore a priority to increase the financial means of the Global South, where the cost of adapting to global warming will very quickly exceed the $100 billion/year that the North has promised to pay (but has not paid) to the Green Fund for the Climate. The report cites amounts of $127 to $290 billion/year in 2030-2050, which could go up to $1000 billion.

The IPCC WGII ​​report obviously does not provide a social strategy for dealing with capitalist climate catastrophe: the general tone is one of good intentions and pious wishes for the inclusion of all social actors. But social movement activists will find two things useful in their fight: a scientific confirmation of the extreme gravity of the impacts of global warming, and a rigorous demonstration of the systemic injustice of climate policies.