Is Economic Struggle Enough?—A Critique of “Base Building”

There is a new tendency on the U.S. left. The Marxist Center calls for a strategy of “base building” in order to overcome capitalism. While this has a number of progressive elements, such as independence from the Democratic Party, this guest post by Steve Leigh of the Revolutionary Socialists of Seattle argues why “base building” marks a step back from Marxist strategy. 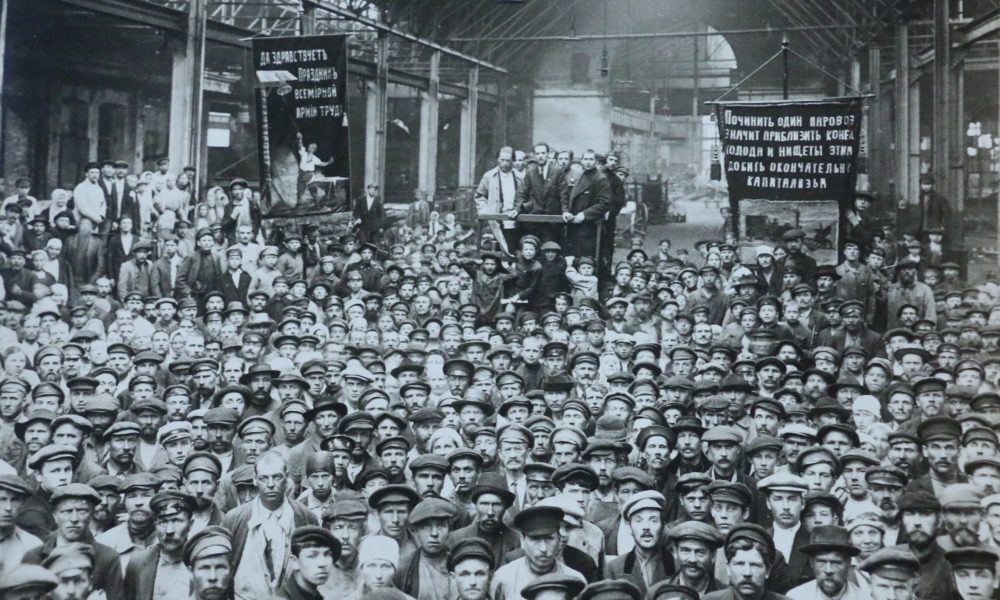 The kind of "base" that we need: Workers at the Putilov Plant in Petrograd in 1920

The Philadelphia Socialists have cohered a new tendency on the U.S. left, known as the Marxist Center (MC). This coalition of local groups focuses on “base building.” This essay will take a critical look at this strategy.

Base building is very broadly defined by the Marxist Center. It includes organizations of struggle such as tenants’ unions or workers’ unions, but also self-help organizations such as food banks and car repair workshops, or even urban gardening and yoga classes.

The MC’s emphasis on socialists engaging in struggles for reforms is welcome. They correctly oppose the Democratic Party and attempts to change it from within, since socialism will only come through revolution. Most revolutionary socialist groups agree with the MC on these points—and in fact are already engaged in building organizations of struggle.

The problem lies in the specifics of the MC’s approach to base building. This essay will look at three aspects: 1) Self-help; 2) Lack of broad political focus 3) Hierarchical approach

Given the depravity of capitalism, various forms of self-help arise and will continue to arise. Their effect is contradictory. They ameliorate the problems of capitalism without teaching people that the way to bring real improvements to their living standards is through class struggle (taking back the wealth workers have created). Self-help teaches people that even under capitalism, human needs can be met by collective cooperation. This can encourage collective action—but also create illusions in the reformability of capitalism.

Marxists stress the centrality of class struggle for two reasons. First, it is the most effective way to improve conditions under capitalism. Because it takes resources from the capitalists and gives them to the workers, class struggle improves conditions for the working class as a whole rather than re-distributing poverty within the class. Class struggle also sets the precedent for further re-distribution of capitalist wealth.

Most importantly, it strengthens the confidence and organization of workers, who begin to trust their own strength to resist and ultimately overthrow capitalism. Socialist revolution is the culmination of class struggle: Instead of just winning back some of the wealth that capitalists have stolen, workers take it all back and use it to meet the needs of humanity. Self-help is most effective where it is used specifically to facilitate struggle, such as building strike funds. This is equally true of Marxist education whose aim is to make class struggle more effective.

Base building is about a sustained political-organizational engagement with a specific community/demographic/sector of the working class over certain issues at the site of the struggle or discontent. Capitalism reproduces itself and its social relations of workers/employer, exploited/exploiter at most sites of social life.

But effective class struggle cannot just be about economic questions. Workers and tenants have interests outside the workplace or home: health care, the environment, war, democratic rights, etc.

Just as important as these issues are the issues of oppression. No working-class movement can be successful at defending the interests of the class as a whole if it leaves behind the most oppressed. The unity necessary to challenge and finally overthrow capitalism must be built by workers confronting all forms of oppression.

Revolutionaries try to convince unions and other working class organizations to actively oppose racism, sexism, etc. These are not issues to be put off until after the revolution, or even until after we first build up struggles around immediate economic issues.

In What Is To Be Done, Lenin wrote that a revolutionary politician must be a “tribune of the people, who is able to react to every manifestation of tyranny and oppression, no matter where it appears.” The development of working-class consciousness requires that workers respond to every instance of oppression, no matter what class it affects. This applies to socialist organizations today.

The need to educate and organize workers around oppression is a good example of the importance of the battle of ideas. Winning workers to particular political viewpoints will help to facilitate the class struggle. Not to do so is to leave important ideological roadblocks in place.

This applies to issues of internationalism as well. Marx noted that the key weakness of the English working class was its prejudice against Irish workers. His companion Friedrich Engels wrote, “A people which oppresses another cannot emancipate itself.”

All action is organized on the basis of ideas. Winning workers to Marxist ideas will help facilitate victory in their struggles. How Marxists participate in struggle is as important as that we participate. If all we do is focus on immediate economic questions, we are not promoting the historic interests of the working class.

Lenin laid out this approach clearly in What Is To Be Done?, a polemic against the “Economists.” The Economists only supported economic struggles by workers, believing these would develop into political struggles without a conscious intervention by revolutionaries.

The MC’s base building is influenced by some of the same ideas that motivated Economism. While the MC acknowledges the importance of issues of oppression and other political issues and sometimes raises these in its publications, its organizing strategy is at odds with this acknowledgement. It focuses so squarely on immediate economic issues that other political issues are downplayed. “People join unions and coops out of enlightened self-interest,” Sophia Burns writes. This is similar to the approach outlined by Julian Guerrero:

interest in discussing socialist politics divorced from struggle can quickly dissipate as the value of these politics in action is missed because the politics remains abstract.

This overemphasis of economic questions can mis-train socialists and make it harder to take up political issues later.

To be fair, Philly Socialists have been involved in at least some struggles around broader political issues. Besides winning “just cause eviction” through their work in the Philly Tenants Union, they initiated a coalition against ICE. However, even the Philly Socialists have not established a major orientation around broader political issues. Regneration magazine reflects the MC’s weakness on this, with few articles about big political questions.

This underemphasis of general political issues is a weakness. Broad numbers of youth are fighting climate change. The Women’s Marches drew out millions. In 2006, immigrants shut down large sections of industry in the U.S. In 2003, millions turned out against the Iraq War. Occupy drew thousands in over 100 U.S. cities.

Thousands and thousands of working-class people have been and are involved in these movements. Millions of people are now open to socialist ideas. Over 60,000 people have signed up as members of the DSA. The pool of those who could join revolutionary Marxist organizations in the U.S. is larger now than at any time in over 45 years.

This is strategically important. Different issues radicalize people. Workers are not just concerned about wages, nor are tenants only interested in rent. This is true of the most oppressed as well as the rest of the working class. Think of the large demonstrations around Black Lives Matter, immigrant rights, etc.

Important reforms have been won by mass movements most that did not follow the MC’s base building method—from civil rights, affirmative action, and same-sex marriage, to ending the Vietnam War. In the course of these struggles, thousands became revolutionaries.

Some supporters of the MC’s base building strategy are very dismissive of movements like this. Sophia Burns, for example, claims that “March for our Lives and the Women’s March ultimately only benefit the (Democratic) party itself.” She refers to leftists who engage with these movements as “ambulance chasers.”

Supporters of the MC’s base building tend to characterize the rest of the Left inaccurately. Most Leftist organizations are in fact involved in both propaganda and agitation. They don’t just go to rallies or support candidates. In many cases, they are involved in grass-roots organizing around issues of exploitation and oppression.

Burns and other supporters of Base Building go so far in focussing on specific campaigns that they nearly totally reject the role of revolutionary propaganda. The MC’s base building approach is too narrowly focused on economics and not enough on broad politics.

Base building can be based on a hierarchical model. The “Party” (in this case the Philly Socialists or other MC groups) sets up and leads particular “mass” movements, and it continues to dominate them politically even when the other organizations become “independent.” This is the traditional model of front groups, rather than the united front approach followed by the Bolsheviks, and the early Comintern .

With a united front approach, revolutionaries work with reformists on issues that both agree on. In the words of Leon Trotsky, they “march separately but strike together.” Revolutionaries try to win workers to their politics in the course of the struggle, by displaying in practice that Marxist strategies and tactics are effective, but also using revolutionary propaganda. In a real united front, revolutionaries never expect to have sole leadership all the time.

In non-revolutionary periods, the vast majority of workers are not revolutionary. This is true even of workers currently engaged in struggle. Therefore, a mass working-class base cannot be a revolutionary base—at least outside of a revolutionary situation. Due to the ups and downs of struggle, united fronts are temporary. Unity in action between revolutionaries and reformists cannot last over long periods, given that reformists inevitably betray struggles

Workers are radicalizing. Millions are becoming socialists. The point is to win as many socialists as possible to Marxism and to organize them. We do not yet have a revolutionary socialist vanguard party, i.e. a relevant section of the class convinced of a Marxist strategy and committed to leading millions. Our aim should be to contribute to the formation of the cadre of a future party. We can best do that by forming socialist organizations that can intervene in struggle as well as engage in propaganda.

What does this mean in terms of strategy? Instead of setting up front groups dominated by a particular political tendency, we need to intervene in actually existing struggles. These interventions can take the form of coalitions, rank-and-file caucuses in unions, women’s groups, etc.

Our goal should not be to set up and dominate front groups that are only engaged in economic struggle. Instead we should build broad fronts of struggle that include people with different political views. We struggle along side them and only win political leadership to the extent that we win people politically, not through bureaucratic dominance.

The MC’s opposition to the Democratic Party is welcome, as is its insistence on the need for revolution. Its emphasis that Marxists need to be involved in organizing and not just propaganda is also important However, its adherence to a particular form of base building—almost exclusively oriented on immediate economic questions, to the near exclusion of propaganda and engagement with broader political issues—is a weakness. The base building strategy is no replacement for a strategy of organizing the most politically conscious workers in a socialist vanguard party which, in a revolutionary situation, can lead the working-class struggle for power.