Israel’s military helps the United States more effectively oppress Black and immigrant communities. The fight for abolition and the fight against imperialism are one. 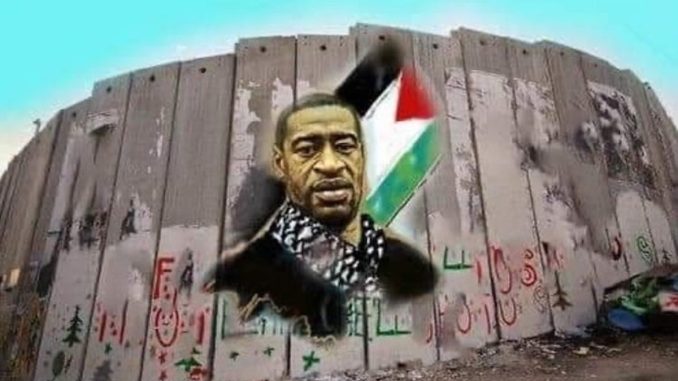 In recent weeks, there have been unprecedented movements around the world in solidarity with the people of Palestine. Though Israel has been a racist, violent occupier of Palestine since its inception in 1948, the massive public support for the Palestinian cause is new. Much of this new support comes in response to Palestinians’ use of social media to document and publicize the regular abuse that they have long been resisting.

If this sounds familiar, it’s because roughly this time last year, a similar dynamic played out in the very heart of the U.S. empire. After decades of police violence against Black communities, people around the world took to the streets in solidarity with the call that Black Lives Matter. These protests came primarily in response to the gruesome video of Minneapolis cop Derek Chauvin murdering George Floyd by kneeling on his neck for eight minutes.

The Free Palestine movement in the Middle East and the Black Lives Matter movement in the United States are not mirror images — both have their own dynamics rooted in the unique histories of the oppressed groups leading them. However, there’s no denying that they share much in common. Both struggles are closely connected by the fact that Israel’s military, the Israel Defense Forces (IDF), provides significant support to the institutions of policing that disproportionately target Black and Brown communities in the United States.

The IDF’s influence is not the original source of the racism and violence of police departments in the United States — an institution which evolved from slave patrols and union busting. The IDF, however, can test and then teach high-tech methods for occupation and repression. This includes murdering civilians, denying medical care, aggressively detaining children, attacking protests, and targeting journalists. All of these Israeli abuses are also staples of police departments in the United States.

In addition to the long history of the IDF training police departments, Israel’s military has lent its experience as a colonial occupier to ramp up militarization along the U.S.-Mexico border.

You might be interested in: Migration in the Time of Biden and AMLO: Imperialism and the Border

Since 2004, Elbit Systems, an Israeli private military technology company, has been the leading provider of surveillance equipment used in the increasingly deadly war against migrants from Latin America. Elbit Systems owes its success to years of the IDF testing its technologies on occupied Palestinians in Gaza.

The collaboration between Israeli military tech companies and border militarization in the United States has only grown. As investigative journalist Tom Engelhardt highlights in his reporting for TomDispatch, the state of Arizona has developed a particularly close relationship with Israeli tech firms that deploy their technology at the U.S. border. The same report also reveals that IDF brigadier general Roei Elkabetz spoke at a 2012 border technology conference in El Paso, Texas.

Along with providing surveillance technology, the IDF trains Immigration and Customs Enforcement (ICE) officers which have a reputation for inflicting terror on immigrant communities in the United States. In fact, Peter Edge, the Acting Deputy Director of ICE under Trump, trained in Israel as part of a seminar on counter-terrorism. The IDF has trained other federal agencies in counter-terrorism, including the FBI and the CIA.

Under capitalism, systems of oppression are global. The relationship between the IDF and U.S. police highlights this perfectly. While many workers in the United States have correctly been pointing out our government funds the Israeli occupation of Palestine, it is important to understand that this relationship works both ways: the United States provides equipment and funding to the IDF to commit crimes against Palestinians, and the IDF teaches what they’ve learned to police in the U.S. to more effectively terrorize Black and immigrant communities.

This is why the working class must always take a consistent and non-negotiable stand against imperialism. The Black Lives Matter protests last year succeeded in forcing Minneapolis to prosecute and even sentence Derek Chauvin. The protests in support of Palestine recently forced Israel to agree to a ceasefire. But these are single victories — the violence against Black communities did not end with the Chauvin sentencing, and Israel’s violent occupation of Palestine is not ending with the recent ceasefire.

Here in the United States, workers can play an important role in the Palestinians’ struggle to free themselves from the Zionist occupation. Workers in the United States can and should use the power of strikes to stop the imperialist war machine. We must demand that the United States not provide one more penny or bullet to Israel. This is not just a demand in solidarity with Palestine, but a demand in solidarity with Black communities resisting police violence, immigrants who have a right to live in peace, and all oppressed communities fighting injustice under capitalism.