Israeli police injured hundreds of Palestinian protestors and worshippers at Al-Aqsa mosque Friday night. The attack follows a week of protests against the Sheikh Jarrah evictions, the latest act of forced displacement of Palestinians under Israeli occupation. 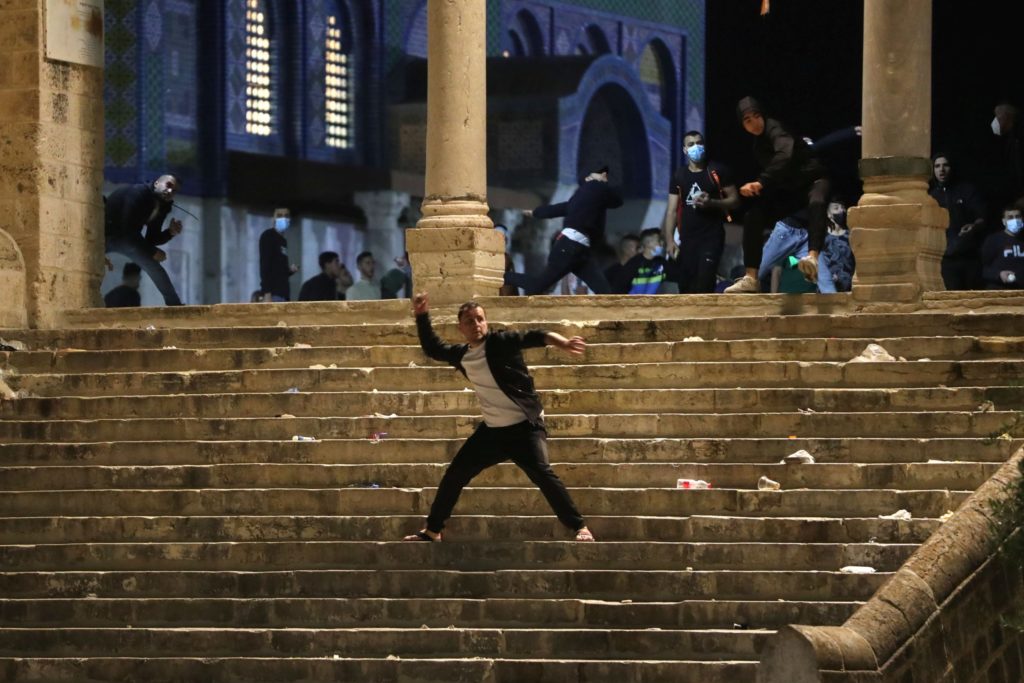 Palestinian families living in Sheikh Jarrah, a Palestinian neighborhood of East Jerusalem, are facing forced displacement and violence after Israeli courts ordered the eviction of over a dozen families last year. Four families are facing imminent eviction and more are expected to be expelled from their homes in the summer. On Monday, the Israeli Supreme Court is set to decide whether to uphold the eviction of six families from the neighborhood to make room for more Israeli settlers.

Over the past week, this latest flashpoint of settler violence has led to protests among Palestianian activists living under Israeli occupation as well as international solidarity activists, with solidarity protests planned across major U.S. cities today.

Last night, Israeli police violently repressed Palestinian protestors in an unprecidented attack on worshippers at Al-Aqsa Mosque. Thousands of people had earlier packed Islam’s third-holiest site on the final Friday of Ramadan, and many stayed on to protest against the evictions. More than 200 people were injured during the attack and several of the injured protestors were trapped inside the mosque without access to medical attention.

According to the Times of Israel, the Israeli army is deploying “reinforcements” on Saturday after its crackdown on Palestinian worshippers and demonstrators last night, as Palestinians have called for protests across the occupied Palestinian territories.

This is so painful ?
How can they attack peaceful worshipers in a Mosque ? #AlAqsa #Palestine pic.twitter.com/i8A8aCM4ZL

Activists on the ground and across the world are also reporting a media blackout after several posts, hashtags, and accounts related to the recent tensions in occupied Jerusalem were reportedly censored or deleted on Facebook, Instagram and Twitter.

The Roots of Today’s Tensions

What is happening in Sheikh Jarrah can be traced back to the 1948 Nakba, which led to the massacres and expulsion of Palestinians from their historic lands during the artificial creation of the State of Israel. Some 3,000 of the refugees who were forcibly displaced from their original homes eventually settled in Sheikh Jarrah under an agreement between Jordan and the UN refugee agency.

Since the early 1970s, Palestinians in this neighborhood have been battling settlers who have been trying to displace them from their homes through lawsuits claiming Jewish ownership dating back to the Ottoman era (1516–1832). During these decades of legal battles, Israeli courts have more often than not ruled in favor of the settlers to expel Palestinian families from Sheikh Jarrah.

In the context of the growing tensions, the Israeli government has tried to downplay the situation in Sheikh Jarrah as a private “real-estate dispute,” accusing Palestinians of being behind the escalation in violence. Yet, the struggle against the evictions has become emblematic of a wider effort to remove thousands of Palestinians from strategic areas in East Jerusalem and a symbol of the decades-long fight for Palestinian self-determination.

Meanwhile, outside of Jerusalem, at least four Palestinians were killed by Israeli forces in the occupied West Bank this week. Among them are 16-year-old Saeed Yusuf Muhammad Oudeh, and 60-year-old Fahima al-Hroub. These murders highlight the routine violence Palestinians living under Israeli occupation face.

This is one of the first crises between Israel and Palestine since the inauguration of Joe Biden earlier this year. U.S. State Department officials have called Israeli and Palestinian officials in an attempt to de-escalate the situation in Jerusalem and the West Bank.

Biden, like his predecessors, has a strategic interest in maintaining the Israeli state as a pro-imperialist enclave in whatever way possible and therefore continuing Palestianian oppression. U.S. imperialism is a bipartisan affair, as shown by Biden’s recent announcement that the United States will keep its embassy in Jerusalem.

Working-class and oppressed people, especially those living in the foremost imperialist country that funds and supports Israel, must demand the right to Palestinian self-determination and fight to end the brutal occupation of Palestinian territories, with an anti-imperialist persepective.