Israeli Soldier Shoots a Palestinian Teenager Who Is Restrained and Blindfolded

The images, documented by a photographer, show the routine violence against the Palestinian population in the occupied territories. 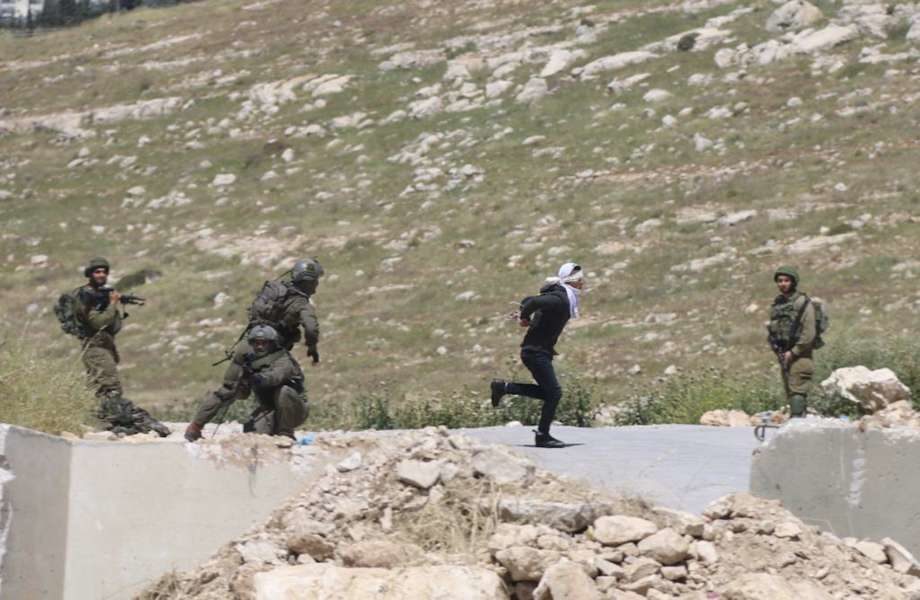 It was a scenethat is repeated daily in the Palestinian territories occupied by Israel. The difference is that this time, a Palestinian photographer documented it. Last Thursday, a 15-year-old student, Osama Hajahjeh, was wounded by a bullet from anan Israeli soldier’s gun.

Photographs document the moment when the young man was trying to run away – hands tied behind his back, eyes blindfolded with a piece of cloth – and the soldiers started chasing him down. A video captured what happened after the shot: soldiers from an elite commando unit, one of them with a sniper rifle, facing down the Palestinians that come to help the wounded teenager. The 15-year-old remained handcuffed even after being shot.

Had it not been for the camera of Mohammad Hmeid, the shot that hit Osama would have remained anonymous – yet another episode  of the Israeli violence  in the occupied Palestinian territories since 1967.

The images of the moment when the soldier shot the restrained, blindfolded young man circulated in Israeli media outlets on the first day of Passover.

A spokesperson of the Israeli Defense Forces spokesman justifed the shooting, arguing that “throwing stones put [Israeli] civilian and military lives in danger, so we responded with riot control methods and arrested a protester.” The teenager was arrested for participating in a protest in the West Bank against the ongoing occupation of Palestinian lands by Israeli colonial settlements in Tekoa, to the southeast of Bethlehem.

“The incident will be investigated,” the army assured. But this was not an isolated case. It is part of an Apartheid system that Israel imposes on the Palestinian people.

During the recent election campaign, the occupation was vigorously defended by the prime minister, Benjamin Netanyahu. For the first time, he promised the annexation of the Israeli settlements on occupied Palestinian soil. It was in fact a last-minute attempt to shore up support from the ultra-orthodox, the nationalists, and the far right, who together form a majority in the new parliament.

Netanyahu is preparing to form a government with an array of racist, fascist, ultra-orthodox, neoliberal parties, many of which are even more radical than him The “Jewish Power” party, for example, advocates violence against Arabs and calls for the expulsion of the Palestinian population. The fifth Netanyahu cabinet will be even more right wing than the previous ones.

The crimes of the State of Israel against the Palestinian people cannot be ignored, including massacres andthe daily collective punishment to which Palestinians under occupation are subjected.

As shown by the Israeli historian Ilan Pappé, the foundation of the State of Israel was a “colonial act” based on the ethnic cleansing of the Palestinian people. Pappé has argued that “Israel turned Palestine into the largest prison on earth” based on tate terrorism, which he defines as “incremental genocide.” This colonial situation is currently being reinforced by Trump andNetanyahu.