During the “polar vortex” this January, 1,600 prisoners in Brooklyn went without heat or water for days. After pressure from protesters and family members outside the prison, the Metropolitan Detention Center is beginning to address its inhumane conditions.
Share on facebook
Share on twitter
Share on email

As rapidly shifting climates have pitched much of the eastern United States into freezing temperatures, those incarcerated at the Metropolitan Detention Center in Brooklyn (MDC) spent days without electricity and heat, resulting in near-freezing temperatures indoors. They also suffered from a shortage of appropriate supplies such as blankets and warm clothes, and were unable to refill prescriptions and eat hot food. The Bureau of Prisons admitted in a statement on Saturday that the jail experienced a “partial power outage due to a fire in the switchgear room” over a week ago. The jail lost power for the first time nearly a month ago on January 5th and then permanently on January 20, forcing inmates to live in temperatures below 40 degrees– which nonprofit Legal Aid Society says was “dangerous to human life.”

MDC houses over 1,600 inmates, including many who are awaiting trial and have not been convicted of any crimes. Inmates who were on lockdown in their dark cells banged on the walls in the hope of receiving attention and many huddled together in beds to remain warm.“In the past hour, I have gotten 11 calls. People are frantic. They’re really, really scared. They don’t have extra blankets. They don’t have access to the commissary to buy an extra sweatshirt,” paralegal Rachel Bass of Federal Defenders in Brooklyn said on Thursday. 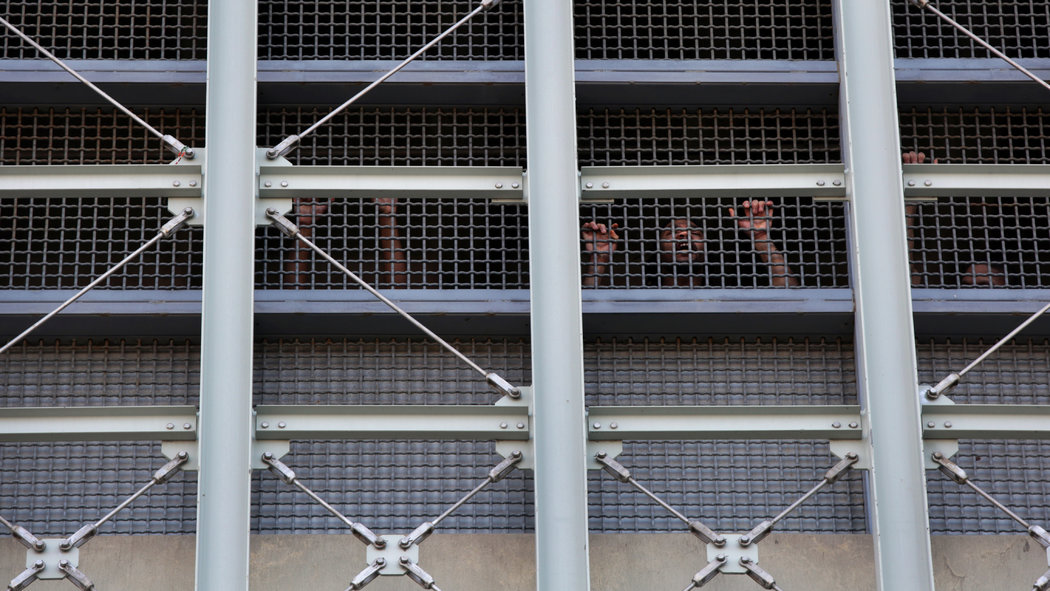 Image by the New York Times.

MDC’s warden, Herman Quay, failed to address the situation with any urgency—instead the prison denied the dire and inhumane conditions in the prison. Inmates were not allowed to have contact with family; those who had contact with lawyers have reported illness as a result of unliveable temperatures.

It was the families who were instrumental in bringing attention to the plight of the prisoners. Over the weekend, hundreds of people began to rally at the MDC, setting up an occupation and creating a push for social media attention. As a direct result of these efforts, the lights were back on by Sunday evening, although heat was not entirely restored. There are still inmates without heat.

With phone lines overwhelmed, callers were eventually connected not to the warden but instead to an operator who spread lies about what was going on in the prison. One caller from Seattle was told, “to help your concern there is heat and hot water. We can’t take calls because we are trying to get things up and running. As a matter of fact it’s very hot.” The Bureau of Prisons similarly claimed in their statement on Saturday that cells had hot water at that time, as well as lighting in the common areas and hot meals for inmates, but frantic inmates communicating with federal defenders reported poor heating, little to no hot water, no lights in their cells and no hot food.

Hundreds rallied and protested outside of the prison over the weekend. Many of the protesters included family members of the incarcerated who are concerned that their family members are suffering through the current “Polar Vortex.” As protestors chanted outside, inmates could be seen in the windows, asking for help.

LISTEN: you’re hearing the sound of inmates using flashlights to bang on their cell windows at the #MetropolitanDetentionCenter #MDC. The federal @TheJusticeDept lockup in #Brooklyn has had reduced power and heat all week. #PolarVortex #ABC7NY pic.twitter.com/2BRFEq7ltM

On Saturday, when a mother attempted to go inside, desperate to communicate with her son, she and other protestors were met with police pepper spray, showing once again that the police serve to protect, not the welfare of the people, but the interests of the ruling class and a prison system which makes billions of dollars in profit off of prisoners. Despite these clashes with the police, the resistance of the people inside and outside the prison pressured both politicians and prison authorities to get the lights back on in the prison Sunday night. Wyn Hornbuckle, the Deputy Director of Public Affairs at the U.S. Department of Justice released the following statement on Sunday night:
“The electrical power at the Bureau of Prisons (BOP) facility at MDC Brooklyn was restored at approximately 6:30 pm this evening. With the heat and hot water operational, and the restoration of electrical power, the facility can now begin to return to regular operations. In the coming days, the Department will work with the Bureau of Prisons to examine what happened and ensure the facility has the power, heat and backup systems in place to prevent the problem from recurring.”

Yet, people attending the protests outside of MDC on Monday disputed this claim, saying that heat had not been restored sectors of the building. A federal defender leaving the building admitted that the building is “structurally inadequate” and stated that the contractor in charge of fixing the electrical system left on Sunday, only to come back on Tuesday. Families were not allowed in to see their loved ones on Monday and many groups with connections to inmates are reporting abuse towards inmates by prison guards, especially those who spent the last few days banging on windows to communicate with protestors. Lawyers alone cannot fix this crisis; this cannot be resolved by addressing individual clients. The issue is the abusive and exploitative prison system.

Protesters have plans to occupy the entrance to MDC into the week and have set up a system to receive supplies from supporters, with protestors taking shifts to remain at the prison entrance at all hours of the day. A public hearing to address conditions at MDC took place on the morning of February 5th, with activists calling for people to “pack the court.” Groups such as Black and Pink and No New Jails NYC are calling for a larger discussion of prison abolition, and not just detainee welfare.

The lack of adequate heating for inmates in MDC comes in the midst of inmates in Chicago being forced to shovel snow in subzero temperatures, prisons in South Carolina neglecting to evacuate for Hurricane Florence, and prisoners in Northern California being paid $1 a day to fight wildfires that raged so viciously that entire towns were destroyed and residents in surrounding areas were forced to wear smoke-resistant masks. The prison system benefits from the oppression and mistreatment of millions of incarcerated people; only pressure from below forces it to act in even the most basic interests of prisoners like those still waiting for heat and supplies in MDC. 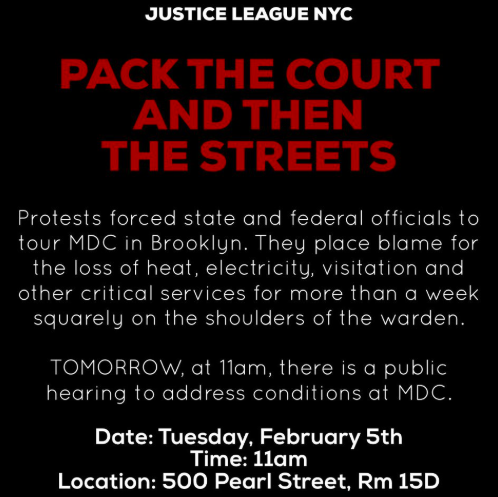