It Was Never About Him: Sanders at the DNC

Sanders completed his surrender on Monday before the assembled delegates of the Democratic Convention. The DNC elite gloat in their victory. What happens now to his “Political Revolution? 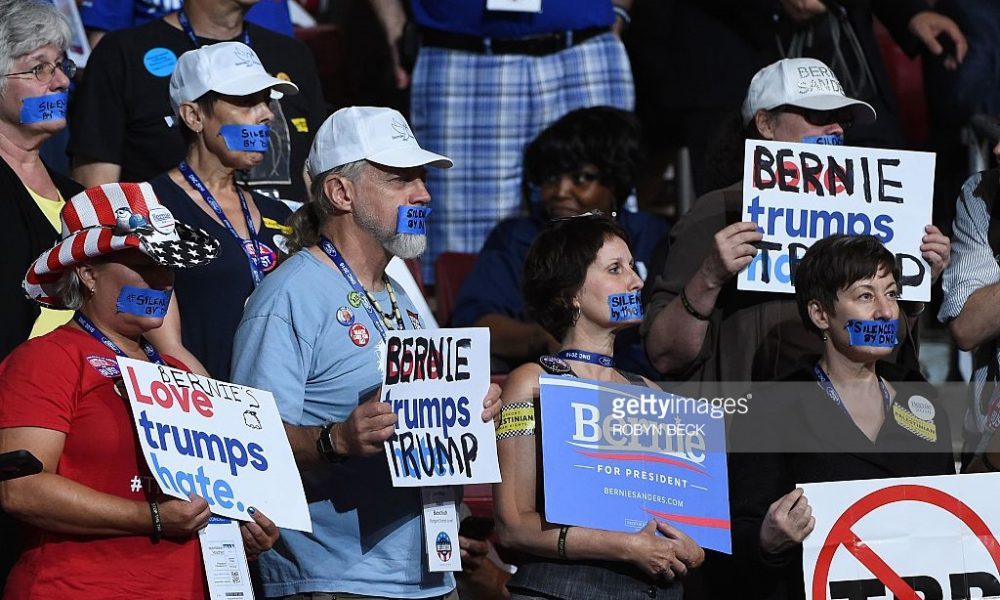 The tone of the convention was set by the release of thousands of DNC emails confirming systematic bias against Sanders’s candidacy. DNC Chairwoman Debbie Wasserman Schultz stated in a leaked email that “he isn’t going to be president.”

As well as bias against Bernie, the emails reveal many of the DNC´s own racist prejudices against Latinos. According to the emails, it is a “known fact” that Latinos are the most “brand loyal” customers in the world. The Democratic Party’s great challenge is that “without a comprehensive brand strategy and plan, the DNC will lose the opportunity to acquire the Hispanic consumer.”

Despite the racist condescension, it is surprisingly honest of the party leadership to confirm that they see themselves as yet another brand like Coke or Pepsi. This week however, their “brand strategy” among Sanders voters is in serious danger.

Far from making an effort to reach out to disgruntled Bernie supporters, the strategy of the DNC and Hillary’s campaign has been to rub the defeat in their faces. The selection of a right-wing neoliberal like Tim Kaine as her running mate already set the tone. That Wasserman Schultz, more or less universally hated by Bernie supporters, has been has been named as an honorary chair of Hillary’s campaign is rubbing salt in the wounds even when there is nothing for Clinton to gain politically.

Flying in the face of the struggles of most working-class Americans, the convention was organized—in contrast to Trump’s slogan—around a theme of America already being great.

Tech CEO Jesse Lipson (we can only wonder how much he donated to get his speaker’s slot) asked the crowd, “Where’s this losing country [Trump] keeps talking about?” Yes Jesse, it’s certainly a great country for Tech CEOs. For the rest of us, not so much.

Lipson went on to declare, “Hillary Clinton knows what every great CEO knows; we’re stronger together.” Which is to say, the CEO is stronger when the workers shut up and follow orders.

Comedian Sarah Silverman took her own chance to tell Bernie supporters to shut up and follow orders, calling Bernie or Bust supporters “ridiculous.”

This arrogant contempt will be a running theme of the convention, and one delivered by both old and new enemies. It has been announced that New York billionaire Michael Bloomberg will be speaking at the convention in support of Hillary. If Sanders delegates couldn’t tolerate Bernie endorsing Clinton, one can only imagine what the scene will be like as they sit through a billionaire praising her.

For all the love that leading Democratic Party figures profess for “compromise,” they were willing to display precious little of it on the convention’s first day. Compromise is something the DNC saves for Republicans like Trump and Ted Cruz. For the left wing of the party, only unconditional surrender will be tolerated.

And unconditional surrender was what Bernie came to deliver.

Sanders was met by a massive standing ovation and tears among the crowd. He started by addressing his supporters, stating, “I understand many are disappointed…none is more disappointed than I am,” but, “That revolution, our revolution continues.” Yet the idea that the revolution will continue through Hillary is not an easy sell.

Sanders defended the record of the Obama years, blaming Bush for the lack of progress. He declared that the struggle would continue: “This election is not about and has never been about Hillary Clinton or Donald Trump or any of the other candidates…this election is about and must be about the needs of the American people and the kind of future we create for our children and our grandchildren.”

Above all, he declared again and again, saying her name 15 times, that Hillary Clinton must be the president and that his supporters must join together to fight for her victory. He painted the Democratic platform as one in which gains had been made and as one for which Hillary would fight. He, like Elizabeth Warren, painted Clinton as far to the left of where she actually is, transplanting his own ideas and the ideas of his supporters onto a candidate who has shown a steely commitment to neoliberal orthodoxy.

The tearful reaction to the speech among Sanders supporters was less about any of the words he said, and more about the act itself—the surrender of a cherished leader. Here, lies the Sanders Campaign and the Dream of the Political Revolution. Its epitaph: “Hillary Clinton must become the next president of the United States”

Yet his supporters, as much as they were devastated by the moment, have not been cowed. Nor does Sanders have the ability or power to completely reign in his movement. Earlier in the day his own delegates booed him when he called on them to support Hillary. Some Bernie supporters in the convention wore tape over their mouths with the words, “Silenced by the DNC.” Pro-Clinton speakers were booed, although their protests were somewhat drowned out by a chorus of Hillary chants.

Outside the convention, protesters took part in civil disobedience. More than 50 were detained and cited by police. While the Democratic Party rightfully mocks Donald Trump’s proposal to build a wall, they had no issue erecting their own eight-foot, four-mile fence around the Wells Fargo Center where the convention is being held.

Yet protests continued. In front of a MSNBC live interview with a DNC representative discussing the resignation of DNC Chair Debbie Schultz, Sanders supporters chanted, “Lock Her Up!”

We have noted that Sanders is no socialist and his candidacy represented no alternative for working people. Still, it is important to consider that, due to the extremely constrained nature of US elections, the Sanders campaign was the first time that people had an opportunity to vote for a relatively more progressive platform (universal health care, a doubling of the federal minimum wage, free higher education) on a national scale within the Democratic primaries in decades.

An entire generation which has grown up in the shadow of the 2008 economic crisis, many of whom passed through student movements in 2009, the Occupy movement in 2011 or Black Lives Matter since 2013, had their first opportunity to vote on the issues that directly affected them in their lifetimes. Constrained by a district and state based winner-takes-all-system, it is only in the presidential elections that national campaigns around political differences within the Democratic Party can emerge.

Sanders became a phenomenon because he expressed the discontent and revolt which many Americans and especially the youth have been feeling since 2008. He challenged a political class which has been discredited in their eyes as one more executioner of the neoliberal consensus. Where in 2008 Obama was able to summon up vague promises of Hope and Change to renovate the Democrats’ image, Clinton’s appeal lies entirely in fear of the other candidate.

For this new post-crisis generation, Sanders’s campaign represents the first major experience of work in the Democratic Party and national electoral politics. The lessons of this experience have been rich: the role of the media and pundits in drowning news of Sanders; the corruption and favoritism of the Democratic Party apparatus; the power of money in politics; the fundamentally capitalist commitment of one of the two arms of “democratic” governance in the U.S.; the lie of a right-wing America for which the left must move to the center to win.

Ultimately, one of the greatest lessons is Monday’s heartbreaking betrayal of the millions who mobilized in Sanders’s name. A betrayal easy to predict, but no less difficult to be felt by them.

Millions of youth, workers, the oppressed know that these candidates do not represent them, that this state does not defend them, that these elites couldn’t care less for their futures or their ideas. Young people who were thrilled by Obama´s election see nothing to hope for in Hillary’s triumph.

These millions will not all stop fighting for their futures. It’s clear that the road to socialism does not pass through the DNC. Yet with one path closed, many more have been revealed. These paths too will be marked by small triumphs, heartbreaking betrayals and dead ends. Yet as lessons are drawn, organizations are forged and the system’s own contradictions drive us forward, the dreams of the masses cannot be betrayed for long.