Italy Calls General Strike: “Our Lives Are Worth More Than Your Profits”

Although Italy is on lockdown, many non-essential sectors are still going to work. Today a general strike is being called to protest the government’s insistence on maintaining “business as usual” in the face of a devastating pandemic. 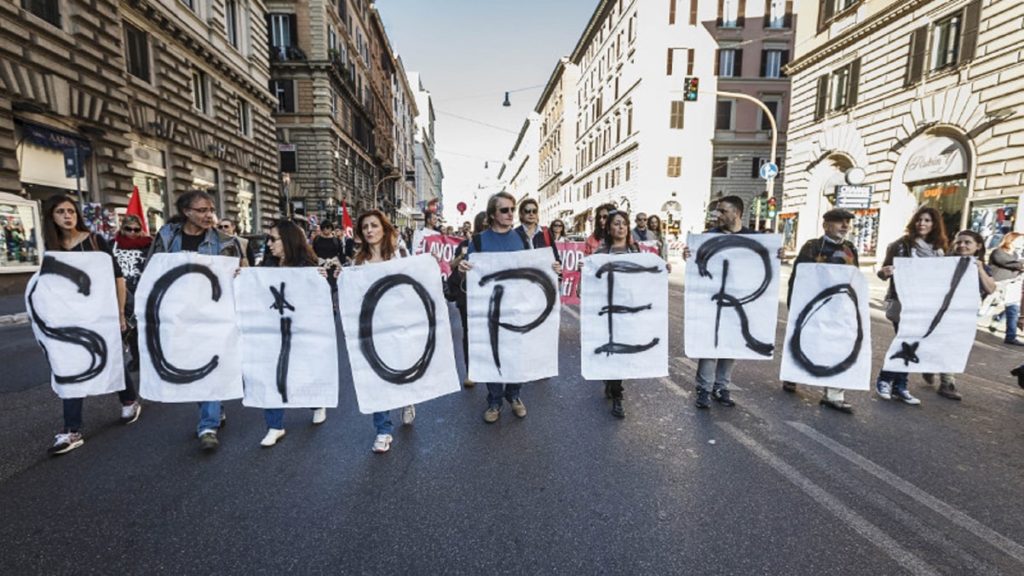 It’s the workers’ revolt. From the metalurgic factories of Lombardy to those of Piedmont, from the steelworks of Piombino to the blast furnaces of Taranto, from the chemical and textile companies to the aerospace companies and the shipyards. Even the builders of the new bridge in Genoa are demanding time off. Strikes and spontaneous protests by those who feel held hostage by work, forced to face coronavirus while the rest of the country stays at home. (La Repubblica)

Italy is the global epicenter of the pandemic, with more than 64,000 cases of infection and almost 7,000 deaths, half of which occurred in the last week. This is the result of both neoliberal austerity measures that defunded healthcare in Italy and the criminal negligence of the EU.

In the context of the pandemic, a quarantine was imposed throughout the country. Not only have nearly all shops been closed, but people are not allowed to stray too far from their homes. Just this week, videos of mayors yelling at their constituents to go home went viral.

Yet, non-essential production has still not been shut down in Italy. Millions of workers continue to go to work every day, exposing themselves to infection in public transport, in factories, workshops, and offices.

At the same time, the workers’ rebellion is growing. Throughout the last few weeks, there have been wildcat strikes by workers around the country. Some of these actions have been organized by unions, demanding personal protective equipment and in some cases a stop to production.

But the Cofindustria, which serves as the country’s chamber of commerce and organizes Italian bosses, is putting pressure on the government to keep open sectors that are not vital to face the pandemic or to the survival of those who are quarantined. They have immense influence over the government’s policies, and have caused it to make drastic changes in its response to the crisis. For example, on March 21, the day that 700 hundred people died in 24 hours, the government announced that all non-essential production would shut down. But the very next day, on March 22, the capitalist lobbying began. Cofindustria wrote a letter to the government saying that companies would run out of funds if production was shut down and that stocks would plummet. On Sunday night, the government complied with their demands, opening up production for some key sectors — those they deemed of “strategic” importance. This meant the re-opening of banks, call centers, aerospace, and the defense industry.

It is in this context that today’s general strike occurs, called by several unions. Even the more bureaucratic unions are currently “allowing” workers to participate in a sickout today. Surely, in the context of anger at the bosses, many will heed the call.

In a letter sent to the government, the USB (Unione Sindacale di Base) said that they had “awaited the announcement of new restrictive measures from the government in the hope of there finally being a stop to private and public production, except those that are indispensable to the crisis.” However, no such measures were announced and the government was “obstinate in keeping the factories and offices open.”

The workers who have gone on strike in recent days are demanding that their workplaces be closed, because workers are being exposed for no other reason than to keep businesses going. They have gone on strike at the risk of reprisals from their employers, but they did so because they are convinced that there is nothing more important than their health and the safety of the whole community.

The USB claims that the public healthcare system has been devastated by repeated cuts in personnel and resources, by privatizations and outsourcing. “The shortage of beds, personnel, and health equipment are some of the factors that aggravate suffering and make it essential to stop activities to avoid the definitive collapse and the difficulty of the sick recovering.”

You may be interested in: A Call for Submissions: Capitalism Will Not Heal the Pandemic

The CISL (Italian Confederation of Trade Unions), the second largest union in Italy and one that has a more conciliatory relationship with the government also approached government officials to demand that it shut down non-essential companies. The CISL threatened to join today’s strike if the government did not comply.

Other unions, such as SiCobas, have spent the last week calling for sickouts from work in warehouses and factories that are not essential to the functioning of the economy during the pandemic. Among sectors of precarious logistics workers, the primarily immigrant workforce that makes up SiCobas has been staging spontaneous strikes over the past few weeks.

A Way Out of the Crisis

The general strike on Wednesday, March 25 is the cry of a working class, rearing its head and saying “our lives are more important than their profits.”

However, in view of the dimension of the current crisis, it is necessary to deploy a program to provide a way out of this public health and social crisis as a whole. The solution cannot be left in the hands of those who created this disaster —  the ruling class that has disarmed public health in recent decades and increased job insecurity.

While many automotive or metallurgical companies are in a position to reconvert their production and put all available resources at the service of producing respirators, masks, and other necessary supplies to combat the pandemic, Confindustria defends the return to “business as usual.”

That is why, La Voce della Lotte  (The Voice of the Struggle), the sister website of Left Voice in Italy points out:

In the face of the disaster to which the capitalists have led us, it is necessary to show that it is the workers themselves who can take all the necessary measures: not only from the point of view of job security, against massive layoffs and the maintenance of wages, but also to provide food and medical resources to the entire poor population — not just a rich minority. This will only be possible if democratic, bottom-up workers’ control can be imposed in the workplace in an attempt to secure and reconvert production to meet social priorities: all non-essential activities must be closed down, all those who will have to continue working must be protected, and the productive apparatus must be converted according to the extraordinary needs of today. We need workers to take control of the whole process.