Italy: Going Out on Strike Against Dying

More than 7,500 people are dead in Italy as of March 25 — but workers are told they must continue to work, even in jobs that are absolutely not essential to the fight against COVID-19. Amid great social anger and the maneuvers of trade union leaders, Italy’s workers went out on strike March 25 to say that their health and the fight against the coronavirus come before profits. 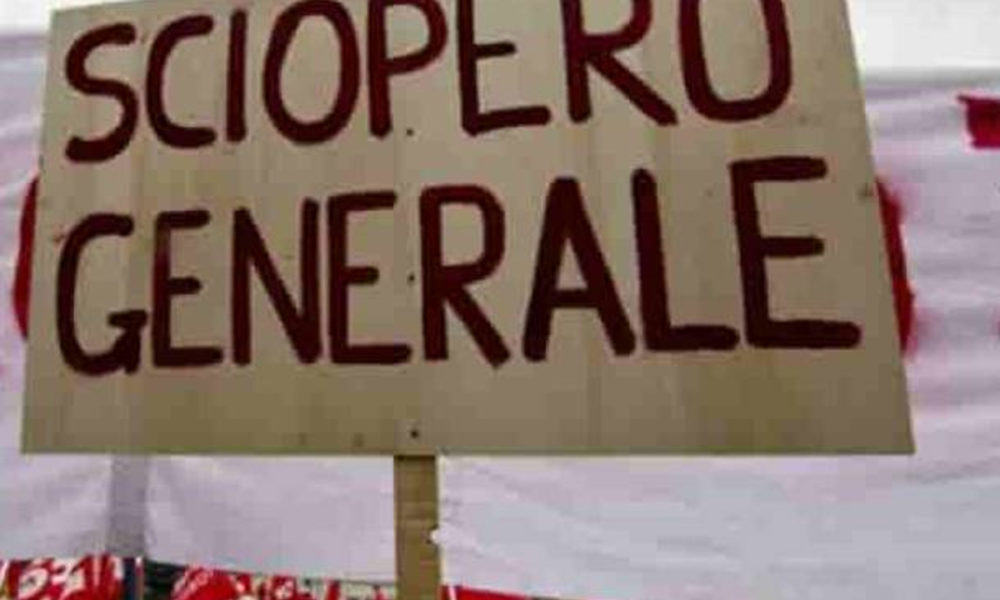 Italy is one of the epicenters of the coronavirus crisis, with three regions in the north of the country especially affected: Lombardy, Veneto, and Emilia-Romagna. Since the beginning of the month, the Conte government (an alliance of the center-left and the right-wing Five Star Movement) has strengthened containment measures. An initial decree on March 1 divided the country into three zones. It was followed by school and university closures on March 4. Then, on March 9, the government designated the entire country as a “red zone” in “containment” mode. On March 21, all “non-essential activities” were suspended until April 3. Yet as in France, despite the rapid spread of COVID-19, work in Italy continues in many sectors. These are the conditions that preceded the powerful strike that took place in Italy on March 25.

At the Strike’s Origin, a Government Retreat Under Pressure from Employers

The spark that transformed boredom into anger and strike action on March 25 came from the false promises of Italy’s prime minister. In a speech on March 21, Giuseppe Conte promised the closure of all non-essential activities with few exceptions, particularly food, energy, pharmaceuticals, and transport industries.

But Italian business associations did not listen to Conte. Only a few hours later, under pressure from several sectors of the business community, including Confindustria (the General Confederation of Italian Industry, an organization of Italy’s bosses), the government added several paragraphs to the initial article in its decree, which had already been published. It was amended to allow exceptions for “functional activities for the continuity of essential activities” (a formula almost dictated verbatim by Vincenzo Boccia, president of Confindustria) as well as for “sectors of strategic importance to the economy.” Thus, the working sectors have been expanded beyond arms and aeronautics manufacturers to include domestic appliances, the tire industry, large portions of the textile sector, construction and public works, and a good part of the machine sector, metalworking, and steel. For proof of Cofindustria’s influence over the government, one need only consider that as of March 24, the Marcegaglia group — whose president once led Confindustria — continued to operate its Boltiere rolling mills (an absolutely non-essential activity) in Bergamo, one of the regions most affected since the outbreak of the pandemic with over a thousand deaths to date.

In light of these developments, initial agreements made with the government at the outset of the crisis by Italy’s three trade union confederations — the CGIL (linked to the Democratic Party in the government), CISL, and UIL — soon began to backfire on the union bureaucracy. The confederations initially signed an agreement with the government and Confindustria on March 14 that stipulated the unions’ involvement in decisions on whether to keep businesses open. But locally, in the companies, facilities, and warehouses, the situation became much more tense over just the last 10 days — leading 490 companies allowed by the decrees to continue to operate to decide instead to close. The choice sometimes fell to this or that group of employees faced with empty order books, but in most cases the closure came after disputes with, or even strikes, by workers.

So, for about 10 days, activities have been suspended or paralyzed by strikes in several sectors where “rank-and-file unions” are active, including the shipbuilding industry (Fincantieri), the auto industry (several Fiat sites have been closed; Ferrari’s site in Modena has been closed by the workers), steel (ArcelorMittal Genoa), Whirlpool and Electrolux, and even in logistics sectors.

Since Monday, March 23, with Conte’s response to the employers’ demands, the situation has escalated, with strikes in the aeronautics sector, in particular at Leonardo (36,000 employees), Gavio, and LGS, but also at the Safilo eyewear group (where the unions have proposed converting luxury production to make protective masks), and in the metalworking sector in Padua, where workers, at the request of the three subsidiary federations FIOM-FIM-UILM, went on strike on March 24 for 48 hours.

Union-Government Negotiations and the March 25 Strike

Within this framework, the union leaders — under pressure from the rank and file — had no choice but to speak up and pound their fist on the table. Pressed against a wall, the government also backed down on Wednesday, with concessions to the CGIL, CISL, and UIL leaderships, including a reconfiguration of so-called “non-essential activities” and a return of the Workplace Representation agreement with local unions (RSU) on opening or keeping closed workplaces and businesses. The unions, which threatened to strike, now say they are completely satisfied. The executive branch of government, therefore, is expected to issue a new decree. But Conte is still under pressure from opposing social forces.

A new decree that expands the sectors of activity that will be closed until April 3, however, may not be enough to calm the anger of workers worried about their health and that of their loved ones. And it may not be enough to satisfy employers who still want to keep their businesses running and make a profit no matter the cost.

In fact, in addition to the national strike called on March 25 by the Unione Sindicale di Base, one of Italy’s “rank-and-file unions,” it was the metallurgical workers of FIOM-FIM-UILM in Lombardy and Lazio who supported the strike call, even when the confederations that agitated for the strike withdrew when the government opened the door to negotiations.

Participation in the March 25 strike, which severely crippled the economy in both regions, ranged from 60 to 90 percent. In Brianza, for example there was 70 percent participation. Other sectors have also been brought to a halt, including paper, textile, and chemical industries. Meanwhile, there have been calls for strikes in the coming days in the supermarkets of Liguria, Molise, and Abruzzo. In all these cases, the appeals are being launched by the CGIL, CISL, and UIL branch federations, which have not experienced such pressure from below for many years.

The situation may seem paradoxical, but it is rich in lessons for the working class around the world. While prior to this workers on the Italian peninsula were far from being on the offensive, a series of moves — often spontaneous or at least not orchestrated by the traditional trade union leaderships — have forced employers to back down, even though the situation (in terms of the number of deaths, hospitalized patients, and infected people) is extremely difficult.

At the same time, despite the popularity of the government, workers have demonstrated in recent days their ability to make their voices heard and confront the ongoing assault being waged against them in the name of the fight against the epidemic. This determination to fight came to a head with the March 25 strike.

In the Spanish State, the strike of the Mercedes workers in Vitoria showed the same willingness of sectors of the working class to defend not only their health, but also that of their families and communities. They refused to work without the minimum conditions for safety and hygiene. Airbus workers in France are demanding the same thing, and have called a strike for March 30. At the same time, in many workplaces, from call centers to post offices and workshops, reports are coming in that workers do not have masks or adequate gloves and other protection. The selfishness of the bosses puts the lives of these workers and all of society at risk.

In the coming days and weeks in Italy, as in France and Spain, it will be essential in workplaces and the productive sectors that we, as a class, take the reins to put our health before the bosses’ profits. This may mean closing what is not essential or imposing — under our own control — the conversion of industrial activities. We must demand the nationalization of these companies by the state. It is no coincidence, given this perspective, that the media is maintaining a nearly total blackout — at least so far — of the strike actions in Italy.