It’s All A Game To Them

The recent NYT endorsement of Elizabeth Warren and Amy Klobuchar was rolled out like it was a reality show. The bourgeois media keeps revealing that they want to treat politics like it is a game. 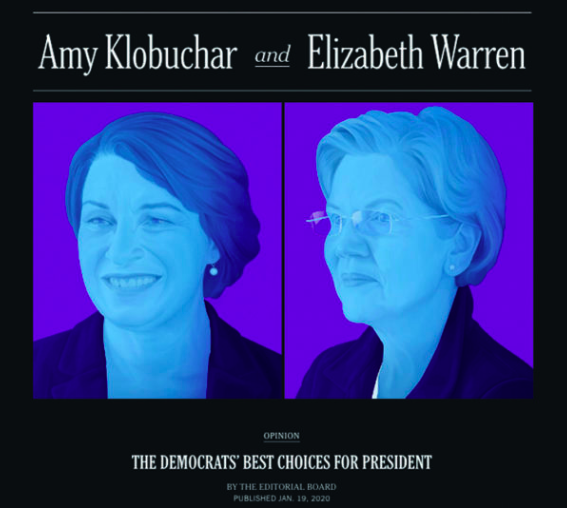 The New York Times announced on Sunday that they are endorsing Elizabeth Warren and Amy Klobuchar in the Democratic primary. This decision is surprising both in content and in form. It is certainly unusual for a newspaper to endorse two candidates who are at least nominally opponents. On top of that, Klobuchar is an especially strange choice to endorse, since she is polling at around 3% nationally. Given that the Democratic field is narrowing to essentially four candidates — Biden, Sanders, Warren, and Buttigieg — ahead of the upcoming Iowa Caucus, endorsing a marginal candidate makes the New York Times seem especially out of touch with the current political reality. Additionally, the rationale they gave for endorsing candidates who disagree on several key issues was even more bizarre. They wrote that “both the radical and the realist models warrant serious consideration. If there were ever a time to be open to new ideas, it is now. If there were ever a time to seek stability, now is it.” This “either a or b” approach was widely mocked, even in the pages of the equally mainstream Washington Post. In the face of the political polarization of Trump and Sanders’ populism, the New York Times’ position seems confusing but in essence can be read as: anything but populism.

The endorsement was also strongly criticized for the way that it was released. Instead of following the usual method of announcing an endorsement — publishing an op-ed explaining why a certain candidate should be supported — the New York Times editorial board chose to bring what they called “transparency” to the process. This “transparency” took the form of daily televised episodes of the editorial board sitting down to interview the different candidates, all edited to look as dramatic as possible. This culminated in the endorsement article being published. This unusual rollout has correctly been criticized for revealing what a charade the whole process of endorsement was. The New York Times has revealed that they — and the rest of the bourgeois media — view politics as a game and are happy to treat it as such. They don’t seriously engage with any candidate’s proposals because any proposal that keeps the establishment safe is fine with them. Any serious challenge to the status quo is anathema to them, and they are not opposed to movements designed to win reforms but are actively trying to suppress them. The mission of the Times  and all other elements of the capitalist media is simple: to provide legitimacy to the institutions of the state and seek to undermine any attempt to attack them. That is why the Times is so opposed to Trump; it isn’t that they have great political differences with him, but that he delegitimizes the institutions that respectable bourgeois democracy rely upon to justify their hegemony.

All The News That Fits The Narrative

The Times’ editorial board hoped that their series of filmed interviews with each candidate would reveal what rigorous vetting they did in order to make their endorsement. However, what the videos actually reveal is how myopic and out-of-touch the Times is. They are so focused on protecting the most immature understanding of liberal democracy that they are ignoring the political realities of America today. What polls show us that the average person cares about are bread and butter issues like high-cost of health care, the declining economy, and crippling student loan debt. The Times’ vision of how liberal democracy operates can most closely be compared to Schoolhouse Rock, with a very high value placed on compromise and bi-partisan cooperation. Question after question revealed this. They asked Joe Biden about his exercise routine and Andrew Yang about Saturday Night Live in-between asking every single candidate many different variations of “how are you going to do [blank].” There is nothing wrong with interrogating a candidate’s strategy, but when the strategy becomes the program, you no longer have an analysis of what is actually going on. The way that a candidate intends to accomplish what they want to do cannot be substituted for what it is that they want to do. That is respectability politics at its worst because it allows candidates to hide behind decorum and bipartisanship as they enact austerity and imperialism.

The New York Times’ bias was evident in their much maligned interview with Bernie Sanders in which they asked Sanders how his well-attended rallies were different than Donald Trump’s well-attended rallies. This is indicative of the level of intellectual rigour that the editorial board practiced throughout the endorsement process. Indeed, the editorial board made several comparisons between Trump and Sanders, arguing that they would have a similar strategy of conducting themselves as president. This critique erases all notion of program. Though Sanders and Trump have different political programs, the Times would have you believe that because they both challenge the establishment, have large rallies, and don’t want to compromise on their political ideologies, that they are one in the same. But what Sanders and Trump are proposing are very different. As just one example, Trump tried to undo Obamacare while Sanders proposes Medicare for All.  Just because Sanders and Trump tap into the same rage at the establishment does not make them similar. This apolitical analysis should remove all respectability and seriousness from the so-called paper of record. While there are many valid reasons to not support Sanders, the fact that he is able to rally mass popular support is certainly not one of them. In fact, the proposals of the Sanders campaign that make him a popular figure — like Medicare For All and student loan forgiveness — are both important demands to support and some of the very reasons that the Times didn’t endorse Sanders.

The whole notion of a newspaper endorsement is based around the idea that the paper is throwing its ideological support behind one candidate over others. By endorsing two candidates with different ideologies, the Times has effectively delegitimized the entire endorsement industry. They have also revealed that they are actively trying to undermine the progressive social movements calling for reforms. The Times just wants a president who will work with Congress, and they’re worried that Sanders might have too much “ideological rigidity and overreach” if elected. That being too ideological when running for president is a criticism reveals all that you need to know about the New York Times and how they feel about politics. It doesn’t matter who wins to them as long as their Aaron Sorkin-esque idea of bourgeois democracy continues unchecked.

The decision to endorse Warren represents this. In the endorsement, the Times attempts to position her as the ‘good’ progressive in the race because she is willing to compromise. They even shouted out her compromise on Medicare For All as a reason why they are more willing to support her over Sanders. The editorial board recognizes that Warren will not present any meaningful changes to the establishment because she is willing to backtrack on even moderate reforms, calls herself a “proud capitalist,” and has a mainstream imperialist foreign policy.

Klobuchar is an interesting choice in that her platform is closer to the Times’ politics, but she is far less of a contender than Warren. It is possible that the editorial board hopes to play kingmaker and revitalize Klobuchar’s campaign in the last few weeks before voting begins. It is also possible that they wanted to be seen as taking a stand without actually wading into the battle between Biden and Sanders. Klobuchar is the type of candidate who in previous contests would have probably fared better than she is now, given that she is a centrist with a strong resume. However, as the Times themselves recognized, the current debate in the Democratic primaries is deeper and more existential than in most years. The question is not which candidate to support, but what sort of platform the party should adopt. Klobuchar represents the right plank of that. By exempting themselves from the actual debate, they allow — at least theoretically — both sides of the Democratic Party to continue reading the Times.

The Gamification of Politics

The way that the Times endorsement was rolled out is important. The endorsement, alone with CNN’s dramatic release of audio the day after the Democratic Debate, shows the gamification of national politics that the bourgeois media has been engaging in. The actual political situation has taken a backseat to the drama of it all. Actual political disagreements and differences have been replaced with feuds. The election has become a reality show, with commenters breathlessly covering who’s up and who’s down. This gamification is just another way that the mainstream media is attempting to sell to us. They have commercialized political unease and are using the increased political awareness in the country to sell ad time and advance their ideology.

There is no greater advocate for the moral authority of journalists than journalists themselves. The self-seriousness of the Times editorial board is palpable throughout the video interviews, as if they are the sole arbitrators of what is true and correct in modern politics. It can be easy to fall into believing, uncritically, the news of so-called objective journalists. But the bourgeois media has as much invested in maintaining the status quo as politicians and business leaders do. We must be critical and carefully analyze the narratives that the bourgeois media try to sell us at all turns. Politics is not a game, and treating it as such does a great disservice to those who are materially impacted by decisions made by the ruling class. Politics matter, and the program of every candidate should be thoroughly interrogated. The New York Times’ mask is off, and we see them for what they are: shallow defenders of the status quo who are deeply afraid of any movement of the working class.