Jeff Bezos Gets a Prize in Berlin, Hundreds of Amazon Workers Protest

The head of Amazon received a prize in Berlin for his “visionary entrepreneurship”. Outside, hundreds of his employees from across Europe were protesting. 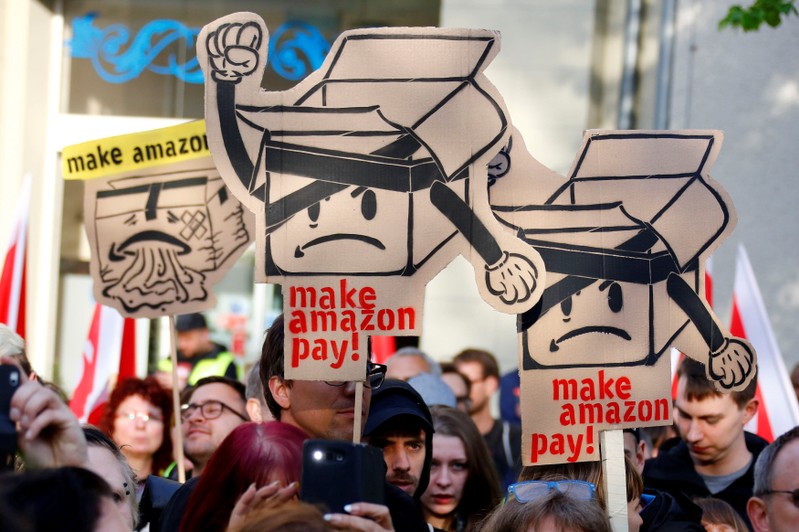 Jeff Bezos is the richest man on earth, with a net worth of 125 billion US dollars. On Wednesday, he was also the recipient of the Axel Springer Award for his “visionary entrepreneurship“.

How does one person get so much money?

By exploiting the labour of lots and lots of workers.

During the award ceremony at the Axel Springer Tower in Berlin on Wednesday night, hundreds of Amazon workers gathered outside to protest against their boss. They were demanding better wages, trade union representation and an end to the constant surveillance. Amazon workers are regularly terrorized by their bosses with so-called “feedback conversations”. They wanted to give their own feedback to Bezos: “Our wages are too low!”

Workers had come together from six different Fulfillment Centers all across Germany. The service sector union ver.di had called for a strike. There was also a large delegation from Poland, with white-blue flags from the trade union Solidarność and red-black flags from the anarcho-syndicalist union Inicjatywa Pracownicza. More workers came from Amazon centers in the Spanish State and Italy, and there were solidarity messages from the United States.

Marc Blanes, a worker from the Amazon warehouse in Madrid, reported about their first strike on March 31 — a full 95 percent of workers participated! “But we know that a single Fulfillment Center can’t do much against a gigantic monster like Amazon”, Blanes said in his speech. “We need a European strike!”

The rally had been prepared by the bureaucracy of the trade union ver.di — they had hired a professional samba band and even rented a jumbo-tron. There were speeches by Bernd Riexinger, co-leader of the left party DIE LINKE, and Andrea Nahles, chairperson of the social democratic SPD. Nahles was booed when she tried to speak. People called out: “Piss off!” and “Who betrayed us? Social Democrats!” Nahles–who served as Labour Minister under Merkel less than a year ago–and her party are responsible for the labor reforms that legalized the kind of limited contracts Amazon relies on.

Axel Springer was the founder of a right-wing media empire in West Berlin — kind of like the Rupert Murdoch of Germany. His company still puts out the most widely read newspaper in the country (if you can call a racist tabloid like the BILD a newspaper).