Jeremy Corbyn’s Labour Party Suspension: What it Means for the Left

Jeremy Corbyn was suspended from the Labour Party on Thursday because of his reaction to a report about antisemitism in the Labour Party. But the truth of the matter is that this is part of a larger attack on both Corbyn and the pro-Palestine Left which also reveals the failures of Corbyn’s strategy of reforming the Labour Party. 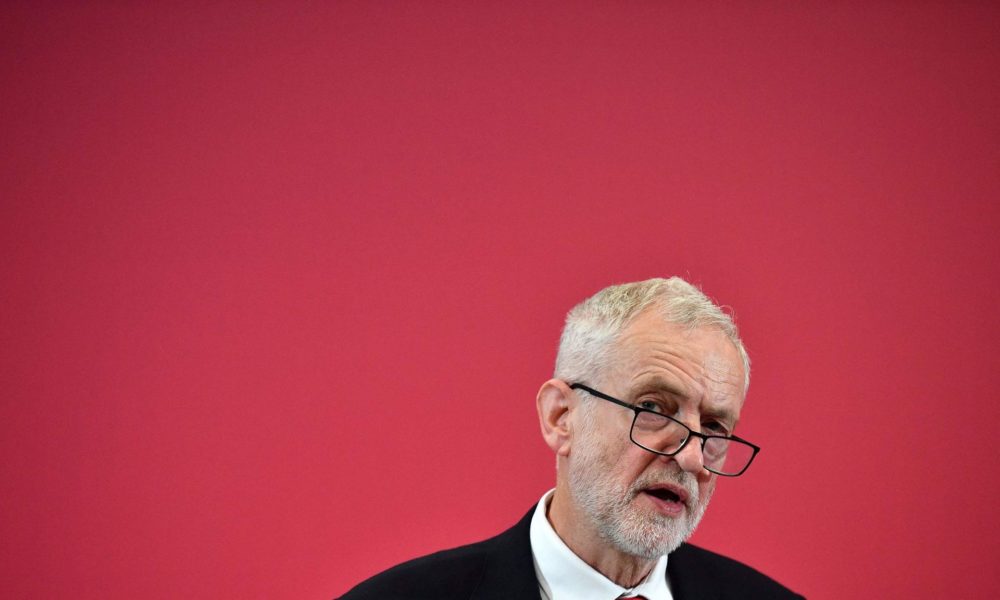 Sectors of the international Left were thrown into outrage on Thursday when it was announced the Labour Party had suspended their former leader Jeremy Corbyn due to his reaction to a report about antisemitism in the Labour Party. The report from the Equality and Human Rights Commission (EHRC) argued that Corbyn’s leadership mishandled charges of antisemitism but didn’t accuse Corbyn himself of making any antisemetic comments.

The report argues that antisemitism is a problem within the Labour Party, that Corbyn’s leadership mishandled accusations (many of which revolved around social media), and that the Labour Party may have broken the law in regard to the way they handled these accusations. It is important to note that the EHRC is far from a neutral institution. It is full of establishment and business figures, many of whom have strong ties to the Conservative Party. In this sense, the EHRC report should be taken with some caution, as it is part of a larger establishment attack on Corbyn and the pro-Palestine Left in general.

In his response (which got him suspended), Corbyn argued that “one antisemite is one too many” in the Labour Party but also argued that “the scale of the problem was also dramatically overstated for political reasons by our opponents inside and outside the party, as well as by much of the media.” For this he was suspended.

Many correctly called out this charge as being entirely politically motivated both to discredit Corbyn (as had been done during his entire tenure as leader) and attack those who support Palestine. Jewish Voice for Labour put out a statement defending Corbyn and arguing that the charges of law breaking are under dispute.

However, what this suspension really shows is that the Corbynist project has been completely defeated and the right wing of Labour has fully re-taken the party. The campaign of using false accusations of antisemitism to purge members of the Labour left has been the practice since Corbyn was first elected. However, his suspension represents an important and dangerous escalation of that strategy.

While many will (correctly) condemn Keir Starmer and other members of the Labour Right for their actions, we also must be clear eyed about what this defeat means for the Left and Corbyn’s larger strategy.

Sir Keir Starmer was knighted for his services as chief prosecutor. This title alone should tell you all you need to know about his politics. His leadership of the Labour Party has been based around systematically disassembling the Corbynist project and taking the party back to the days of Blair.  He has called for schools to be reopened in the midst of the pandemic — going so far as to tell Prime Minister Boris Johnson that it was his “moral duty” to re-open them. Starmer also controversially refused to oppose a bill that allows undercover government agents to commit crimes which led to 34 Labour MPs breaking party discipline.

Starmer has used the accusation of antisemitism to attack members of the left for his entire time in Leadership. He fired his Corbynist opponent Rebecca Long-Bailey from the shadow cabinet for, supposedly, telling a story that included an “antisemitic conspiracy theory.” That “conspiracy theory” was that the U.S. police who killed George Floyd were trained by the Israeli Defense Force (IDF). While, in this specific case, that statement was untrue (and Long-Bailey supported making a correction) it is absolutely true that U.S. police forces often collaborate with the IDF for training.

Starmer and his allies also reprimanded Labour MP (and son of former leader Neil Kinnock) Stephen Kinnock for making a speech in Parliament that denounced the Israeli occupation of the West Bank. Starmer allies argued publicly that Kinnock has “a long record of singling out Israel with over-the-top criticism.” Kinnock’s speech opposed Israeli annexation in the West Bank and said their actions were  “tantamount to profiting from the proceeds of crime.” The annexation of the West Bank is, as the New York Times put it a “brazen violation of international law” meaning that Kinnock was absolutely correct that Israel is profiting from the proceeds of crime.

Antisemitism is, of course, a serious problem that should be vehemently opposed by the Left.. But criticizing the state of Israel is not antisemetic. At  a time whenJews are being assaulted at increasing rates, it is offensive in the highest degree to suggest that the true evil of antisemitism is criticism of Israel. Anti-zionism is not antisemitism. Indeed, Starmer and his allies are cynically using antisemitism to silence leftist critics. This goes hand in hand with the way that other figures, including Christian fundamentalist Mike Pompeo, use accusations of antisemitism to silence all criticism of Zionism.

While Starmer’s actions are, of course, inexcusable and solidarity must be given to Corbyn and all other supporters of Palestinian liberation, we should be crystal clear that Corbyn’s strategy has been totally defeated. Like Bernie Sanders in the U.S., Corbyn has become a very popular figure especially among young people because he seemed to offer an alternative to the capitalist order. He gave incredible speeches, talked openly about the need for socialism, and had been high-profile in various struggles for decades. Corbyn was swept to leadership and then defended while he was there by a grassroots movement, the Labour establishment was always opposed to Corbyn and his project.

For a few years, Corbyn seemed to many like the shining example of how a popular politician could recapture a party that had gone to the right and reorient it towards the working class. He got better than expected election results, put forward policy that brought a huge number of new people into the Labour Party, and was strengthening the relationship between the party and the unions.

The question then becomes: how did it all go wrong? How did Corbyn go from fighting a leadership challenge with a massive grassroots movement, to being suspended from his own party?

This current situation happened because Corbyn’s strategy always neglected the fact that the Labour Party was a bourgeois workers’ party. This is important because, even if Corbyn was able to shift some of its  policies, he couldn’t change the nature of the party he was in. We can see this in his inability to change Blair’s alteration to Clause IV. The Labour Party is, and always has been, a party of imperialism and, in the age of Blair, became the leader of neoliberalism in the UK. They started the Iraq War and they imposed tuition fees (something that even Margaret Thatcher wasn’t able to do). Corbyn’s strategy relied upon using a party that serves the bourgeois order to challenge the bourgeois order.This was always a failing proposition and has ended with Corbyn himself being exiled from the party that he rebuilt.

This is what reformism does. It channels public discontent with the capitalist order into a political project that never actually has the best interests of the working class at its center. Then, eventually, they will betray the working class — specifically because their project was never about actually winning liberation. The millions of people who supported them then become disillusioned with politics and pull back either from the Left or politics in general. An “anti-politics” sector emerges that disregards all electoral politics or, worse, a sector drifts to the right, hoping that they will have the answers that the reformist Left proved they didn’t.

History is littered with examples. There is the example of Greece which went from electing Syriza — a party of the reformist left — to its current right-wing government. Syriza used the Greek people’s anger to get elected and then betrayed them. This is also the story of Podemos in the Spanish State and of all the Pink Tide governments in Latin America. Popular “left” figures build off public anger to get power and then betray the working classes who got them there. Evo Morales did it in Bolivia, Hugo Chavez did it in Venezuela, AMLO did it in Mexico, and Tony Blair did it in the UK. Just this week, the supposedly “left” Argentine government violently evicted a land occupation in Guernica.

Jeremy Corbyn never got enough power to betray his base on such a level, but it is important to understand that this is the lineage which Corbyn is a part of. Just this year, he wrote an article for Jacobin Magazine about what he learned from former Chilean president Salvador Allende, whose strategy of winning socialism through elections ended with a violent coup, his assissination, and an incredibly brutal dictatorship. This is who Corbyn looked up to, a leader whose strategy led the working class to decades of oppression at the hands of a U.S.-backed coup.

The fact of the matter is that we will not win socialism at the ballot box and we certainly won’t win it through bourgeois parties. At the end of the day, the only thing that Corbyn truly achieved was re-building Labour from the wreckage of Blairism. His policies brought thousands of young people into the party so that Keir Starmer and his reactionary leadership could return it back to the politics of Blair.

The solutions for the working class don’t lay in Labour, just as they don’t lay in the Democratic Party. Indeed, neo-reformists who tell us that the answer is just to slowly fix the capitalist state do not have our best interests at heart. Rather, we must understand that the value of electoral politics lies in the ability to dialogue with masses of workers about a leftist politics. We will not — we can not — win socialism at the ballot box. Corbyn’s hero Allende shows us this. Allende was the picture perfect reformist: he rallied the people, he won the election, he began to move forward on a leftwing platform but — because he refused the need for revolution — he left the working class totally defenseless in the face of General Pinochet and his U.S. masters. Indeed, the history of reformism as a strategy shows us that it ends in only three places: defeat, betrayal, or destruction. Corbyn got the first, Syriza the second, and Allende the third.

We are in some of the most dynamic political times in recent memory. The growing capitalist crisis is only deepening as the pandemic and resulting economic crisis is growing. Now is the time for militant worker organizations fighting for socialist revolution, not tepid hopes of slowly shifting the capitalist state. Corbyn is and has been the victim of some of the worst smears in modern politics and, for that, he must be defended. However we must understand that this current situation was created, in part, by the failed strategy of reformism. The working class and the most oppressed cannot follow that strategy. Not now, not anymore, not ever again.