Roughly 100 unionized workers at websites under the G/O Media umbrella such as Jezebel and The Root went on strike Tuesday after the union’s contract expired. Among their central demands is trans-inclusive healthcare coverage for workers. 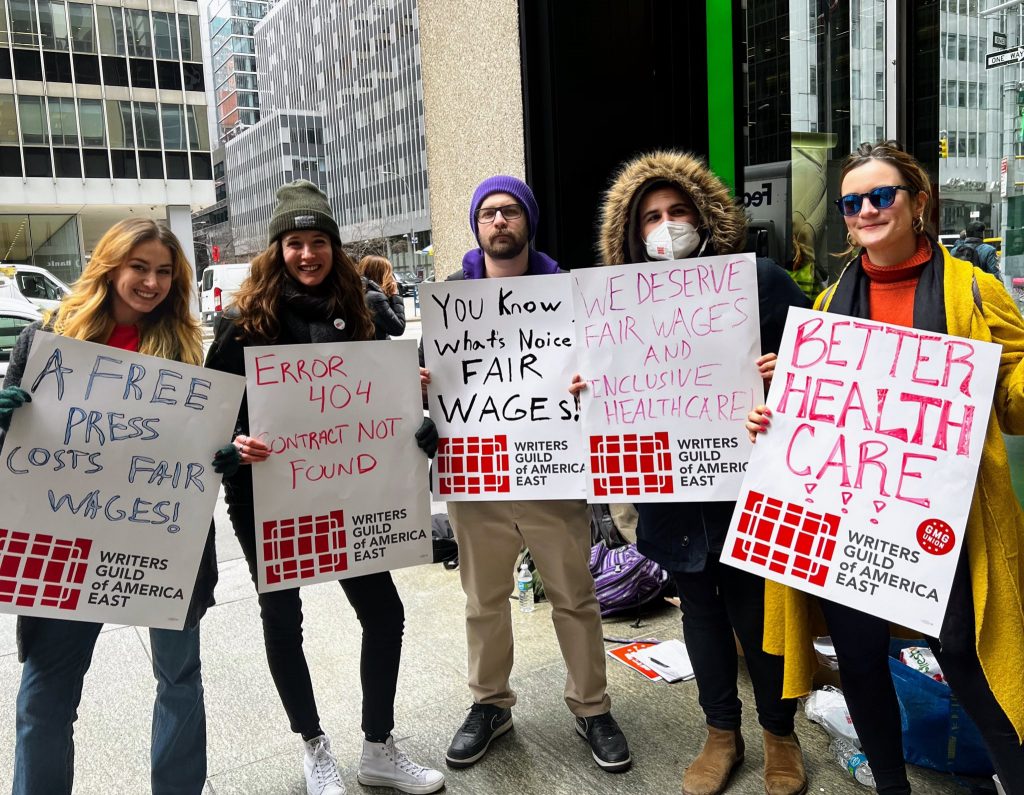 About 100 unionized reporters, editors, artists, podcasters, social media specialists, and videographers at sites such as Jezebel, The Root, Lifehacker, Kotaku, Jalopnik and Gizmodo went on strike Tuesday after the Gizmodo Media Group (GMG) Union’s contract expired. The GMG Union is a shop of the Writers Guild of America, East, a labor union representing thousands of members who write content for motion pictures, television, news, and digital media. The union broke ground as the first digital media union when it was organized in 2015. It is also now the first digital media union to go on an open-ended strike for a fair contract, with 100 percent of members voting in favor of a strike of the 93 percent of members that voted.

The union’s contract expired Monday night and workers claim that G/O Media, a media conglomerate that comprises the aforementioned publications as well as The A.V. Club, The Takeout, The Onion, and The Inventory, has stalled its negotiations. These workers are fighting for trans-inclusive health care coverage, higher salaries in the wake of inflation and the pandemic, work-from-home flexibility, protection against forced relocations to NYC, additional parental leave, caps on health care costs, and increased efforts to hire diverse candidates. CEO of G/O Media Jim Spanfeller claimed that the terms offered to the GMG Union were equivalent to or even better than terms agreed to by The Onion Union (a sister union at G/O) and said that management is “struggling to understand why terms agreed to by half the editorial union members last year are not acceptable to the other half now.”

Murjani Rawls, a striking worker and writer at The Root, said:

We firmly believe that the things that we’re fighting for in this new contract would greatly improve every creator’s life that works at G/O Media. That includes better wages, better healthcare, which also is inclusionary to our trans- and nonbinary-identifying friends and staff, and also better work-from-home options. It’s 2022. Inflation is still high. The pandemic has changed the way we look at work.

According to the union’s website, G/O Media management insists on removing all guarantees that their current healthcare benefits and cost-sharing will continue and refuses to codify the widely accepted World Professional Association for Transgender Health’s standards of care. Amidst a pandemic that has affected the health status of large swaths of the working class and attacks on trans rights across the U.S., especially in Texas, it is absolutely abominable for management to attack workers’ rights to affordable health care and trans health care coverage. These workers are fighting explicitly for the rights of their trans, non-binary, and gender-expansive coworkers in their bargaining agreement — a struggle that all unions should be taking up. The working class is trans, queer, and of color, and this struggle is an excellent example of how we can take up the fight for specially oppressed workers from where we have the most power: our workplaces.

As the union’s website states, “Labor is entitled to all it creates.” Workers should get to decide the conditions of their labor and their workplaces. This struggle and its militancy should serve as an inspiration to all workers. When we use the power of our labor to strike, it fundamentally changes the terrain of struggle.