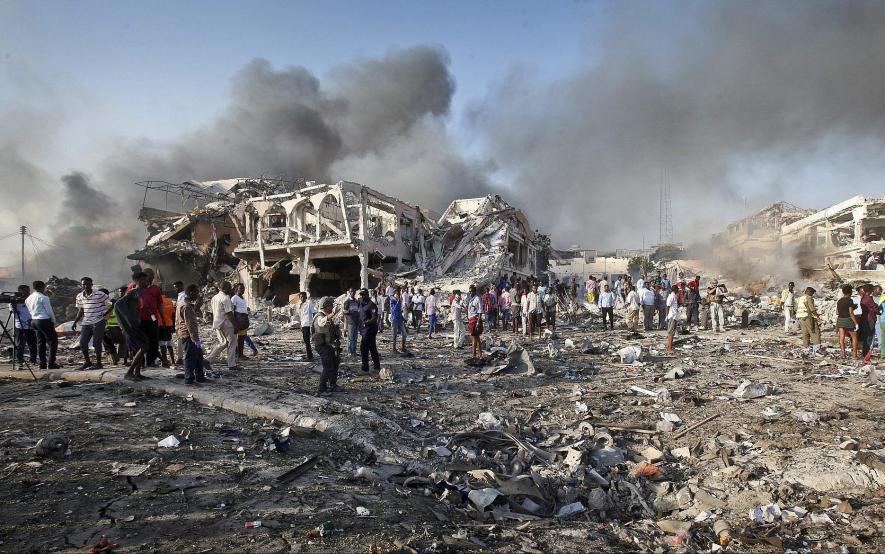 On Tuesday July 20, the U.S. launched its first airstrike against Somalia since Biden took office in January. Allegedly, the airstrike targeted al-Shabaab, a jihadist organization that has profiliferated throughout Somalia, particularly in the city of Galkayo in central Somalia. It has not yet been independently verified whether any civilians were wounded or killed by the airstrike. Only a few days later, the U.S. carried out its second bombing of Somalia.

The Somali government claimed that the airstrike “destroyed al-Shabaab fighters and weapons with zero civilian casualties.” In other words, U.S. drone strikes executed Somali people on Tuesday and again on Friday. And we should interrogate the idea that “zero civilians” were murdered. Last year Amnesty International found that the United States Africa Command (AFRICOM) had carried out significantly more airstrikes than it claimed in the past and that it did not acknowledge the deaths of at least 21 civilians and the injuries of at least 11 others.

From January to late April 2020 alone, the U.S. conducted 39 airstrikes in Somalia. This was amidst the rise of the coronavirus pandemic in a country with already insufficient healthcare infrastructure due to decades of military conflict spurred by U.S. foreign intervention targeting al-Shabaab. By mid-December 2020, Trump ordered the removal of all 700 troops, amidst a general move to take military forces out of certain areas, including Iraq and Afghanistan​​​​. The day before Biden was inaugurated, January 19, 2021, AFRICOM announced it had killed three al-Shabaab members in two airstrikes in Jamaame and Deb Scinnele.

Biden came into office promising that he would limit the use of drone strikes, seeking to distance himself from Barack Obama who greatly expanded drone strikes in his Presidency — an administration in which Biden was second-in-command. But he has clearly turned back on this promise to limit the use of drones outside of U.S. sites of war operations, which was supposed to be a contrast to Trump’s policy of giving the military carte blanche in imperialized countries. The U.S. Marine Corps Brigade General Thomas Savage, AFRICOM’s deputy director of operations, said the “strike was conducted under collective self-defense authority,” which according to the Pentagon means that the military did not need White House approval to continue with the drone strikes. This means that Biden has essentially given the U.S. military the power to act however they see fit, regardless of the amount of damage that ensues. After being elected and inaugurated, as he has proven time and time again, Biden is willing to do whatever he needs to do to preserve U.S. hegemony, that is, to maintain the U.S. empire’s power and influence in the world, whether that be through more diplomatic tactics such as economic sanctions on Cuba, sanctions that worsened the water crisis in Iran, or G7 statements against China, or more overt military strategies like resuming drone strikes in Somalia. Whether it is through treaties, diplomacy or bombs, the U.S. seeks to maintain their hegemony, which will bring misery to the working class and oppressed around the world.

Member of the Squad, Ilhan Omar, has denounced the airstrikes because of how they were authorized, sending President Biden a letter questioning his rationale behind the first drone strike in Somalia, and seeking to hold his administration accountable to a promise it made to compensate families of civilians killed by American airstrikes with condolence payments. The concept of killing civilians and paying off their families is atrocious, and it is also heinous that even that paltry condolence isn’t actualized. Many of the questions in the letter, which Omar posted on Twitter, still legitimize imperialist bombings for “security” reasons. For example, Omar asks “Does your Administration see this strike as authorized by the 2001 AUMF, Article II authorities, or some other legal authority?” The Authorization for Use of Military Force (AUMF) was a joint resolution in the wake of 9/11 that authorized the President to “use all necessary and appropriate force against those nations, organizations, or persons he determines planned, authorized, committed, or aided the terrorist attacks that occurred on September 11, 2001, or harbored such organizations or persons, in order to prevent any future acts of international terrorism against the United States by such nations, organizations or persons.” We should be clear: the problem isn’t the process of approval for drone strikes; it’s the imperialist drone strikes themselves.

Biden is a long time war hawk, supporting the war in Iraq, Zionist violence against Palestine, and generally maintaining and expanding U.S. military presence and interventions. Biden aims to increase the 2022 military budget to $715 billion, which is a 1.6 percent increase from 2021. When Biden isn’t promoting military interventions or advocating for more funds to be allocated towards defense, he maintains U.S. hegemony through “diplomatic measures”: from treaties to foreign debt that are favorable to the United States.

There is no way to “hold the Biden administration accountable” to stop bombing countries in the Global South as long as imperialist capitalism reigns supreme. Absolutely none of the bombs dropped by the U.S. are “authorized for self-defense”; this isn’t self defense, it’s part of an imperial project. The promise of lesser evilism in voting for Biden not only has not won the concessions that people in the U.S. hope for like debt forgiveness and meaningful coronavirus relief, but also perpetuates cycles of imperialist aggression, bombings, and drone strikes abroad. Ceasing imperialist wars and removing all U.S. troops are imperative to stopping the violence, in Somalia and all over the world, and would ultimately require a revolution right here in the heart of the imperial core.