Joe Biden Out of Stonewall

Democrats have not been friends or allies of the queer community historically and it is unrealistic to think that they will ever  be. 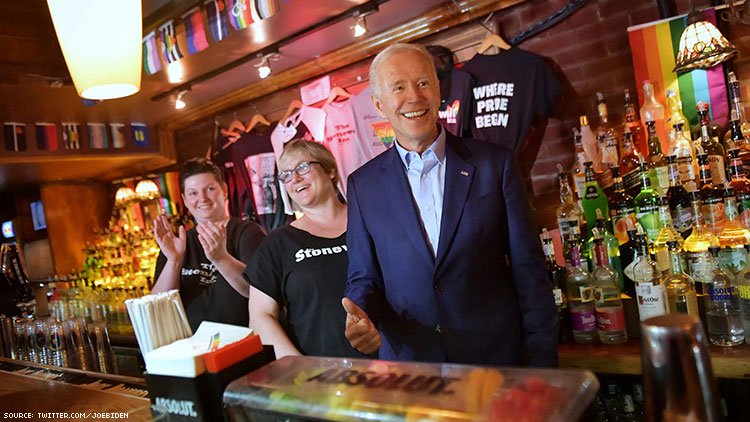 On Tuesday, June 18th presidential candidate Joe Biden paid an unannounced visit to the Stonewall Inn. He smiled, took selfies with the staff, and spoke about his support for LGBTQ+ rights. This very public visit, on the fiftieth anniversary of the Stonewall riots, seems meant to shore up Biden’s liberal bonafides and follows closely the recent apology by the NYPD police chief for the police brutality executed that night.

Biden talked  specifically about the need for workplace protections for LGBTQ+ workers and his on-going support for the struggle for same-sex civil rights. This visit was covered favorably in the press with a focus on a charming story that Biden told about seeing a queer couple with his father and his father telling him “Joey, it’s simple. They love one another.” One may wonder, however, if this story is true, sinceBiden’s voting record paints a ver different picture. Indeed, even the slightest interrogation of Biden’s previous stances on queer rights shows that he has no business being at Stonewall and that his presence there is an insult both to the brave individuals who fought the police 50 years ago and to all of those who are fighting for liberation now.

In 2012, Joe Biden—and the Democratic Party as a whole—began to rebrand as  an ally of the LGBT community. Biden even preceded Obama in publicly supporting gay marriage, causing something of a stir. But, prior to 2012, Biden was anything but  a supporter of LGBTQ+ people. Biden voted for both Don’t Ask Don’t Tell (DADT) and  the Defense of Marriage Act (DOMA), “defending” heterosexual marriage and barring LGBTQ+ people from the military. Both of these discriminatory measures were signed by then President Bill Clinton and voted for by a plurality of Democrats.  Mind you, that doesn’t mean I support the US imperialist machine that is the military, but we can’t doubt that a law actively barring LGBT people from coming out on the job furthered a homophobic and transphobic precedent. Even recently Biden has made statements that caused outrage within the queer community, most notably calling Mike Pence—a man who literally supports the torture of queer youth through ‘conversion therapy’—“a decent man.” The few times where Joe Biden actually voted for nominally pro-LGBTQ+ bills typically involved hate crime legislation which is in-keeping with Biden’s consistent belief that you can solve social problems (domestic violence, bigotry, drug abuse) with the Prison-Industrial Complex. This prison industrial complex is used as a weapon against people of color, and particularly queer people of color. In fact, Layleen Polanco (a 27 year old Afro-Latina transgender woman) died in solitary confinement in Rikers just two weeks ago.

Given that the Stonewall Uprising began with queer people fighting with the police to resist legal oppression, a man who has fought for decades to put more police on the street has no business appropriating the legacy of Stonewall.

Of course, Joe Biden is not alone in trying to wave his hands and make everyone forget about his past queerphobia. Fellow Democrats like Kamala Harris  are also going to great lengths to paint themselves as life-long allies despite their previous actions and statements. Yet, Harris was actively against surgeries for trans folks who were in prison during her term as DA and Attorney General. This issue strikes at the heart of the contradiction of the Democratic Party: they want to paint themselves as being socially progressive in order to win elections, but also want to maintain a system that has it’s bedrock in oppression and exploitation. .

As recently as the 2008,  I—and thousands of other young queer people—watched as almost every single participant in the Democratic primary debate stated in no-uncretain terms that gay marriage was a step too far. Joe Biden, Hillary Clinton, and Barack Obama were all participants in that debate and were all in agreement in opposing gay marriage. DADT and DOMA were both signed into law by a Democratic President—Bill Clinton. DOMA was passed with a majority of Democrats in congress voting in support. The complicity of Democrats in queer oppression goes so deep that the Mayor of New York at the time of the Stonewall Uprising—the man who oversaw the police that were oppressing the denizens of Stonewall—ran in the Democratic party primary for president just a few years after Stonewall.

Democrats have not been friends or allies of the queer community historically and it is unrealistic to think that they will ever  be. Historically, they have been willing to throw the rights of LGBTQ+ and other marginalized groups away if it gets them power. The best illustration of this comes from, of all people, David Axelrod—a former Obama advisor—who writes in his memoir about the 2008 campaign that Obama actively lied about his views in gay marriage. Axelrod claims that he–and others–counseled Obama to publicly reject a progressive position because it would be politically damaging, in his book, Axelrod says:

Opposition to gay marriage was particularly strong in the black church, and as [Obama] ran for higher office, he grudgingly accepted the counsel of more pragmatic folks like me, and modified his position to support civil unions rather than marriage, which he would term a “sacred union.”

This is the level of commitment that Democrats have to their socially progressive positions. We are a bargaining chip on their road to electoral power, able to be taken up or discarded as is politically expedient. This is the type of allyship that Democrats have always given and will always give: support for marginalized groups when it is politically popular and complicity in their oppression when support is no longer politically popular. Democrats are not the inheritors of the legacy of Stonewall; radicals are. Capitalists and Bourgeois political parties will appropriate radical legacies and try to play the part of allies but they never will stand for oppressed groups when the time comes. That’s why we want Joe Biden and all Democrats and Republicans out of Stonewall.