Joe Biden’s impressive performance in South Carolina indicates that the field may have narrowed to just him and Bernie Sanders. As Super Tuesday approaches, the two candidates are fighting for control over their respective wings of the Democratic Party and it is still unclear which man will become the nominee — or if Elizabeth Warren can act as a spoiler and force a contested convention. 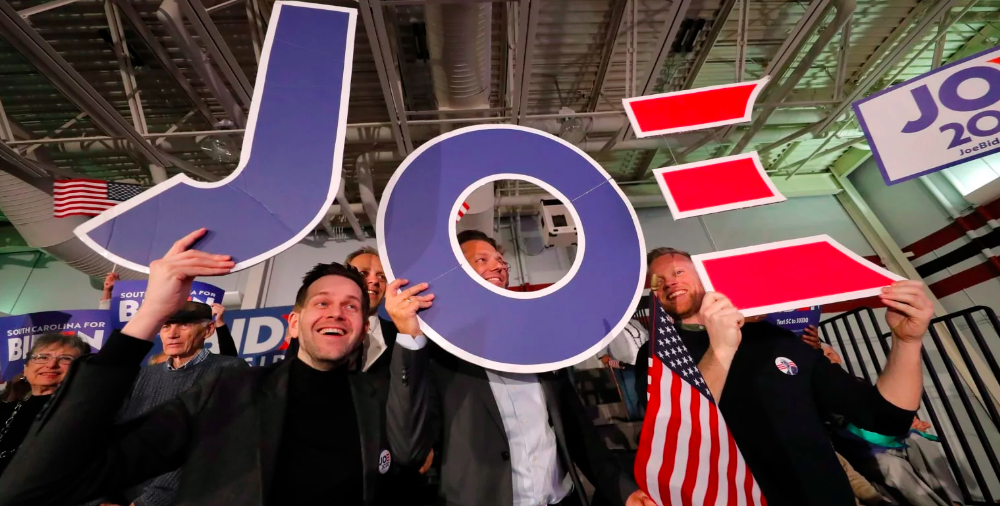 Joe Biden won the South Carolina Democratic primary by a sizable margin of votes on Saturday–carrying around 48% of the vote. While this win was not unexpected, since he had been ahead in the polls for months, the result does throw a new wrench into the works of the Bernie Sanders narrative. After Nevada, he was beginning to look inevitable. But instead, Biden demonstrates the continued pull of Barack Obama’s legacy, particularly among older Black voters, which make up most of the South Carolina Democratic Party constituency.

Prior to the South Carolina primary, the Democratic Party had been in chaos following Bernie Sanders’ knockout showing in Nevada, following strong finishes in both Iowa and New Hampshire. As the past week’s debate acknowledged, Sanders is without question the Democratic front-runner. Nevada represented the largest victory for Sanders, and it showed his strength with a racially diverse voter base. This put him in a position going into South Carolina, and to a greater extent Super Tuesday, in the “king” position. Indeed, many people have been lining up behind Sanders, including NYC Mayor Bill deBlasio and most of the American Left.

The results in Nevada sent the Democratic Party establishment into a tailspin. Would the Democratic Party nominee be a Cuba-loving social democrat, as the media has attempted to portray Sanders? The media reported that Michelle Obama was considering a Vice Presidential run. The New York Times reported that “Democratic Leaders Willing to Risk Party Damage to Stop Bernie Sanders.” And the media centered the narrative around Cuba, with The View’s Whoopi Goldberg even comparing Sanders’ comments on Cuba to Trump’s on Charlottesville.

The goal for the rest of the field was the same as it had been from the beginning: to emerge as the alternative to Sanders. However, in South Carolina, the task was more specific for Joe Biden — the once-front-runner who had been in near free-fall since the Iowa Caucus. He needed to not just win South Carolina — where he had long been leading in the polls — but show a hegemony over his wing of the party. In other words, he needed to slap away the Pete Buttigeigs, the Amy Klobuchars, and the Michael Bloombergs to be the single leader — or “uniter” as the Democratic Party establishment is so keen on finding — of the establishment wing.

It seems that Biden is well on his way to fulfilling this task with his decisive South Carolina win.  And Bernie Sanders did take a hit in South Carolina: while the polls narrowed for a while, looking like a close race between Biden and Sanders, the result was much more in Biden’s favor. Part of this might be the red-baiting of Sanders and his Cuba comments, speaking to a concern about electability. But more likely, it was the endorsements of key members of South Carolina’s Black community, particularly from influential House Democrat Jim Clyburn. Joe Biden acknowledged this in his victory speech, saying “My buddy, Jim Clyburn, you brought me back…Jim Clyburn, my friend, who lifted me and this campaign on his shoulders…”

While Super Tuesday will be the true test of how the race currently looks, it does seem that Biden has been effective in taking back the narrative and establishing himself as the only true opponent to Sanders. Buttigieg, the previous hope of the establishment, has dropped out of the race. He fell short in Nevada and got no delegates out of South Carolina.

Additionally, reports of a potential surge in support for Amy Klobuchar have been greatly exaggerated. While she did have a surprising 3rd place finish in New Hampshire, she also has gasped for life in Nevada and South Carolina. Of the candidates in the race right now, Biden hopes that he has made it clear with South Carolina that he is the only viable candidate of the establishment wing.

The one threat to Biden’s hegemony is Michael Bloomberg, who enters the race officially on Tuesday. With tremendous capital on hand and more spent already than any candidate in U.S. history, Bloomberg hopes to, in the most honest terms, buy the Democratic nomination. He has already gotten the Democratic National Committee to change debate rules to allow him in. This rule change did not really work in his favor, however. All the other candidates united to attack him on everything from his record as mayor, to his former funding of Republican candidates, to his troubling history of racism and sexism. These debates have left him bruised and vulnerable. Biden seems the most likely to benefit from Bloomberg’s weakened position, especially given that the two debates Bloomberg was in were two of Biden’s strongest performances. Additionally, Biden and Bloomberg share the same basic pitch: that they are the only candidate who can defeat Donald Trump. This narrative of electability for Biden is only strengthened by the media seizing on his performance in South Carolina.

While Bloomberg could prove to be a challenger, Bloomberg exists outside of the Democratic Party in a way that the debates have shown to be a stumbling block. For all of his money and his influence, Bloomberg isn’t a member of the club, and they were eager to remind him of that at the debates. This means that while Bloomberg — like Biden — is on the right of the party, he isn’t “establishment” in the same way that Biden is. With Buttigieg out, Biden seems to have won his hegemony over his wing over the party. The question is, will Sanders find the same? While he has been commanding a powerful lead with the left of the Democratic Party, Elizabeth Warren still has the potential to act as a spoiler.

Elizabeth Warren is in an interesting position due to the fact that, barring unforeseen circumstances, there is no path to her winning enough delegates to win the nomination. In other words, Warren’s only chance at securing the nomination is a contested convention that leads to her becoming a consensus choice. This means that her choice to remain in the race is a strategy aimed not at winning the majority of delegates, but rather to win enough to stay in, prevent either a Sanders or Biden majority, and force a contested convention. At that point, presumably, she would position herself as being the acceptable progressive candidate. She isn’t Sanders with his baggage with the Democratic Party leadership, nor is she Biden with his baggage with younger and progressive voters. And it seems that some very wealthy people want to donate to this strategy; Warren recently did an about-face on her previous position of not accepting PAC money, and her own “Persist” PAC just spent 9 million dollars on ads in Super Tuesday states, the largest ad buy by a PAC in the 2020 primary so far. And because the PAC was formed late, the Warren campaign won’t disclose who is providing these funds until they are legally forced to: in late March. With Super Tuesday, her strategy will be to pull as many delegates as possible and keep herself alive.

Since the primary election began for real with the Iowa Caucus, we have looked to each new contest as a way to clarify the race. It seems that, with each passing primary or caucus, the race shifts without clarifying. However, the back-to-back weeks of Nevada and South Carolina have shifted the race to the point of, potentially, laying out the framework for the rest of the campaign. Sanders and Biden — as the polls have been telling us from the beginning — are the two candidates to beat. One from the party’s left and one from its right. One establishment and one — at least nominally —  challenge to the establishment. What Super Tuesday will show is yet to be known, particularly in a changing economic context with the stock market dropping and the threat of the coronavirus looming. In this changing context, with Biden’s large margin of victory and Buttigieg’s exit, it is clear that Sanders faces a steeper fight for the nomination than many thought after his strong showing in Nevada.