Join Left Voice in NYC For May Day Activities

This May 1st, join Left Voice in NYC in support of Amazon Labor Union and Starbucks Workers United for International Workers’ Day. 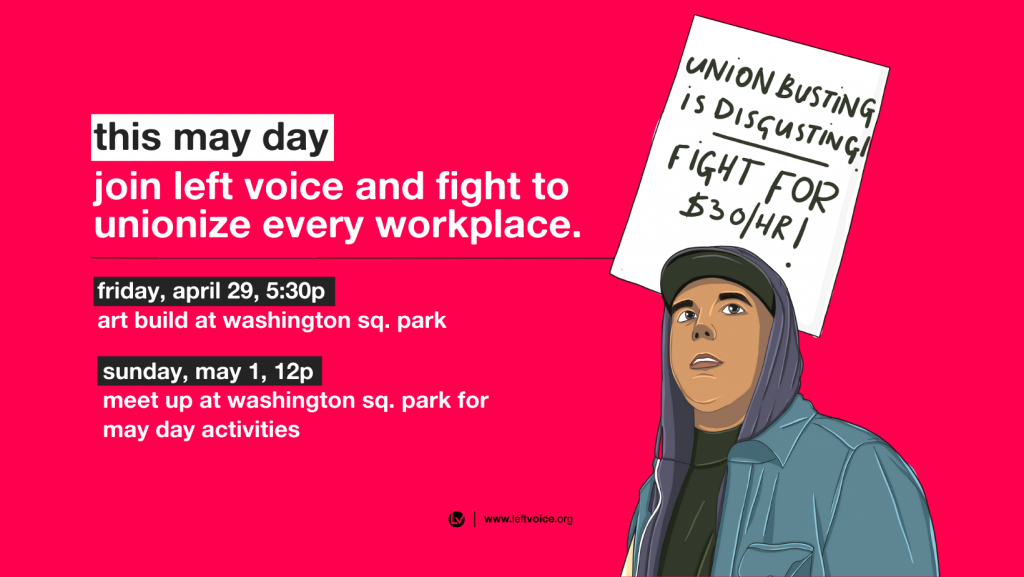 This International Workers’ Day, let’s join the Amazon Labor Union and Starbucks Workers United’s call to fight to unionize every workplace, put an end to union busting, and organize together to improve our working conditions and the world.

The pandemic showed the role we play as workers in this society. All value comes from labor. Our working conditions worsened as the bosses made record profits. We put our lives at risk, kept society functioning, and were even called “heroes.” But now, as we ask for better conditions, capitalists only offer us crumbs and treat us disposable.

We can’t make ends meet, the cost of living continues to increase, prices are soaring, and many of us are in debt. Capitalists want to unload the economic crisis onto our shoulders and keep their profits intact. It is outrageous that just one man can spend $44 billion to buy Twitter while there are so many urgent needs in our society, from housing to healthcare and more.

Workers are fed up, and fighting back. The historic victory of the Amazon Labor Union on Staten Island and the increasing union victories in Starbucks cafes across the country are a source of inspiration for millions of unorganized and precarious workers.

They didn’t only shake up the labor movement, but also the union labor leaders who are used to working with bosses and getting benefits at the expense of workers. They represent a new generation of workers, organizing from the bottom up. ALU is proposing that every board member of the union gets the same salary as an average worker — an example that should be followed in every union. They are also fighting for a wage of $30/hr. The fight for $15 already fell short years ago, and even more this year.

It is time to raise the living conditions of the working class. We are the ones who run the world and create all wealth.

This May Day, join Left Voice to support these struggles and build a fighting labor movement that is politically independent from both the Democratic and Republican parties.

Sunday, May 1, 12pm: Meet up at Washington Sq. park for May Day activities.

If you can’t make it for the rally at 12 pm on May Day, we will also be tabling at the Festival of Resistance in Maria Hernandez Park, Brooklyn from 1pm – 7pm.