Etienne Balibar, Judith Butler, and Tariq Ali, among many others, signed the statement below to denounce the state violence against protesters in Chile. 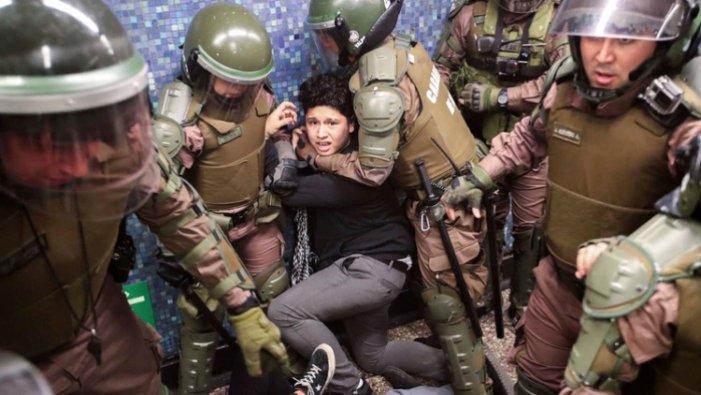 Signed by prominent intellectuals and activists, including Noam Chomsky, Silvia Federici, Ana Tijoux, Etienne Balibar, Judith Butler, Tariq Ali, Adolfo Pérez Esquivel, Chris Hedges, Vijay Prashad, and many others, this statement expresses our opposition to the violence used by the Piñera government against the Chilean protesters. We encourage you to add your name to let the workers and young people in Chile know that we stand with them.

This petition is a statement of solidarity with the people of Chile who are rising up against extreme social inequality and growing immiseration. Over the last month, protesters have taken to the streets in the largest mobilizations in the country of the past four decades. They are determined to confront the regime and its neoliberal economic model that has concentrated massive amounts of wealth in the hands of the rich while systematically dismantling social services and basic workers’ rights. The Piñera government has reacted with a violent repression. Using the most brutal measures, police and military have tried to silence the protesters and quell the unrest. Already, there have been a number of deaths, and demonstrators have been attacked with pepper spray, maimed, arrested, detained, and tortured.

Chilean President Sebastián Piñera has been intensifying his policy of repression and criminalization and is responsible for serious human rights violations. Last Thursday, November 7, he announced in a press conference that he was convening the National Security Council (COSENA), an organization created by the dictatorship. Piñera presented a plan to intensify the repression and criminalization of protesters while strengthening the state’s repressive and intelligence apparatus. On Tuesday, November 12, ahead of the massive mobilization and national strike, he announced he was sending more police onto the streets, using a security law enacted under the dictatorship to target all those who have “incited, promoted, or provoked” crimes. The goal is to increase criminalization and political persecution.

This takes place within the framework of a massive popular rebellion in Chile. The working people and youth have taken to the streets because they are weary of their terrible living conditions (salaries, pensions, education, health, transportation). They live in a country in which 26.5% of the wealth is concentrated in the hands of the richest 1% of the population, while 50% of the poorest households have barely 2.1%.

In response to the demands of protesters, on October 18 the government unleashed a brutal wave of repression and declared a state of emergency and a curfew. This has left at least 23 dead, thousands injured and arrested, hundreds being held in pretrial detention, and reports of hundreds of cases of torture by the police and the army. The number of people suffering eye injuries or even blindness because police are firing pellets indiscriminately has become an international scandal.

Despite all this, the people of Chile remain in the streets, prepared to continue their fight against a government that enjoys an approval rate of only 10%.

We, the undersigned, express our solidarity with the struggle of the Chilean people and condemn the repression by the government, the armed forces, and the police. We demand an immediate halt to this repression, full freedom to demonstrate, the release of those in custody, an end to COSENA, and trial and punishment for all those responsible—both politically and materially—for the repression. We also strongly condemn the new repressive policy announced by the government, the use of the Internal Security Law, and political persecution.