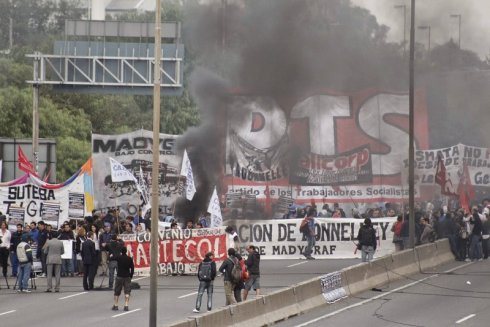 Assemblies and road blocks to ensure a successful strike

As we on the left warned, the union leaders whom called the strike are preparing just a passive act. They don’t want the working class to express itself, because their voice has the necessary power to move up the salary increase limit or to bring down the income tax, which unfairly burdens the workers. The independent organization of the workers is the only force that can put an end to the deterioration of labor conditions and precarious work.

We, the PTS, together with the Left and Workers’ Front and the fighting workers’ movement want this general strike to become an active one. For that reason we propose to carry out assemblies for debate in order to express the workers’ voice.

We also called the workers to show their strength in the streets, supporting the road blocks, a historical method of struggle of the working class, and a way to help many workers to join the strike.

In spite of the rejection from the union leaders, we on the left are demanding a plan for an ongoing fight back until we win all of our demands. The 25-day oil workers’ strike showed a way to break the ceiling on salary increases set by the government. It’s a great example for all of us.