Karina Rojas: “In This Crisis, Women Bear the Heaviest Burdens”

In a speech given at the international rally of the Trotskyist Fraction this May Day, Karina Rojas, a member of the Current of Socialist Workers (CTS) and Pan y Rosas, explains how the public health and economic crises have disproportionately affected women in Uruguay, leaving many unemployed and subject to violence by the state and at home. 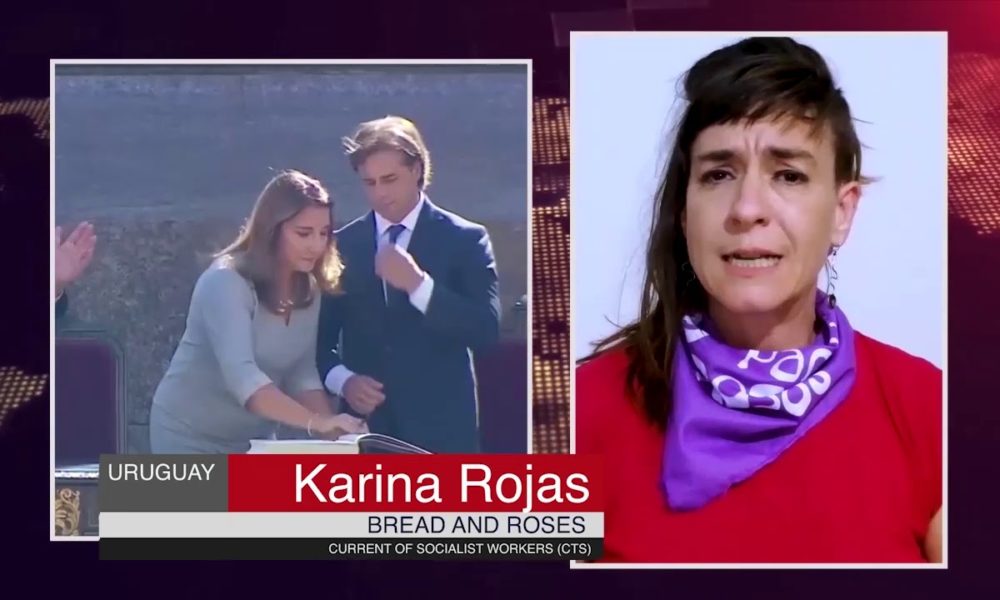 Karina Rojas is a member of the Current of Socialist Workers (CTS) in Uruguay and a leader in the socialist feminist organization Pan y Rosas (Bread and Roses).

After 15 years of a center-left government in Uruguay, the right wing has returned to the presidency. From the earliest moments of the crisis unleashed by the pandemic, the new right-wing government did not hesitate to apply tax cuts for the capitalists while sending large numbers of workers into unemployment. Much of the working class now claims unemployment insurance, but this only supplies them with half their normal salaries.  At the same time, the government increased repressive measures against the people.

There are now more than 150,000 unemployed workers, many of them women. At the same time, 30% of the workers are in precarious conditions and continue to work despite the pandemic. This includes workers at McDonalds, delivery workers, retail workers and many others.

This is the legacy left by the so-called progressive government of the Frente Amplio: increased precarity for workers, the sale of land to foreign companies, an extractive economic model, and many deep unresolved problems — including the continued impunity enjoyed by the leaders of the last military dictatorship.

In this situation, women bear the heaviest burdens, because many of us are confined at home as we struggle to feed our families, and many of us are subject to gender violence.

That’s why, more than ever, the working class has to build its organizations of struggle. Our very lives are at stake! We reject the discourse of national unity, which calls for us to “come together” during this crisis. We workers are already paying for the crisis with unemployment, hunger, and misery. We have to find our own solutions and ensure that it is the capitalists who pay for this crisis.

We struggle every day to build a political force for the working class, women, and youth — an anti-capitalist Left that puts forward a workers’ and socialist program for Uruguay, in solidarity with all oppressed people.

On this May Day, we remember again the martyrs of the working class and we strive to follow their legacy of struggle.

Comrades, we send you greetings from Uruguay to the Internationalist Rally. And as we say here in Uruguay: Long live those who fight!