Cinco de Mayo is commonly associated with drinking, sombreros and many other Mexican stereotypes. It is actually a holiday celebrating the defeat of a French army by the Mexicans. Karl Marx, who’s birthday is May 5th, denounced the French invasion and sided with the Mexican people. 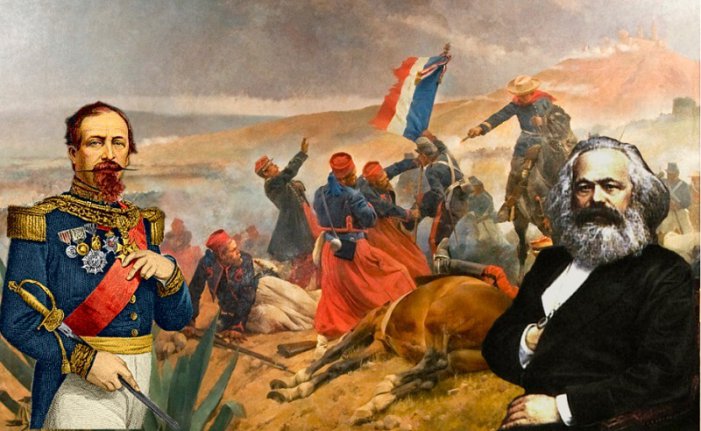 Mexico’s history during the 19th century was turbulent. A young country that had recently gained its independence, Mexico had to deal with both a vast territory and the unresolved question of which form of government to establish. After a brief period of monarchy, headed by Agustín de Iturbide, in the first half of the 19th century, Mexico had several coups d’etat and republican administrations that shifted between centralist (conservative) and federalist (liberal) forms of government.

After the defeat of Antonio López de Santa Anna in the US-Mexico war, the so-called Ayutla Revolution put younger politicians in power with demands for liberal reforms, including the separation of church and state as well as land reform.

The liberals’ victory in 1857 brought a new constitution that legalised the Reform laws. These laws represented first steps towards the establishment of capitalism in Mexico. However, the Conservative Party still had relatively wide support among the population. Tensions came to a breaking point as president Ignacio Comonfort carried out a self-coup and did not recognise the 1857 Constitution, reigniting the civil war. This marked the beginning of the Reform War (1858-1861)

The liberal victory in this war forced the conservatives—including many staunch monarchists—to contact the European monarchs in search of political and material aid to restore their power.

Meanwhile, Benito Juárez—who became president after Comonfort’s coup—was cornered in a tough financial situation and declared the suspension of payments of the foreign debt.

Spain, Britain and France sent troops to demand that the Mexican government immediately resume repayment of the debt. Negotiations ensued and British and Spanish troops eventually withdrew. France, however, kept its soldiers in Mexican territory. France’s second intervention in Mexico had begun.

Napoleon III: from Tragedy to Farce

Hegel remarks somewhere that all great world-historic facts and personages appear, so to speak, twice. He forgot to add: the first time as tragedy, the second time as farce.

This is how Marx described the coup d’etat of Louis Bonaparte in France in 1852. In his famous work The 18th Brumaire of Louis Bonaparte, Marx drew numerous parallels between Napoleon’s original coup and the “farce” carried out by his nephew five decades later, attempting to rebuild the old French Empire that the Congress of Vienna had dismantled.

Louis Bonaparte, renamed Napoleon III, entered into discussions with the Mexican conservatives and saw an opportunity to win an ally against the growing hegemony of the United States on the American double continent. Thus, he sent Maximilian von Hapsburg to establish a puppet government for Mexico.

At the time Marx was working as a journalist and correspondent of the New York Tribune. In its pages he denounced the intervention:

The contemplated intervention in Mexico by England, France, and Spain, is, in my opinion, one of the most monstrous enterprises ever chronicled in the annals of international history. […] But, nevertheless, it is certain that the French plan was far from being matured, and that both France and Spain strove hard against a joint expedition to Mexico under English leadership.

Marx condemned the joint intervention, while at the same time apparently distancing himself from his early stance in 1848 (when he favoured the U.S. invasion of Mexico) since he now criticized how the independence of Texas was used to expand slavery.

The Battle of Puebla and the French Retreat

On May 5, 1862, Mexican troops under General Ignacio Zaragoza defended the city of Puebla from the French. Fighting alongside indigenous people from the Pueblan sierra and the villages of Xochiapulco, Tetela and Zacapoaxtla, armed with machetes, they managed to defeat the French zouaves of General Latrille de Lorencez.

Marx’s last article in the New York Tribune, coincidentally enough, refers to Mexico. Published in 1862, Marx once again denounced the joint intervention and accused the British government of taking advantage of weaker nations.

The Blue Book on the intervention in Mexico, just published, contains the most damning exposure of modern English diplomacy with all its hypocritical cant, ferocity against the weak, crawling before the strong, and utter disregard of international law. […] [Count] Flahaut broaches to [Lord John Russel] the ill-omened news that his master considered it necessary “to send an additional force to Mexico,” that Spain by her precipitate initiative had spoiled the mess; that “the allies must now advance to the interior of Mexico, and that not only the forces agreed upon would now prove insufficient for the operation, but that the operation itself would assume a character in regard to which Louis Bonaparte could not allow the French forces to be in a position of inferiority to those of Spain, or run the risk of being compromised.” […] The Allied forces are not to preclude the Mexicans from their right “of choosing their own Government,” thus intimating that there exists “no Government” in Mexico; but that, on the contrary, not only new governors, but even “a new form of Government,” must so be chosen by the Mexicans under the auspices of the Allied invaders. Their “constituting a new Government” would “delight” the British Government; but, of course, the military forces of the invaders must not falsify the general suffrage which they intend calling the Mexicans to for the installation of a new Government. […] The second part of the farce Russell had to play was the putting on the lapis of the Archduke Maximilian of Austria as the Mexican King held in petto by England and France.

Finally, his last letter precluding the Mexican war dates from April 28, 1862, just a week before Puebla was to be assaulted by the zouaves of Count Latrille de Lorencez. Published in Die Presse, Marx points out the farçe of the Mexican debt.

A MAJOR theme of diplomatic circles here is France’s appearance on the Mexican scene. It is found puzzling that Louis Bonaparte should have increased the expeditionary troops at the moment when he promised to reduce them, and that he should want to go forward whilst England draws back. It is known here very well that the impulse for the Mexican expedition came from the Cabinet of St. James and not from that of the Tuileries. It is equally well known that Louis Bonaparte likes to carry out all his undertakings, but particularly the overseas adventures, under England’s ægis. […] Under the Catholic administration of Zuloaga and Miramon, an issue of Mexican state bonds to the amount of $14,000,000 was contracted per medium of the Swiss banking house of J. B. Jecker and Co. The whole sum that was realized by the first issue of these bonds came to only 5 per cent of the nominal amount or to $700,000. […] Miramon contracted this debt at a time when he was in possession of the capital city. Later, after he had come down to the rôle of a mere guerrilla leader, he again caused state bonds to the nominal value of $38,000,000 to be issued through his so-called Finance Minister, Señor Peza-y-Peza. […] This debt, then, of $52,000,000, of which not even $1,200,000 have hitherto been advanced, the administration of President Juarez declines to recognize, on the one hand, because it knows nothing about it and, on the other hand, because Messrs. Miramon, Zuloaga and Peza-y-Peza were possessed of no constitutional authority to contract such a state debt. The above mentioned “prominent” Frenchmen, however, had to carry the contrary view at the decisive place.

Although the war between France and Mexico—known in Mexico as “the Second French Intervention” (the first being the so-called “Pastry War” of 1838)—did not end until 1867, the heroism of the Mexicans, who resorted to guerrilla warfare, was able to defeat Maximilian’s puppet empire. Simultaneously, the growing presence of Prussia on the European and international stage pressured Napoleon III to withdraw his armies and in preparation for war against the Germans.

The end result of that war, the Franco-Prussian War of 1870-71, was the first working-class government of history: the Paris Commune. The preface for this was Napoleon III’s failed adventure in America, defeated by the heroism of the Mexican people. This did not escape the keen eye of Karl Marx.