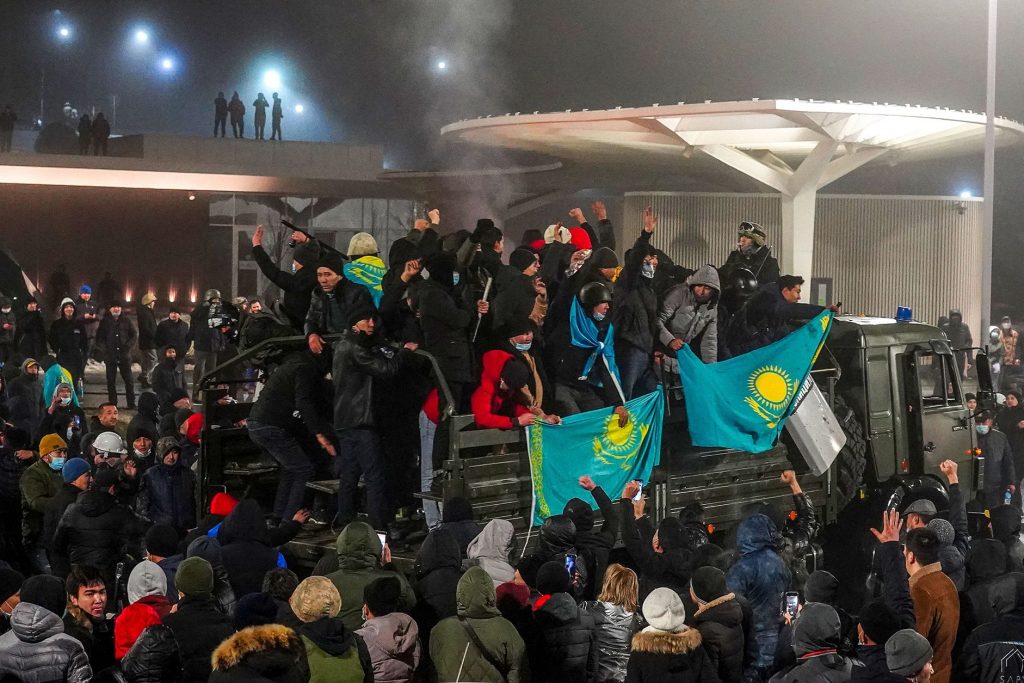 The rise in fuel prices was only the spark that ignited the massive social upheaval. The fact that it all began with an exponential increase in gas prices (after the subsidies and price controls put in place a few years earlier were lifted) is a clear indication of profound discontent, which seems to have been burgeoning beneath the surface for years, even decades. In response to protests that began in a western region rich in gas and oil resources, and which quickly spread throughout the country, the president of Kazakhstan, Kassim-Jomart Tokayev, attempted to pacify the protesters by making certain concessions. The entire government resigned, the increase in gas prices was “suspended” and price controls were temporarily restored. Tokayev even removed Nursultan Nazarbayev, the man who ruled the country from 1990 to 2019, from his post on the Security Council, where he continued to wield power. Nevertheless, the protests continued.

The drastic measures taken by President Tokayev clearly indicated that the government’s situation was dire. Several official buildings were taken over and in some cases buildings were set on fire, notably in Almaty, the country’s economic capital. Protesters seized the city’s airport for several hours before being evicted by police forces. In a town near Almaty, a statue of Nazarbayev was torn down.

The government was quick to launch a crackdown in response. For five days, the country was plunged into an Internet blackout and even landline telephone communications were obstructed. There were violent clashes between the security forces and the demonstrators, leaving several dead and injured on both sides. In this context, the president launched an appeal for help from the Collective Security Treaty Organization (CSTO) made up of several former Soviet republics, including Russia. In response, troops from Russia and other countries immediately landed in Kazakhstan, tasked with protecting the country’s infrastructure, clearing the way for the crackdown on protesters by local security forces.

However, some analysts believe that the call for the intervention of CSTO forces was in part motivated by the authorities’ lack of confidence in the loyalty of certain sectors of the country’s armed forces. According to official figures, more than 160 protesters were killed and more than 2000 injured, although the actual figure is undoubtedly much higher. On the side of the police forces, at least 18 were and 750 injured. More than 12000 arrests have been made.

It is too early to say what the consequences of this revolt will be. Different hypotheses on the motivations of the uprising have flooded the media, including theories of a Western conspiracy and an internal struggle between factions of the oligarchy. But beyond the analyses of who will benefit from this situation, one thing seems to be clear: the movement reflects the frustrations and deep grievances experienced by the people of Kazakhstan in the past few decades known as the “transition” — the period since the fall of the Soviet Union in the early 1990s.

A Revolt against the “Transitional” Capitalist Regime

According to Aynur Kurmanov of the Socialist Movement of Kazakhstan:

The workers of Zhanaozen were the first to rise. An increase in the gas price served only as a trigger for the popular protests. After all, the mountain of social problems has been accumulating for years. Last fall, Kazakhstan was hit by a wave of inflation. It should be taken into account that products are imported to the Mangistau region and they have always been 2-3 times more expensive there. But on a wave of rising prices at the end of 2021, the cost of food rose even more, and substantially. We must also take into account that the West of the country is a region of solid unemployment. In the course of neoliberal reforms and privatization, most of the businesses there were shut down. The only sector that still works here are the oil producers. But for the most part, they are owned by foreign capital. Up to 70 percent of Kazakhstan oil is exported to western markets, most of the profits also go to foreign owners.

A protester interviewed by The Guardian also highlighted the reasons for the protests, reasons that go beyond the increase in gas prices, including corruption, nepotism, and social inequality. “Nazarbayev and his family have monopolized all sectors, from banking to roads to gas. These protests are about corruption … It all started with the increase in gas prices but the real cause of the protests is poor living conditions, high prices, joblessness, corruption,” he explained.

In many respects Kazakhstan is a case study of “countries in transition” from the Soviet Union. In these countries, capitalism and “stability” were restored by deeply corrupted dictatorial regimes, emerging directly from the Stalinist bureaucracy of the Communist Party in the USSR. It is perhaps one of the countries where the transformation of bureaucrats into a new bourgeoisie has been most apparent. The president of Kazakhstan throughout this period of capitalist restoration, Nursultan Nazarbayev, was Prime Minister of Kazakhstan from 1984 and later became First Secretary of the Communist Party of Kazakhstan in the late 1980s. After the fall of the USSR he not only became the country’s “strongman” but his family became one of the wealthiest in Kazakhstan, in a country with an average salary of just $7,000 a year. It should also be noted that Nazarbayev’s regime perpetuated the arrogance and cult of personality that was typical of the Stalinist era. For example, the former capital of the country, Astana, was renamed “Nur-Sultan,” which is Nazarbayev’s first name.

In this context, it is unsurprising that the people’s hatred has also been directed towards Nazarbayev himself, with protesters chanting several slogans against the former president, who has remained highly influential in the country’s politics. But by directing their attacks against the former president, what the young people and workers of Kazakhstan are widely protesting is the entire regime, this “transitional” capitalism that is nothing more than a model of capitalism dependent on hydrocarbon exports, which has been very hard on the country’s exploited classes but very favorable to big business and multinationals.

While on the surface it may seem that Kazakhstan is one of the countries in Russia’s “area of influence,” the reality is much more complex. The country has certainly remained a privileged partner of Russia throughout all these years, but its government has always worked to maintain good relations with China and Western imperialist powers. This has also been a way of counterbalancing Russian influence.

This proximity to Western capital is described in a laudatory article that appeared in Forbes last July, according to which:

Western companies, led by big U.S. names, started investing initially in the oil and gas sector and eventually across the board in many industries. They range from GE, which has interests in the railroads and alternative energy, to the engineering giant Fluor, to consumer goods companies such as PepsiCo and Procter & Gamble. The total foreign direct investment stood at $161 billion in 2020, with $30 billion coming from the United States.

Kazakhstan is indeed a very important country at the regional level, but also internationally. This is why the situation is being followed very closely by Moscow and Western capitals. As Emma Ashford from the pro-imperialist think-tank Atlantic Council has noted:

Kazakhstan is … surprisingly important to the economies of states in Europe and—to a lesser extent—Asia, as that political stability has enabled it to become a major exporter of oil, natural gas, and coal. Kazakhstan is also an important energy transit country for its neighboring resource-rich Central Asian states. The protests have already reached workers at the Tengiz oil field, though production has not yet been affected. If these protests become significant enough to disrupt energy production or transit, they could have knock-on economic effects disproportionate to Kazakhstan’s political importance.

Finally, the recent events in Kazakhstan are of special importance to Russia. The Central Asian country is essential to Russia’s defense strategy. Its destabilization is undoubtedly a source of concern for Russian authorities, who dedicate a large part of their energy to preserving an entire network of countries that will protect Russia from any possible attack. This is all the more important considering that Moscow is currently in the midst of a very tense situation with Ukraine and Western powers at its Western border. The crisis in Kazakhstan took both Russian analysts and Western analysts by surprise. For Moscow, it is certainly an unwelcome development. It is no wonder that pro-Russian newspapers have decried a Western “conspiracy,” without providing any evidence, of course. But the reality is that Putin and his regime are deeply counterrevolutionary and are opposed to any direct action by the masses, a “survival instinct” undoubtedly learned in the school of the Stalinist KGB in which Vladimir Putin was trained.

In a world of increasingly fierce and direct confrontations between world powers and constant friction and threats of inter-state conflicts, large-scale class conflicts, which sometimes seem to be absent from the ruling classes’ calculations, will become more prevalent. It is unclear how the situation in Kazakhstan will develop. Perhaps the regime will manage to save itself through violent repression with the aid of its allies and by directing the protests towards other channels. But this is a warning. Not only for the Kazakh leadership but for a whole series of authoritarian regimes in the region and around the world. And in the period ahead, the working class and class struggle will be increasingly present.

Originally published in French on January 6, 2022 in Revolutión Permanente.