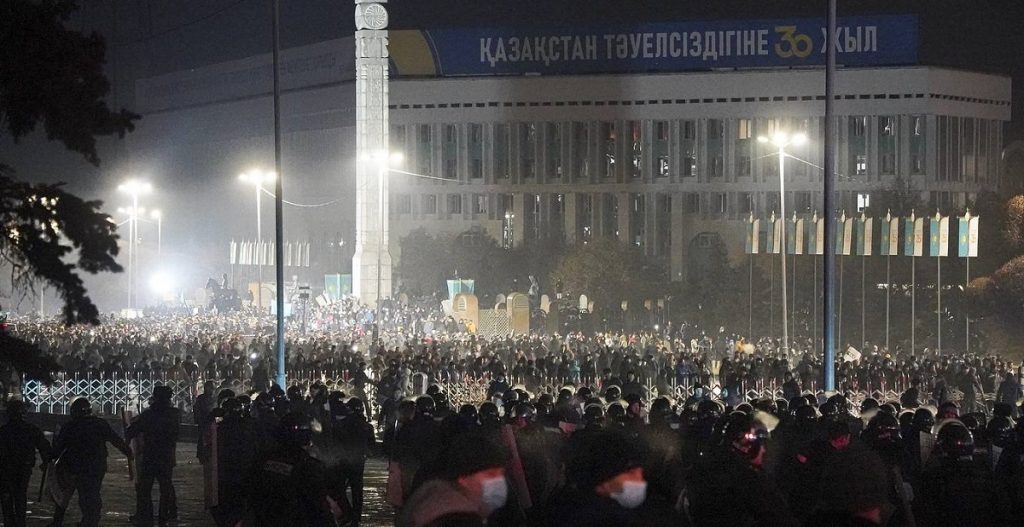 Kazakhstan’s President Kassym-Jomart Tokayev tried to placate protesters demonstrating in different parts of the country against the rising price of liquefied petroleum gas (LPG) while declaring a state of emergency in two protest hotspots.

“Dear compatriots, I urge you to show prudence and not succumb to provocations from within and from without, to the euphoria of rallies and permissiveness,” said Tokayev in a televised speech after the third day of protests.

The president accepted his government’s resignation on Tuesday under Article 70 of the nation’s constitution, as reported on the official website. The members of the dissolved government will remain in their posts until a new cabinet is formed. Alikhan Smailov has been appointed the acting prime minister.

Earlier in the day, an executive order had been published on the presidential website establishing a state of emergency in Almaty, the former capital of Kazakhstan and the country’s largest city, and in the western region of Mangystau, where the protests started at the beginning of the year.

Images of the police crackdown on demonstrations began to circulate on social media. More than 200 people have been detained and 95 police officers injured since the start of protests.

The government promised to lower fuel prices, which had increased on January 1, but this announcement has not had an impact on the size of the protests.

This was Tokayev’s second message during the day aimed at appeasing Kazakhstani protesters, who began to take to the streets on January 2.

Just hours before, the Kazakhstani leader asked the population “not to be influenced” by calls from people who wanted to “destroy the stability” of Central Asia’s largest country and “divide” the people, while promising to consider the economic and social demands made by the protesters.

The demonstrations have involved thousands of people and have spread to other cities, as well as to a workers’ camp used by subcontractors of Kazakhstan’s largest oil producer, Tengizchevroil.

The protesters are demanding a 50 percent reduction in LPG prices from the increased price of 120 tenge (US$0.27) per liter, which has exacerbated the economic crisis sparked by the pandemic. Retailers have agreed to lower prices, but only by 25 percent.

The city of Zhanaozen was the scene of the largest protests in the country since the collapse of the Soviet Union in 1991, when at least 14 striking oil workers were killed in 2011 by police during a protest over wages and working conditions.

Tokayev took office in 2019, after being personally chosen as successor by the country’s “founding leader,” Nursultan Nazarbayev.

Nazarbayev, 81, who has ruled Kazakhstan since 1989, retains control of the country as president of the Security Council of Kazakhstan and “leader of the nation,” a title that grants him unique policy-making privileges as well as immunity from prosecution.

This absolute political control, including over the Parliament, which lacks any opposition, along with the constant persecution and repression of political dissidents, has made public protests in the country rare. Although demonstrations are considered illegal unless notice is provided in advance, the protests have been carried out spontaneously for the past three days. Kazakhstanis have taken to the streets to make their voices heard, amid a social and economic crisis exacerbated by the recent increases in fuel and commodity prices, while the International Monetary Fund continues to demand tax hikes, including VAT increases, which would have a disproportionate effect on lower-income sectors.

Originally published in Spanish on January 5, 2022 in La Izquierda Diario.