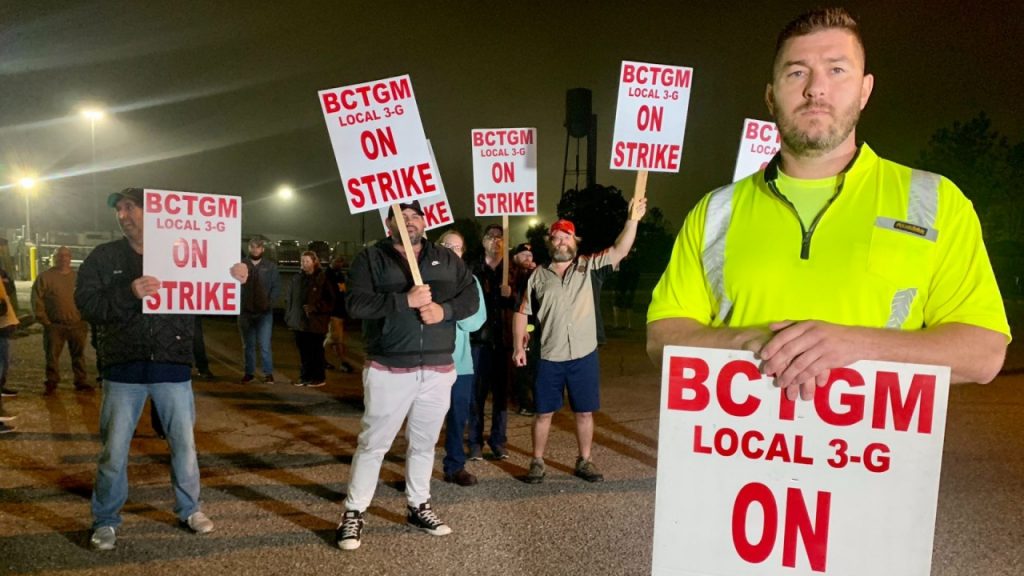 For the first time in 50 years, workers for the Kellogg Company are on strike. Since October 5, Kellogg Workers have been on the picket line around the clock outside the company’s flagship plant in Battle Creek, the headquarters city of the multinational breakfast foods manufacturer.

On Saturday evening, October 23, members of the Left Voice Detroit Working Group joined the picket line in a show of solidarity with the labor movement and the ongoing #Striketober. We marched with factory workers, members of Local 3-G of the Bakery, Confectionery, Tobacco Workers and Grain Milers International Union (BTCGM), who were holding a wide variety of signs, including: “Shame on Kellogg’s for using scabs”; “Our futures are not for sale”; and “People over profits.”

As one worker told us, “I helped make billions in profit for Kellogg’s. Now what?”

Andy Maturen, a senior factory employee, spoke with Left Voice and said, “This fight is not about us. It’s about not selling out future generations; not selling them short.” He explained that under the company’s two-tier system, nearly a third of the workforce are “transitional,” or bottom-tier workers, at the Battle Creek facility — which produces the popular Raisin Bran, Raisin Bran Crunch, and Special K cereals. These workers, who often have a slow, arduous path to top-tier employee status, receive no pension, lesser healthcare benefits, and lower wages than their senior counterparts.

The union’s strategy, as one worker put it, is to “stay out one day longer than Kellogg’s.” But the company’s use of scab labor could prevent that. While the plant, which is being operated by middle-management and scab labor, is not producing any cereal right now, that won’t likely last: management could, eventually,  train scabs to do the jobs of striking union workers. That scenario seems likely; otherwise, why would the company go through the effort of hiring them?

Kellogg’s is also trucking cereal from its facility in Querétaro City, Mexico, to the Battle Creek plant to sell in the United States. The union, said, Maturen, ought to “organize in Mexico and across borders,” correctly pointing to the need for the working class to unite internationally.

Strikes have the most leverage when workers can halt production completely. When scabs aren’t prevented from entering plants, that power is practically eliminated. Of course, scab workers are being exploited too — something the strikers on the picket line understand, as one Kellogg’s worker made sure to emphasize. Some workers emphasized how dangerous the job can be for inexperienced people not properly trained to operate heavy machinery at the facility.

Unfortunately, Kellogg’s greed motivates the company to exploit scabs workers and put them in harm’s way. It’s the same greed that motivates mandatory overtime and paying bottom-tier unionized workers less to do the same work as upper-tier workers.

Even with these general expressions of “solidarity” with the scabs, though, workers need a strategy to keep them out of the work site if they are going to shut down production entirely. In fact, strong picket lines that challenge scab labor from entering work sites have been known to provide opportunities  for union workers to engage with scab workers and even get them to join in the fight against their common enemy, the exploiting bosses.

Workers know that it’s wrong and unfair for them to be forced to work long hours and face possible reductions in benefits while Kellogg’s is reaping billions in profits. Maturen pointed out that during the pandemic, cereal sales rose 11 percent. Rather than paying the CEO $11 million a year plus a multimillion dollar bonus, Kellogg’s should be providing all workers with good pay and benefits and a respectful, safe environment in which to work.

To win their just demands, taking ownership of the strike — enthusiastically — will be essential. Union officials cannot always be relied upon to provide all the answers. There is a lot of pressure from management on union officials to make a deal; rank-and-file workers need to be a counterforce to ensure that any deal is one that benefits them, regardless of whether it cuts into the profits of the greedy bosses.

This is a lesson from labor history, in which rank-and-file action has, time and again shown the way forward to win from the bosses what union leaders have been reluctant to fight for tooth and nail. In New York City from 1965 to 1975, rank-and-file transit workers went beyond their union leaderships, rejecting concessionary contracts and confronting the bosses directly. City workers in Detroit in 1986 rebelled against an agreement union leaders struck with then-mayor Coleman Young; they stayed out and won more, despite Young’s claim that there was no more to give. More recently, IATSE rank-and-file members are organizing to go around a contract the union leadership is proposing that gains almost none of what the unionists demanded in threatening a strike.

Rank-and-file workers need to adopt bold tactics to shut down production and find creative, compelling ways to garner active solidarity from other unions, progressive organizations, and broader sectors within communities — locally and across the country — who support the fight of labor.

The Kellogg Company is determined to continue its unfair treatment of workers — exploiting labor earns huge profits! Forcing the company to do right by these workers will require not only union strength but also solidarity from others. You can show your solidarity in two ways. One way is to join the picket line in Battle Creek, which is operational 24/7. Be sure to bring food, snacks, and other essential items workers may need to help alleviate the burdens of being on strike. The other way to support workers is to donate to the local strike fund, which you can do here.