After nine weeks on strike, workers at four Kellogg plants have rejected a temporary agreement that doesn’t meet their demands. They’ll continue to fight the bosses — and need the entire U.S. labor movement to join their struggle. 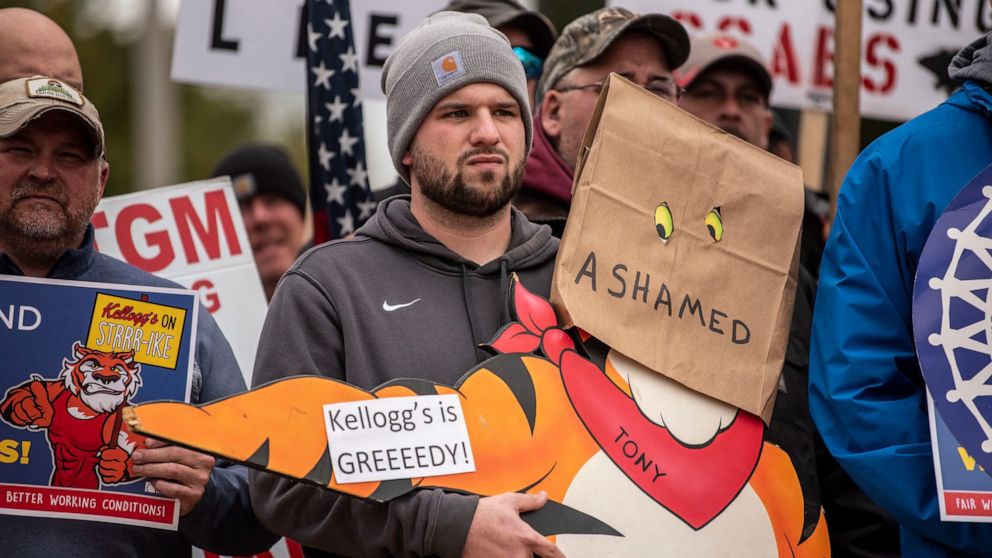 The strike that began at four Kellogg Company plants on October 5 will continue. This morning, the 1,400 striking workers rejected a tentative agreement (TA) that had been negotiated by their union, the Bakery, Confectionery, Tobacco, and Grain Milling Workers International Union. The strike had encompassed workers at plants in Omaha, Nebraska, Lancaster, Pennsylvania, Memphis, Tennessee, and the company’s flagship facility in Battle Creek, Michigan.

That walkout had come after years of collective bargaining that had failed to secure a new contract, and was focused on the bosses’ aim to cut healthcare benefits, holiday pay, and vacation time, as well as eliminate jobs by moving them out of the United States. But it was Kellogg’s two-tier compensation structure that was at the center.

The TA was for a five-year contract that failed to resolve the two-tier structure that had been agreed to in 2015, in which newer employees were paid less and received less generous benefits than workers with greater seniority. The old contract had as many as 30 percent of Kellogg workers in the lower tier, doing the same work as everyone else but bring home much less pay.

According to the company, the TA set out an “accelerated, defined path for transitional employees to legacy wages and benefits,” fancy words for moving current employees in the lower-tier employees to the higher tier if they have four years on the job, and then moving the rest over the life of the contract (some 3 percent of a plant’s head count each year). The TA also gave a 3 percent wage increase to “veteran workers” in the contract’s first year, and then cost-of-living adjustments in subsequent years.

The rank and file weren’t having it. “The tentative agreement was overwhelmingly rejected by the union body,” Dan Osborn, president of the union’s local in Omaha, told Bloomberg.

Kellogg announced immediately that it was going to expand its use of scabs in response to the vote. As the New York Times reports, the company issued a statement, declaring, “The prolonged work stoppage has left us no choice but to hire permanent replacement employees in positions vacated by striking workers.”

Rank-and-file union members knew this would happen, but voted to keep fighting. After years of 16-hour shifts, forced overtime, and the uneven pay of the two-tier structure, and after nine weeks on the picket lines, they are sending a clear message to the bosses: give us what we demand.

It’s time for the entire U.S. labor movement to get behind this strike and mobilize to shut down Kellogg production. Keep the scabs out!