Abortion is now effectively illegal in Kentucky, with the state enacting the country’s harshest restrictions so far. We need a mass movement to fight for safe, legal, and free abortion, on demand. 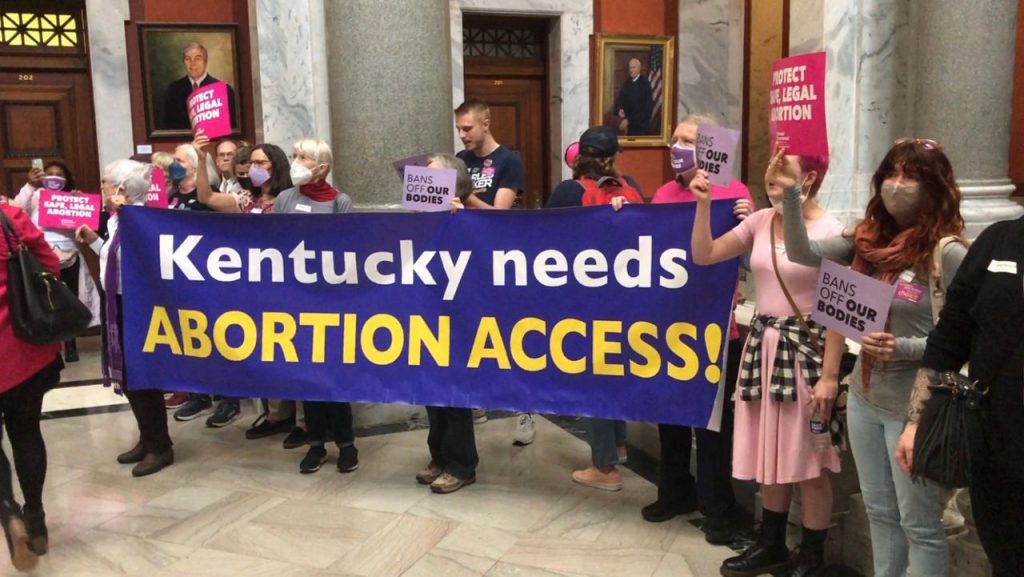 On Wednesday, Kentucky lawmakers essentially banned abortion. Effective immediately, abortions after 15 weeks of pregnancy are illegal, except in medical emergencies, with no exceptions for rape or incest.

While abortions before 15 weeks technically remain legal, other provisions in the legislation will make it virtually impossible for doctors to perform the procedure. For example, providers must comply with onerous and invasive reporting requirements about the pregnant person’s past pregnancies and sexually transmitted infections. Providers also need to maintain admitting privileges at local hospitals — an enormous barrier, given that hospitals can deny such privileges at their discretion. Providers who want to prescribe medication abortions, which account for more than half of all abortions in the state, must now also register with the state, but since Kentucky lacks this kind of registration system, they have no way of performing the procedure.

Democratic governor Andy Beshearvetoed the bill, arguing that it would be unconstitutional and criticizing the fact that no exceptions were made in cases of rape or incest. but the Republican-controlled state legislature overrode his decision.

Like abortion restrictions in other states and across the world, Kentucky’s laws won’t affect all residents equally. Whereas wealthy Kentuckians will be able to travel to another state to get the procedure, poor, working-class people — particularly people of color — will lose access to safe abortions. They will either risk their lives seeking unsafe, illegal abortions, or they will be forced to give birth.

Kentucky Is Following other States’ Lead

While the Kentucky law is the strictest anti-abortion legislation so far in the United States, it’s by no means the first of its kind. In Florida, Governor Ron DeSantis signed a similar law last Thursday banning most abortions after 15 weeks of pregnancy. Mississippi has also recently instated a similar ban, containing exceptions only for cases where an abortion is necessary to save a mother’s life, prevent serious injury, or if the fetus has a fatal abnormality. Last Tuesday, Governor Kevin Stitt of Oklahoma signed a law making performing an abortion a felony punishable up to ten years in prison. This bill came after many Texans came to the state seeking abortion care after Texas enacted some of the most comprehensive and stringent abortion restrictions to go into effect since Roe v. Wade.

All told, Kentucky’s abortion ban is one of a deluge of bans introduced in over 30 states this year, with bans having passed at least one legislative chamber in seven states.

Even more states are now considering instituting similar bans. At least 20 states have trigger bans, which means that they are poised to immediately make abortion completely illegal if Roe v. Wade is overturned — a real possibility as nine unelected judges weigh taking away our reproductive rights.

If Roe v. Wade is overturned, the average person seeking an abortion in America could have to travel around 125 miles to reach the nearest provider, compared to the current average of 25 miles, according to the Myers Abortion Facility Database. Reproductive rights have been gradually eroded over several decades, and will continue to be stripped without a mobilized movement to fight back.

Democrats Won’t Save Us — but a Mass Movement Will

Reactionary attacks on reproductive rights — as well as attacks on LGBTQ+ people, workers, and voting rights — are coming from the Republican Party. The Party allies with right-wing groups and religious groups to enact draconian, patriarchal laws that disproportionately harm the working class and people of color.

But Democrats could pass legislation to enshrine legal, free, and safe abortion, and they’re choosing not to. Despite super-majorities during President Obama’s first term and a current majority under President Biden, Democrats have never stopped Republicans from gradually chipping away at reproductive rights. In fact, abortion clinics closed at a record pace during the Obama presidency.

Instead, Democrats are trying to channel this anger to the ballot box, as usual. They decry Republicans’ reactionary tactics and the Supreme Court’s right-wing decisions, but the last thing the Party wants — including its non-profit allies — is a big movement that will rock the boat and question the system, like in the summer of 2020. This could make President Biden’s poll numbers fall even further and imperil their electoral hopes for the 2022 midterms. For the Democrats, reproductive rights — like LGBTQ+ rights, and workers’ rights — are pawns to scare people into voting blue, no matter who.

Believing that Democrats stand for abortion rights — and that abortion pills and donations are the answer — is demobilizing and dangerous. To enshrine our reproductive rights, we need a mass movement for legal, free, and accessible abortion on demand, and we need it now. Unions have an important role to play in this fight, and should use their powerful leverage. In addition to strikes and work stoppages to wrest concessions in reproductive rights, unions should reach across sectors to build working-class coalitions with real power. After all, abortion rights are a labor issue.

Several other countries have shown how these rights can be won and preserved. In Argentina and Ireland, activists engaged in persistent, collective action. Across both countries, combative groups organized walkouts and massive marches.

These inspiring examples show that our rights aren’t gained through systems like the U.S. Supreme Court or legislators — in fact, these bodies are more often than not impediments to social change. Rather, demonstrating our power in the streets, organizing strike actions, and shutting down business as usual will achieve these critical victories.

The streets are empty right now — but they don’t have to be. We have the power to win.