The LA teacher strike won important gains, with massive protests in the rain and pickets at the majority of schools. However, some teachers have mixed feeling about the process of approving the contract, as well as about the contract itself. 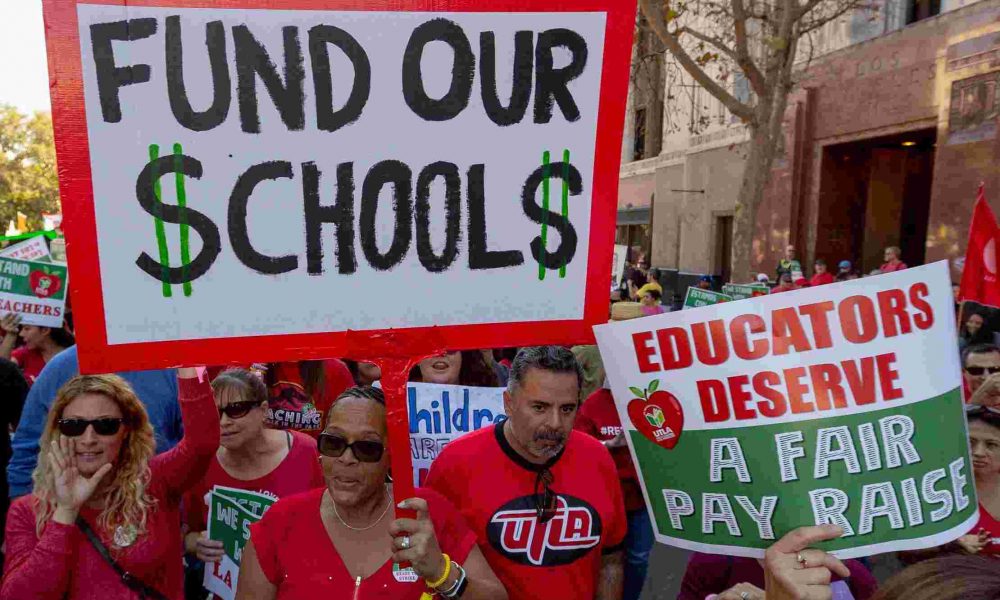 After more than a week of marches and massive rallies that gained national attention and drew calls of solidarity from across the world, the United Teachers of Los Angeles (UTLA) have ended their six day strike and settled on a contract that their leadership claims is a historic victory.

Although the new contract includes retroactive pay increases for the more than 30,000 teachers in the district, the strikes, which began on January 14, were never really about wages. Many of the most popular demands were those specifically intended to improve the lives of students, including: smaller class sizes, better nurse-to-student ratios, more counselors, and greater restrictions on the expansion of charter schools.

The January 22 announcement of a tentative agreement was greeted by many union members with elation and relief and Facebook and Twitter exploded with images of celebrating teachers, happy to finally get back to their classrooms.

Teachers at Sunrise Elementary in Boyle Heights playing Queen’s “We Are the Champions” on sound system and singing along l in front of school. #UTLAStrike

There were important gains made by this strike: a 3 percent raise for the 2017-2018 year and a 6 percent raise retroactive to the beginning of this school year. Section 1.5, which allowed the district to ignore class size caps, was taken out of the contract, providing a footing to negotiate even smaller class sizes in the future. The contract as it stands reduces class size by four students by the year 2022 (one student a year for four years). It adds 300 new nurses over the next three years, as well as 80 new teacher librarians and 17 new counselors. One additional counselor will be provided for every 500 students. The district also agreed to hire an attorney to support immigrant families in the district as well as to create a joint task force to create greener play areas.

Regarding charter schools, the Board of Directors agreed to pass a resolution calling on the state to establish a charter school cap. Further, in relation to standardized testing, a task force was created to make a plan to cut testing in half.

Randi Weingarten, president of the American Federation of Teachers, said the new contract was a “paradigm shift.” She said, “For the first time in recent memory, the conversation has focused on how to fund our schools so students have the support they need.”

Los Angeles Mayor Eric Garcetti said, “This is a good agreement. It is a historic agreement.”

However, not all teachers were happy with the results of the strike. Looking at online forums, many teachers expressed frustration with the contract, with the process, and with the UTLA leadership. Teachers seemed particularly angry that they were given only a few hours to read and understand the complex 40 page contract, and expressed outrage that there was no time for them to learn the details of the contract, much less discuss it amongst themselves.

Erika Moreno-Massa, a 13 year veteran of UTLA schools who worked in special education for 12 years, spoke with Left Voice about her own frustrations with the contract and the decision to end the strike. “At first, I was really excited that an agreement had been reached. After 6 days of striking, we could finally go back to teaching our students! We heard the news when we were at a huge rally at Grand Park in the morning and we didn’t have any cell phone reception, so we couldn’t look up the details of the agreement. I was initially excited because people were talking about it like it was a victory. When I got to my school a few hours later, we had almost no time to find out about what we were voting on. By 4 pm, we were voting. Even our union rep didn’t really know a lot about the deal and couldn’t answer our questions.

But, when I got home, I started second guessing myself, especially as I spoke to other teachers. None of us had time to think about it or understand what we were voting for. I think a lot of people are second-guessing themselves now because everything was so rushed.

I felt like a pawn throughout this ordeal. UTLA and LAUSD weren’t always transparent and no one knew what was going on. LAUSD vilified us while UTLA reveled in the spotlight. I felt played. I wonder, was this strike worth it? Did we win enough? Was it worth the days we were out and the learning our students missed out on? Was it worth the days we are going without pay? We didn’t get paid for the days we were on strike, which was a huge misconception.”

Discontent with the contract, as well as the process, was echoed on UTLA’s facebook page, where there are almost no positive comments about the agreement: 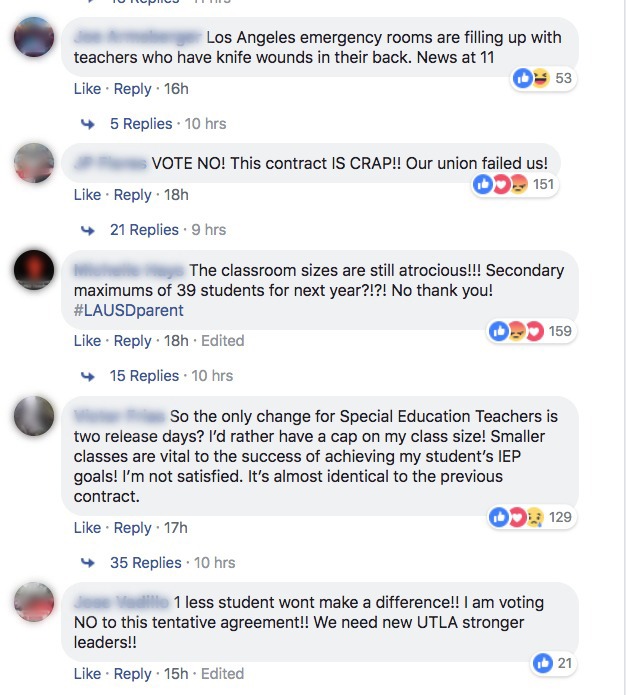 Despite these online complaints, according to union officials, the vote in favor of the contract by rank and file teachers was overwhelmingly in favor of ending the strike.

Yet, many teachers know their working conditions and students’ learning conditions are still unacceptable. Huge class sizes will still characterize LA schools and no immediate step has been taken to curb the spread of charter schools. California is the 5th largest economy in the world, and home to massive corporations run by the wealthiest people on earth. And yet, LA classrooms will still have more than 36 students to a classroom.

Ultimately, these strikes show that workers’ struggles have the power to do more than win wages; they can help shape society more broadly. As Moreno-Massa put it:

“[The strike] was hard, it was really emotionally exhausting. Every day I would get home and just cry. We woke up early every morning to walk the picket lines at 5:30 AM. In LA it doesn’t rain a lot, and people hate going out in the rain, but we were out there every day. We were out there walking the picket line, and then out there at the rallies, thousands of us. That unity really strengthened our cause… And that is what I’m really going to remember from this. The experience of all of us teachers together fighting for education.”