The labor movement should fight against police violence and support the City Hall encampment. 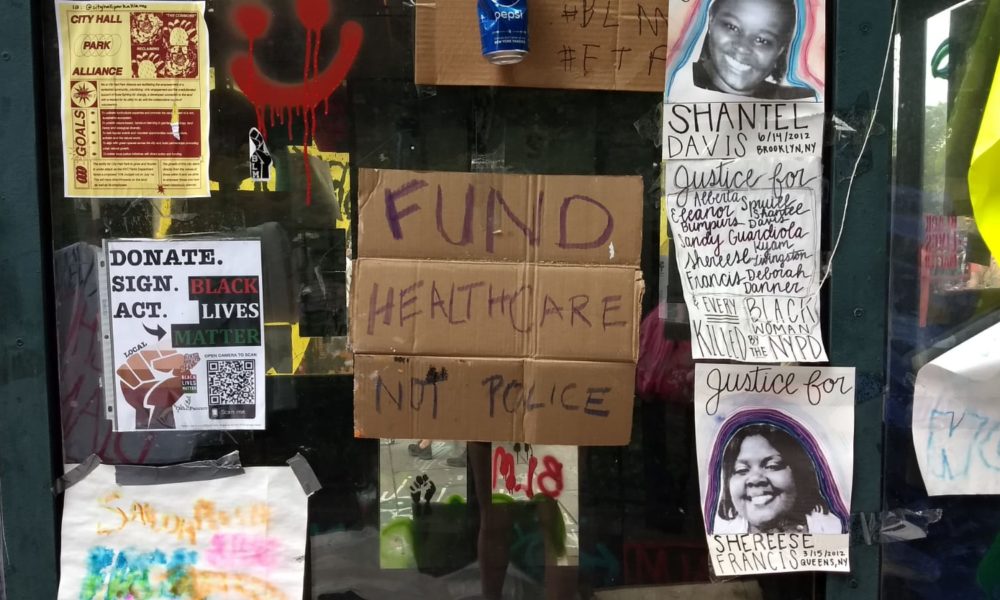 The occupation of New York City’s City Hall has become the hub of the Black Lives Matter movement. Originally, the occupation was organized by the non-profit VOCAL-NY demanding to defund the police by $1 billion. However, as thousands of people have joined in the past few days, people want more than that —- much more.

First established Tuesday, June 23, the occupation originally demanded that the NYPD be cut by $1 billion. Since its establishment, the occupation has only grown and expanded its base. Thousands of people have come through. It’s led by young people of color, who are mobilizing against racist police violence. More and more, members of the occupation are drawing connections between racist police violence and the perpetuation of a racist capitalist system. There are also connections being drawn between the current economic crisis in the U.S. and the fact that the Covid-19 pandemic is disproportionately affecting people of color.

VOCAL initially planned to occupy the park across from City Hall until the budget vote on June 30. Their demand was the defunding of the police by $1 billion. However, the people in the camp want much more than that. There have been ongoing discussions in evening open mic sessions as well as in small groups throughout the occupation. Ultimately, thousands of people at the camp are coming to the conclusion that police protect property, not people. There have been calls on the city to redirect the money currently allotted to the racist, murderous gang that is the NYPD and other entities that hurt the working class toward community needs: healthcare, education, housing, and more.

Labor and the Encampment Are Fighting the Same Struggle

As a healthcare worker, I see how Black lives are degraded in hospitals. I saw how Black people disproportionately died of the coronavirus and how the subways were packed with Black and Brown people traveling between home and work during the pandemic. People of color were disproportionately represented among essential workers, many of whom were left without hazard pay or PPE.

As many of the occupation’s organizers have correctly identified, the NYPD’s budget has been vastly bloated in the past few decades at the same time as there have been cuts in other vital services that actually benefit the health of NYC’s population, including education and  health care.. Recently unionized nurses in hospitals in NYC were forced to work during the peak of the Covid-19 pandemic without appropriate PPE. This led to the death of multiple union brothers and sisters. Meanwhile, the NYPD walk around the city with military-grade weapons and riot gear. As some have recently noted, riot gear for one officer could buy personal protective equipment (PPE) for anywhere from 31 to 55 healthcare workers.

There is money for high-quality public health care. It’s in the pockets of the capitalists, who need the police to protect their wealth.

Organized Labor Should Support and Defend the Occupation

While the coalition and its demands continue to grow, the sector that has been absent in supporting the occupation is the labor movement. Granted, some unions have backed the call for a $1 billion cut in the NYPD budget, but as the occupation grows in size and scope, unions should mobilize in its defense.

The occupation increasingly identifies how policing is incompatible with public health and well-being. Ultimately, funding for police is in contradiction with the labor movement’s goal of protecting workers. Existing to protect capital, the police are not workers but the attack dogs of the bosses. They terrorize communities, disrupt and destroy strikes and other labor actions, and evict union members from their homes. They terrorize and kill union members and their families. In 2012 for example, NYPD cops murdered Ramarley Graham in his own apartment after entering without a warrant. Graham was the son of 1199 SEIU’s member Constance Malcolm.

As the occupation continues, labor unions must mobilize their members to defend the occupation. Tonight, the New York City budget will be voted on by the City Council. Without a doubt, even with 1 billion a $5 billion  police budget is too much. In fact, a single cent for this racist institution is too much. In the meantime, the police presence against the occupation has increased, leading to confrontations and attacks last night.

Tonight may be decisive for the occupation. It is very important that labor be represented in the space and that there be a democratic, decision-making assembly to vote on whether or not to stay as well as on what demands should be taken up. Demands like kicking cops out of our unions are crucial.

Additionally, unions should be organizing their members and finding whatever ways possible to halt the gears of capital throughout New York City until the occupation’s demands are met. This could mean organizing strikes, work stoppages, work slowdowns, solidarity breaks, etc.

In solidarity with efforts of the City Hall occupation and the movement against racist police violence around the country, local union rank-and-file union members nationally are also demanding that police are expelled from their unions. For example, rank-and-file members of the Service Employees International Union (SEIU) have started the campaign “SEIU Drop the Cops.” Recently, the Delegate Assembly of the Professional Staff Congress (PSC) union in New York City passed a resolution demanding that the AFL-CIO “end its affiliation with the International Union of Police Associations” (IUPA).

These national efforts are crucial as study after study shows that cop unions continually work to stop even the most mild reforms that would curb their ongoing violence. Studies also show unionized police are more likely to be part of excessive force complaints.

The labor movement in New York City must mobilize to defend a growing occupation of people who are demanding to defund and abolish the police. Last night, gangs of highly militarized police are descending on the occupation. The labor movement nationally must join to oppose racist police violence, demand our unions no longer harbor cops, and help organize a society without the racist institution of policing or the white-supremacist, capitalist system it defends.