Mexico goes into mourning after finding a clandestine grave with at least 31,000 bone remains in “Las Abejas” Ranch in the municipality of Salinas Victoria in the northern state of Nuevo León. 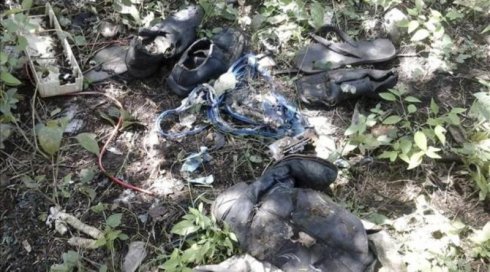 This article was originally published in Spanish in La Izquierda Diario on September 2, 2015.

The horrific site was uncovered by a landslide triggered by heavy rains that recently showered the region. The exact number of bodies is still unknown, but preliminary studies have matched 31 genetic profiles to those of 31 people reported to be missing in Nuevo León. It will take at least a few months to identify all of the remains.

Nuevo León is currently run by Institutional Revolutionary Party (PRI) member Rodrigo Medina, who has been entangled in the affairs of the Monterrey IV aqueduct and will soon leave office. Ex-PRI and now “independent” political candidate Jaime Rodríguez Calderón is set to become the state’s next governor.

News about the mass grave found at the end of August surfaced on September 1, less than a month before the one-year anniversary of the forced disappearance of 43 students from the Raúl Isidro Burgos Normal School of Ayotzinapa.

According to the reknown Mexican newspaper, La Jornada, there have been about 1,500 disappearances in Nuevo León since 2007. However, detailed information is scarce and officials say those murdered could be victims of either Los Zetas or the Gulf Cartel.

With a closer look at the different cases in which government authorities were involved in mass killings, such as the massacre of San Fernando in Tamaulipas, Iguala, Tlataya, and Apatzingán, could it be that state institutions have even more blood on their hands?

The identified remains had names, faces, and people who loved them and awaited their return. They were daughters, sons, boyfriends, girlfriends, spouses, friends, mothers, and fathers. They might have been locals, from another state, or even migrants from Central America in search of a better life in the north.

They all had dreams, hopes, and fears. The rain brought them back from the space of forgetting, from the naturalization of death and violence.

Signing the Mérida Initiative was one of the most significant boosts to modern U.S. imperialism in the region. The pact brought the United States, Mexico, and Central America together in 2008 under the leadership of Felipe Calderón and George Bush, who was responsible for financing the war on drugs.

The Initiative was the economic and political instrument that enabled the militarization of Mexico and the rest of Latin America, deepening the region’s subordination to U.S. imperialism.

Agreements such as the Mérida Initiative have cost hundreds of thousands of deaths, forced disappearances, and all types of human rights abuses for both Mexican citizens and migrants who venture in to the country in search of a better life in the United States.

Less than a year ago, hundreds of protests took place in Mexico, the United States, and around the world demanding accountability for the 43 students from Ayotzinapa and dozens of organizations called for human rights protections for migrants whose lives are constantly at risk due to the Mérida Initiative.

Thousands of latino activists spoke out against the war on drugs, which has displaced them from their places of origin and forced to flee from the violence that is tearing Mexico apart.

The uncovering of the mass grave in Nuevo León is outrageous and adds greater gloom to the recent murders of Rubén Espinosa, Nadia Vera, Yesenia Quiroz, Alejandra Negrete a d Mile Martín, on top of the 1,909 femicides that have been officially recognized as such between 2007 and 2012 – and how many more, uncounted and unrecognized?

The mass grave also adds to the hundreds of thousands of working-class and low-income Mexicans who have been caught in the horrors of the drug war, murdered or disappeared.

As Mexico stands drenched in blood, it is imperative to stop further militarization. In response, the women and men of the working class have taken the streets in resistance against structural reforms. Others have joined, including the youth, with demands for educational rights and the “appearance” of the 43 students of Ayotzinapa; indigenous groups who fight against multinational projects destroying their lands; and journalists and independent photographers who demand freedom of press and justice for Rubén Espinosa, Nadia, Yesenia, Alejandra y Mile. Because when the movement is set into motion, the strength from below is unstoppable.