Latin America, New Epicenter of the Pandemic: Coronavirus and Imperialism Lead the Region to Disaster

The WHO warns that Latin America has become the new epicenter of the pandemic. Together with the coronavirus, the region’s inequalities and imperialist oppression will have fatal consequences. 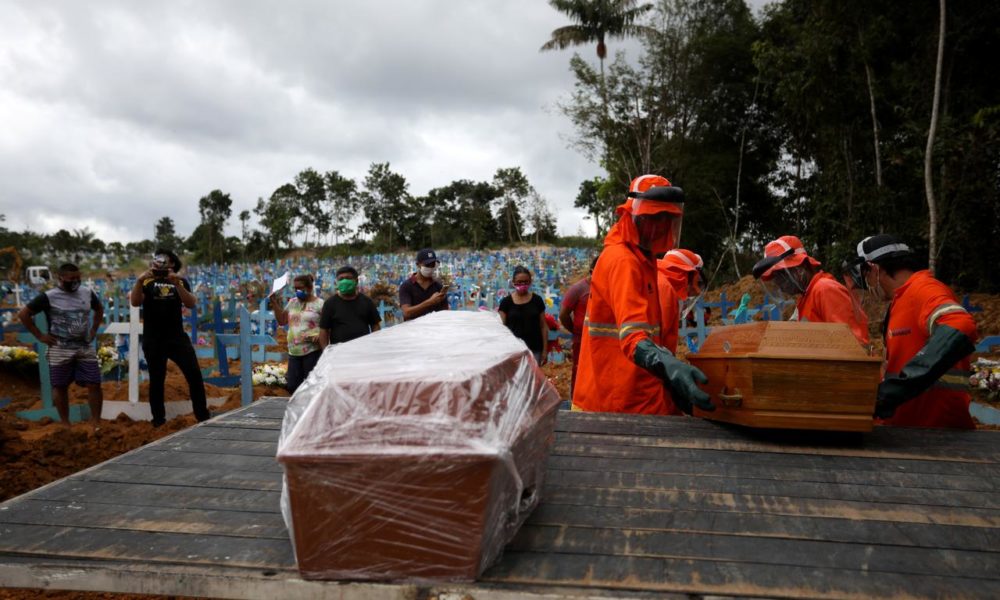 Gravediggers at a mass burial at the Parque Taruma cemetery in Manaus, Brazil, May 26, 2020. Credit: Bruno Kelly

Three months after the first case of coronavirus in Latin America was diagnosed in Brazil, Latin America has now become the new epicenter of the global pandemic. The WHO has warned that the region is now the most affected by the coronavirus. Overall, there are more than 700,000 positive cases. The consequences of the pandemic in Latin America are already very serious, and the forecast is ominous: the epicenter of the pandemic has shifted from China to Europe and then to the United States — now it is hitting the Latin American region, under dire conditions of poverty, debt, and imperialist exploitation.

The most affected country is Brazil, whose right-wing president, Jair Bolsonaro, has publicly dismissed the virus. Brazil accounts for more than half of the cases in Latin America, with 370,000 people infected and more than 23,000 deaths. Estimates indicate that the South American giant could quickly surpass the United States in the number of fatalities. Not only is Brazil the most populous country in Latin America, but it also has the highest rates of inequality and large masses of people living in overcrowded favelas. The youth and the Black population have been disproportionately affected by the pandemic because of the precariousness of both housing and work, a deadly combination. Added to this is a huge political crisis caused by Bolsonaro’s mishandling of the pandemic, which led several officials, including the health minister, to leave the government.

The second-most affected country by infections in Latin America is Peru, whose health system is collapsing, forcing hospitals to admit only those most likely to live, due to the fact that they lack basic protective equipment. Chile is also dangerously close to a health collapse; new revolts have begun in the country over the lack of programs to address unemployment and food scarcity. The revolts against the neoliberal government of President Sebastián Piñera took place last year because of the precarious pension system and the private health care system, which are aggravating the situation of the most vulnerable in the pandemic.

Denialist policies, such as Bolsonaro’s, have had catastrophic effects. But this is not the only reason why the pandemic is so serious in Latin America. The case of Peru is emblematic: despite social distancing and quarantine measures, workers have been forced to continue circulating, because they depend on the informal economy to survive, selling what they can each day in the streets. This has caused the number of infections to rise to more than 100,000, collapsing the health system. In Bolivia, informal workers, who play a crucial role in the country’s economy, are hardest hit by the virus because of lack of protection and the economic crisis; the coup government has responded by increasing militarization and using the pandemic to increase political repression.

But we cannot ignore the fact that imperialist exploitation has had a catastrophic effect on the region: decades of neoliberalism have underfunded health systems throughout Latin America. The systematic indebtedness of the region caused by the IMF and other international organizations has accentuated the fiscal deficits that now aggravate Latin American economies. Even in the midst of the pandemic, and with recommendations to delay the payments, some countries are renegotiating their foreign debts with financial speculators and international organizations, such as Ecuador and Argentina. In this context, the government of Lenin Moreno in Ecuador approved a budget cut that affected working hours and pensions, and fired thousands of workers in the public sector. This has provoked massive protests.

Governments of all political hues in the region have shown that they do not want to break with imperialism. The United States, while closing its borders with Mexico to prevent the entry of migrants, is pressuring the neighboring country to reopen the maquilas, true caves of exploitation that now represent a risk of illness and death for working women there. Trump restricts access to migrants but has no complaints that U.S. companies are exploiting workers in Latin America and in the United States itself. We have seen this in the meat-processing plants that have been transformed into factories of death for a huge migrant population that cannot even organize and is at a disadvantage since they lack English-language skills. Using racist rhetoric, the U.S. government demands that no more migrants enter through the borders, denies migrants access to the health system, and has even intercepted the shipment of medical supplies from China for use in the United States.

In a world where the capitalist class closes ranks against the workers and poor of all countries, and attempts to divide and pit workers against each other, international and working-class solidarity becomes a fundamental task for our class.