This year Left Forum is taking place from Friday, June 1 through Sunday, June 3 at The John Jay College of Criminal Justice in New York City; the theme is bringing together the broad left and rising movements in face of the Trump presidency and the embolding of the right. Featured speakers include Juan Gonzalez, Jane Sanders, Silvia Federici, Cathy Dang, Ajamu Baraka and others. 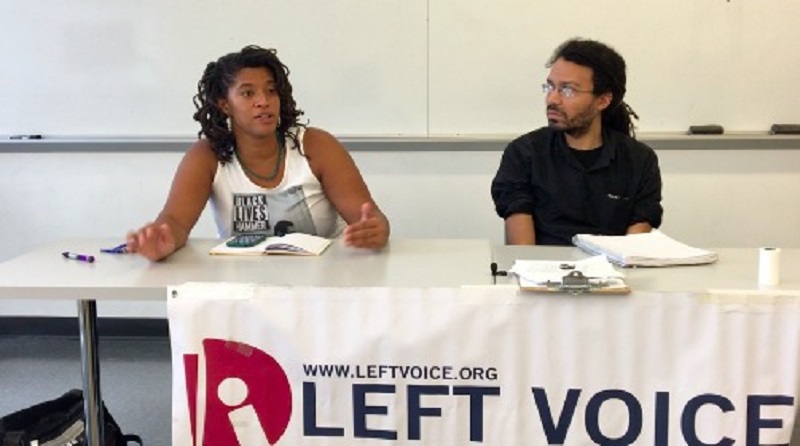 Among the many ideas present at the conference, we encourage you to come to our panels and discuss Left Voice’s perspectives on the current struggles and what lies ahead. Left Voice will be presenting three panels:

For the majority of people in the U.S., healthcare is a system in crisis – a landscape marred by subpar services, unequal access, racial inequalities, millions of uninsured, rising premiums and soaring debt. This trillion-dollar industry reaps massive profits for hospital execs, insurance corporations, pharmaceuticals and technology firms while patient care facilities are put on the chopping block and working-class communities struggle with prohibitive costs. In New York City alone, 16 hospitals have been shut down since 2003. Heightened competition, management-by-stress, technological advancements, rapacious profit-mongering, neoliberal policies, and the weakened position of labor unions have led to intolerable conditions for workers and patients. However, healthcare workers are not taking this lying down.

In recent years, nurses have been at the forefront of labor battles and audacious strike actions. The force of healthcare workers – many of whom are women, immigrants, People of Color, and more widely unionized than other sectors – supported Black Lives Matter, went on strike, and fought for better staffing and universal healthcare. Those watching the recent strike wave among teachers have pointed to the strategic importance of the unrest brewing among both educational and healthcare workers. Join a discussion with frontline workers who are practicing and exploring what it means to be socialist on the job, in the union, and in a brutal healthcare system.

For the past two decades, Latin America — particularly the Southern Cone — have been characterized by a leftward turn under the so-called “Pink Tide” governments. However, deepening economic crisis and mass discontent spurred by increasing austerity have resulted in reactionary trends and new right-wing governments assuming power.

In Argentina, neoliberal president Mauricio Macri represents this backlash against the Pink Tide. In Brazil, the right-wing government of Michel Temer came to presidential power through an institutional coup d’etat with an explicit agenda to gut pensions and labor protections. Mexico, which had been a privileged partner of the United States, is in the midst of a humanitarian crisis as a result of U.S. imperialist oppression and the war against drug trafficking.

As new regimes attempt to take political control, workers, the left and the popular movement are beginning to struggle. In Argentina, there have been mass mobilizations against the austerity program and the repression of the government. In Brazil, there has been significant resistance against the coup, the assassination of the socialist city council member Marielle Franco, and new austerity. In Mexico, organized struggle has emerged against militarization, imperialist dispossession, and for the rights of migrant workers. This panel will deal with this and other questions of the current Latin American reality.

The fight against racism is a class issue. Attacks on Black people, Latinos and other People of Color are attacks on the entire working class. Meanwhile, attacks on workers’ rights and working conditions embolden racists and the right wing. This year’s Teacher Spring showed the potential for a new wave of class struggle at the same time that Black youth are rising up against racism and police murders. The struggle against bigotry which has heightened during the Trump administration is interlinked with police murders and attacks on worker conditions.

The panelists — three rank-and-file workers — will discuss their experiences in overcoming racial divisions imposed by the bosses and linking workplace struggles to the struggles against police brutality, deportations, and other forms of racial oppression.

How can labor activists and oppressed peoples unite? What has been the role of the police in class society, and how can workers organize to fight police terror? How can we build a workers’ movement that not only seeks to improve immediate conditions but also can make political gains and overcome the racial, gender and other divisions that capitalism has created?