Welcome to the Left Voice 2020 Elections Live Blog, where we’ll be updating this space with the latest news as U.S. voters head to — and wait at — the polls. Do you have news that should be included? Pictures of long lines, voter intimidation, or something else? Send them to us at [email protected]! 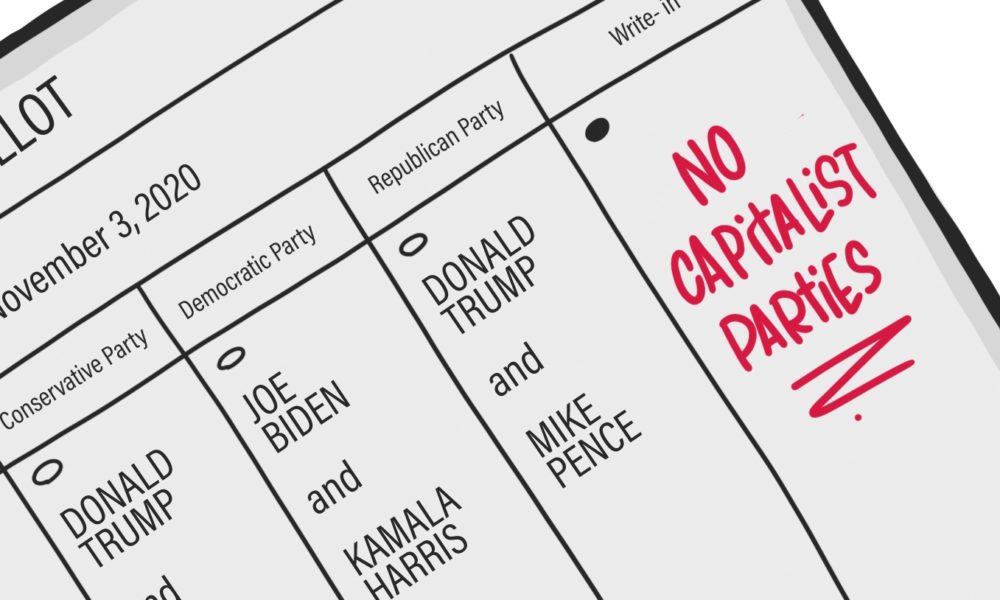 The Protest Wave Has Begun

People in Raleigh, D.C., Portland, and elsewhere are tweeting out videos and reports from protests that are already beginning as the election looks like it will be a closer race than many expected. There are more protests already scheduled for tomorrow, “regardless of results,” and even more in the coming days to pressure states to make sure every vote is counted. Police have been documented snatching protesters in D.C.

A group of protesters in Raleigh, North Carolina, were repressed by police tonight. As much of the country breathlessly watched pundits discuss the election results, protesters took the streets, chanting “whoever wins, we lose.” They marched through the city’s streets, closely pursued by Raleigh cops in unmarked vans and tactical vehicles. Protesters burned American flags to protest an election in which two servants of the capitalist state are duking it out to decide who will oppress us in the coming period. At around 10 pm, the police declared the gathering “unlawful” and broke it up. This is certainly a prelude to what could be greater repression of protests if they continue after the election.

Tune in at 9:30PM ET // 6:30PM PT for our live Election Dispatch with @MaryamAlaniz, @mjfreeman02, and @tcozzar1 where we will be discussing the political situation and the election results as they come in. Tweet us your questions!#Election2020 pic.twitter.com/KsYBhhbsjj

A video was posted to Twitter early this morning showing a voting machine rejecting someone’s ballot. In later tweets, the user elaborated that the machines were accepting the first page of each ballot but not the second, that this was happening at multiple precincts, and that voters were being instructed to leave their ballots for hand-counting or scanning of the second page later on.

All voting machines down at the same time Fort Myers, FL. pic.twitter.com/43kvXsXrfH

Dana Nessel, the Attorney General of Michigan, tweeted this morning that people are receiving calls encouraging them to stay home and avoid the lines because voting will still be open tomorrow, on Wednesday. This is a lie.

Getting reports of multiple robocalls going to Flint residents that, due to long lines, they should vote tomorrow.
Obviously this is FALSE and an effort to suppress the vote. No long lines and today is the last day to vote. Don’t believe the lies! Have your voice heard! RT PLS.

The right to vote may not be enshrined in the U.S. Constitution, but voter suppression is.

The Most Important Election of Our Lifetimes…Again?

“It’s the most important election of our lifetime”– a phrase used every four years to get us to vote the lesser evil.

An entire county in Georgia lost the ability to log votes for several hours this morning, after officials say poll workers incorrectly loaded information into the system, causing a county-wide computer malfunction. Spalding County elections officials hurried to distribute provisional ballots to all of the polling sites, but the error caused significant delays. Some voters spent all morning waiting, while others chose to leave with the intention of coming back later in the day. Although the malfunction was fixed by noon EST, the Elections Supervisor of Spalding County said that polling places would not stay open later to correct this error unless there was a court order.

Spalding County is located just south of Atlanta, and is home to nearly 70,000 people as of the 2010 census. Trump won the county by approximately 6,000 votes in 2016. Given that Georgia is a key swing state this year, this malfunction could have serious repercussions on the outcome in the state.

In addition, this malfunction is part of a larger pattern of voter suppressions in areas with a high amount of Black and Brown voters. Spalding County is roughly 34.9% Black, which is over twice the national average. Areas with a high number of minority voters are systematically underfunded and underserved when it comes to polling places.