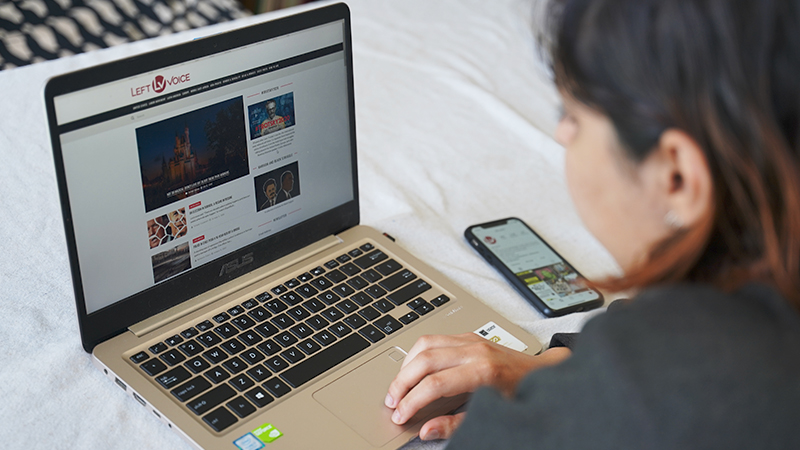 July 2020 marked five years of Left Voice as the English-language section of the La Izquierda Diario network, which publishes in over 12 countries and 5 languages. Over that time, we’ve grown with a website that reaches hundreds of thousands of people per month. Left Voice is made up of dozens of militants working together on the publication, as well as in struggles on the ground to build a revolutionary organization in the belly of the imperialist beast.

We began our work in the U.S. with the publication of a digital newspaper in the spirit of Iskra, using the newspaper as Lenin used it in the years before the 1905 revolution. This is essential to Left Voice’s hypothesis of construction. We did not declare ourselves a “mini party” around a program (artificially written without having strong roots in the working class and the American vanguard); instead, we aimed to begin a newspaper that could act (in many aspects) as a collective organizer and, in this case, take up the best elements of the U.S. Trotskyist tradition, as well as fusing with new left sectors that emerge. We plan to build a group based on discussions, class struggle, study and a fusion with new and experienced socialists in the US, based on strong revolutionary principles.

Further, the website can serve as a foundation from which to advance towards a common program for the United States, taking up key questions for revolutionaries. Although we do not claim to have a completed program for the US, the website already does serve to reflect aspects of a revolutionary program. On one hand, Left Voice is part of an international, the Trotskyist Fraction, with groups in Latin America and Europe that serve as an important programmatic basis on which we do work. Our tradition has written about key questions for leftists, from Syriza, to the Pink Tide governments. In the US, the combination of developing the newspaper and the pressure to respond to political and class struggle phenomena has allowed us to partially advance in programmatic aspects (class independence, anti-imperialism, the fight against racism with a working class strategy, etc.).

Left Voice is uncompromisingly revolutionary and socialist. Our articles are focused on a discussion of revolutionary program and strategy, as well as news from class struggle in the US and around the world. We are uncompromisingly internationalist and anti-imperialist, rejecting campism and actively seeking to highlight struggles from around the world.

We have consistently developed a clear profile of class independence on our website: we believe the working class needs its own, revolutionary socialist organization. We believe that lesser-evilism or any faith in the Democrats is a dead end.  We believe that a central task of socialists in the US is to be anti-imperialist and thus, enemies of both the Democrats and Republicans. In this sense, we’ve made a name for ourselves arguing against support for Bernie Sanders and now, Joe Biden.

Further, through the website and the interventions of militants, Left Voice has connected with sectors of the working class. For example, at the beginning of the pandemic, we put forward a revolutionary program and were able to amplify the messages put forward by essential workers and Left Voice members, like Tre Kwon and Mike Pappas, who are healthcare workers. They represented deeply felt problems and articulated them as part of a larger indictment of the capitalist system, acting as what Lenin called “tribunes of the people.” We agitated our program against the pandemic both from an international viewpoint (statements of the Trotskyist Faction) and from the national viewpoint (Left Voice statements and several articles). We advanced a revolutionary perspective towards the Black Lives Matter movement, amplifying the message of figures of the anti-racist struggle like Julia Wallace and connecting with the New York City vanguard at protests and at the occupation of City Hall.

As Left Voice grows, the website will remain the star around which our activities orbit, allowing us to continue to reach new and wider sectors of the vanguard and the working class and to discuss with new revolutionaries forged in the increasingly confrontational struggles of the current economic, political, and social crises.

Concretely, Left Voice chose to begin as a publication because of the real conditions facing the revolutionary movement in the U.S., which has been, on the one hand, incredibly fragmented and weakened, and on the other, faced with a new generation that is turning to socialism. In this context, Left Voice created the publication so that we could reach many more people beyond our small forces with big ideas. It is around agreement on these ideas that we can advance towards becoming an organization with a program.

To this end, the publication is a valuable tool on many levels. It can be a means by which to amplify militant interventions (as Left Voice did at the beginning of the pandemic with the healthcare workers’ struggle), to foster the revolutionary imagination of small sectors (by covering workers’ struggles that don’t get picked up by the bourgeois media), and to analyze and denounce the injustices and contradictions of capitalism wherever they appear (elucidating the deep connections between racism and capitalism, for example). It can be a platform on which to put forward a programmatic response to political phenomena.

Beyond that, however, the website is also an indispensable tool for building and continuing to develop strong cadre. Working on the website helps militants learn how to apply theory and strategy to the unfolding events of the actual world situation and trains them in the analytical methods of Marxist analysis. Internally, the writing of articles and the exercise of thinking about what to cover and how to cover it is a valuable school of revolutionary theory that will help Left Voice dialogue with broad sectors and develop a comprehensive program for revolution. It can be a way to meet socialists around the country and indeed, around the world and bring about political debate and dialogue.

Even as members of Left Voice play a role in on the ground struggle, the website acts as another plane of intervention in two aspects. Firstly, the website is a way to develop political struggle with sectors who can be drawn into a revolutionary project. It can be used to “clash” with the vanguard of the current and future movements to lead them to break with ideas or assumptions that move them away from revolutionary strategy. This is one of the roles of Left Voice — there are very few spaces in the U.S. where the left and the vanguard of various struggles can draw conclusions and have real political discussions. The website can also be used to argue with centrist organizations — those that use revolutionary rhetoric while being reformist in strategy — in an effort to win over their more radical sectors to a revolutionary perspective and strategy.

Secondly, there is no party without a program. Left Voice’s website already conveys partial aspects of our program. It can be used to put forward our proposals — based on our interventions and broader analysis — for the coming crisis as well as a more comprehensive program (or plan) for the road to revolution.

The press, of course, is not the only component of the party we hope to build — our goal is not and never has been just to build a website with a lot of hits. While attempting to reach a broader set of new readers is important and worth doing, simply focusing on getting a larger number of hits will not necessarily help Left Voice accomplish our tasks or overcome our shortcomings. However, expanding our readership and getting a sense of what people react to are important tasks, as these factors help us break the isolation that comes with our current size, the fact that our strongest accumulation is centered in NYC, and that we are a very young group.

Today, we find ourselves at a turning point: in a moment of social, economic, and political crisis, Left Voice is in a new position of being able to dialogue with the vanguard directly and try to bring them closer to revolutionary politics and convince them of the need to build a revolutionary party.

Left Voice’s aim is to organize the advanced elements of the vanguard that include revolutionary elements coming from the Trotskyist tradition and the left wings of the most dynamic political phenomena that have emerged in the last several years. Moving forward, we aim to significantly increase the influence and reach of the publication, grow in militants and collaborators, and elaborate a program towards the foundation of a political organization in the United States.