Supporters of the news website Left Voice have launched a campaign in solidarity with the 97 dock workers employed by Hutchison Ports Australia who were sacked by text message and email on the night of August 6. 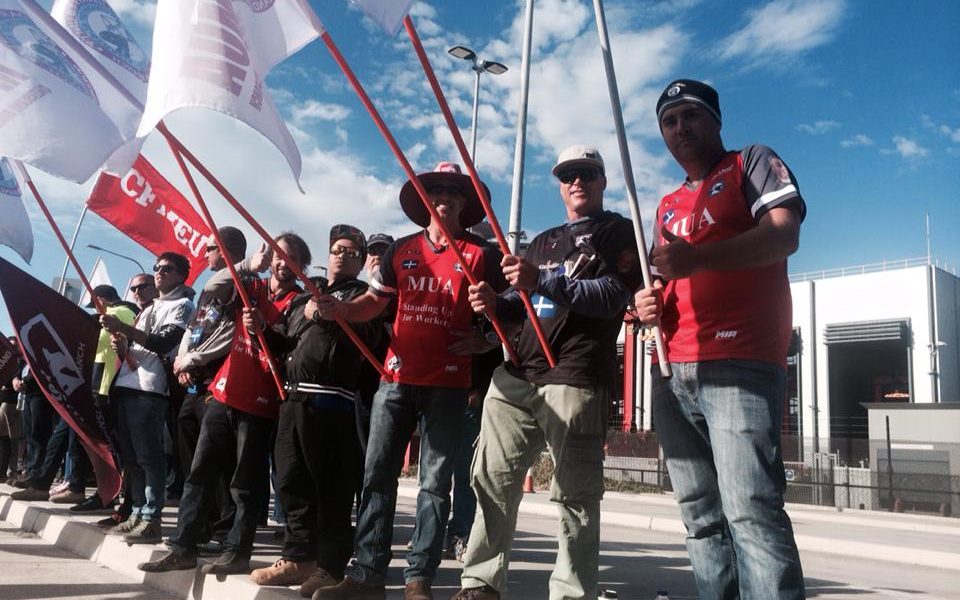 Left Voice is gathering signatures for an online petition that calls for the immediate reinstatement of all 97 sacked “wharfies” (as they are called in Australia), all of whom are members of the Maritime Union of Australia (MUA).

The international petition has already gathered dozens of signatures from Argentina. Signatories include left-wing political figures such as Nicolás del Caño, presidential candidate for the Left and Workers’ Front (FIT) and national congressman from the province of Mendoza; Myriam Bregman, vice presidential candidate for the FIT and lawyer for the human rights organization CEPRODH; Christian Castillo, national leader of the Socialist Workers Party (PTS); Raúl Godoy, worker at the occupied Zanon factory, former General Secretary of the Ceramic Workers’ Union of Neuquén (SOECN) and a well-known leader of the PTS; Rubén “Pollo” Sobrero, General Secretary of the Eastern Greater Buenos Aires section of the Railway Union (UF) and Socialist Left (IS) leader; and Juan Carlos Giordano, editor of El Socialista (The Socialist), the newspaper of Socialist Left.

A range of well-known militant trade unionists have also added their names to the petition. These include Claudio Dellecarbonara, Line B delegate on the Buenos Aires subway system (Subte) and member of the Executive Secretariat of the Subway union (AGTSyP); Natalio Navarrete, Assistant Secretary of the Ceramic Workers’ Union of Neuquén (SOECN); Javier Hermosilla and Lorena Gentile, Shop Floor Committee members from the Mondelez (formerly Kraft Foods) factory; Mónica Schlottahuer and Edgardo Reynoso, delegates from the Sarmiento branch of the Railway Union (UF); Eduardo Ayala, leader in the Madygraf (formerly RR Donneley) printing plant that was occupied after its closure last year and is now producing under workers’ control; and Catalina Balaguer, Shop Floor Committee member at Pepsico Snacks.

Current elected representatives of the Left and Workers’ Front (FIT) who have also expressed their solidarity with the sacked wharfies include Laura Marrone and Patricio del Corro from the City of Buenos Aires; Laura Vilches from the province of Córdoba and Cecilia Soria, Noelia Barbeito, Macarena Escudero, Martín Baigorria and Ulises Giménez from Mendoza. Previously elected representatives such as Liliana Olivero from Córdoba and Angélica Lagunas from Neuquén have also added their names to the petition.

Along with the international petition, Left Voice has also launched a bi-lingual English/Spanish online petition at the Change.org website (see details below).

Left Voice is a part of the La Izquierda Diario news network, which aims to bring its readers daily news, analysis and opinion from a socialist left perspective. Since its launch on September 16 last year, La Izquierda Diario has quickly become one of the most influential and widely read left-wing news portals in the Spanish-speaking world. The news network has separate editions in Argentina, Chile, Mexico, Brazil and France.

We urge all readers of Left Voice to add their name to our international solidarity campaign for the 97 sacked Australian dock workers.

The full list of signatories of the international petition can be found at the Solidaridad Portuarios / Dockworkers Solidarity website:https://solidaridadportuarios.wordpress.com/

The Change.org online petition (in Spanish and English) can be found here:
https://www.change.org/p/mark-jack-hutchison-ports-australia-reinstate-all-97-sacked-dock-workers-now