Lessons from the General Strike in Argentina

Reflections on last week’s general strike, the government’s policy of repression, the role of the Left in the strike, the union bureaucracy, and Cristina Kirchner’s silence on the repression. 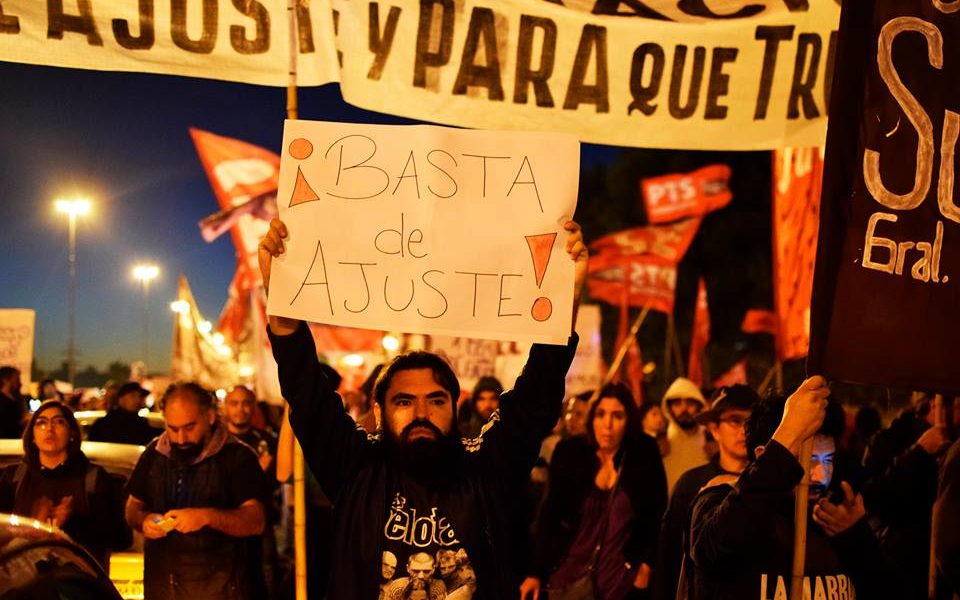 After a month of massive protests in the street, last Thursday, 482 days into Mauricio Macri’s administration, the largest labor union in Argentina, the CGT, carried out the first national strike against the economic policies put in place by the governing party Cambiemos.

The confrontation between workers and the government had been gaining momentum in the days leading up to the strike. The government, emboldened by a march of Macri supporters on April 1, launched a fierce campaign on social media calling on workers not to participate in the strike, questioning the legitimacy of the call to action, and threatening, in various media outlets, to repress any protesters blocking access roads to Buenos Aires.

“This strike has already failed, because a large part of society doesn’t want it,” said Security Minister Patricia Bullrich on Wednesday.

The response of the working class was overwhelming. Millions of workers reacted to the threats by paralyzing the country and turning the action into a clear statement against layoffs, suspensions, inflation, and precarious working conditions. Even workers who had voted for Cambiemos as a result of their dissatisfaction with the Kirchner administration are now expressing their disappointment with the governing party’s unfulfilled campaign promises, such as its pledge to achieve “zero poverty” or end the tax on salaries.

Labor Minister Jorge Triaca’s refusal to report the the official data on the number of striking workers was clearly an unwitting admission of the action’s success.The images of empty streets and closed workplaces demonstrated the enormous power of the strike.

The government represses, the Left takes the streets, and Kirchnerists remain silent

Macri’s administration followed through on its threats of repression. The largest clashes took place at the intersection of the Pan-American Highway and Highway 197, in the north of Greater Buenos Aires, an area surrounded by factories and the setting of emblematic workers’ struggles, like those of Lear, Kraft or Madygraf (the former RR Donnelley print factory now under worker control). This was where the Left and combative unions chose to carry out their largest action. The PTS (Socialist Workers’ Party) organized a road blockade five blocks away from where the Gendarmerie was stationed and faced off tear gas and water cannons. As of the time of publication, the arrested protesters had been released and those who were injured were recovering.

As PTS leader Nicolás del Caño had explained the day before, the actions were carried out “to help the precarious workers, threatened with layoffs by their bosses, to strike tomorrow.”

At the same time, the actions carried out by the Left as part of its policy for a united workers’ front are aimed at showing an alternative to the union bureaucracy. The slogan “strike together, march separately,” implies in this case participating in the strike called by the union federations, but with active methods of struggle, without which the workers’ demands cannot be met.

The Left also puts forward a program to make the capitalists pay for the crisis, in contrast with the program put forth by the union bureaucracy. The bureaucracy’s program combines workers’ demands with those of national businesses, which exploit workers and subject them to precarious work conditions in the same way as the multinationals or to an even greater extent. The program proposed by the CGT (General Confederation of Labor) and the CTA (Argentine Workers’ Central Union) clearly serves the interests of the Peronist opposition groups Victory Front (the Kirchnerists) and the Renewal Front led by Sergio Massa.

The Left has also denounced that this Thursday in its afternoon press conference, the CGT failed to announce any plans to continue the struggle, even though President Macri himself stated that there was no “Plan B” for the economy, meaning that he will continue to govern for big business. The administration’s toughened stance, as shown in its refusal to improve teachers’ salaries after recent nationwide struggles and by the repression on the Pan-American Highway, should be met with new labor actions, launched with the strength of millions of workers.

The Left’s actions, both in preparing for the strike as well as during the strike itself, are aimed at winning workers’ demands and increasing the influence of workers who are independent of the union bureaucracy and the political parties that represent the capitalists.

In reference to the repression, last Thursday, Patricia Bullrich confessed: “It was very symbolic to us, because there is a cultural and political battle being waged here. We know that when there is no public transportation, many people don’t go to work, but it was symbolic to show that we were determined to remove them.”

The same people who supported the roadblocks organized by big agribusiness in 2008 against increased withholding taxes now believe that the “cultural battle” to be waged is the repression of the Left and the combative unions. On the flipside, the government has called for a “dialogue” with the union bureaucracy, which until now has remained inactive in the face of the administration’s austerity measures. The governing party has shown that its formula is to hold friendly meetings with the union fat cats and fiercely repress workers protesting in the streets. There has been no substantive break with the policies of the previous administration. Just a few years before, the Kirchner government had chosen the Pan-American Highway as the site where it would repress workers’ struggles.

The workers of Lear, Kraft, Bus Line 60 and others had firsthand experience with this policy, the precedents of which had been set earlier during the same administration, against the workers of the Casino Puerto Madero, Mafissa and many others.
These past events offer a clear explanation for Cristina Kirchner’s resounding silence in the face of last Thursday’s repression, which was repudiated by several leading human rights figures and organizations, but not by the former president. In spite of their rhetoric and electoral speculations, the current administration and the Kirchnerists agree on the need to repress the Left and the combative unions.

The demagoguery of the government’s accomplices and the left alternative

Like Cristina Kirchner, many other opposition leaders, like Massa and Stolbizer, remained silent on the repression. This is a logical reaction, considering the policies they have been implementing for the past 16 months, during which they helped the Macri government pass its austerity laws. The Victory Front was a key player in this aspect. Meanwhile, governors from all bourgeois parties, including Cambiemos, the Socialist Party in the province of Santa Fe, or Alicia Kirchner (sister of the late former President Néstor Kirchner) have implemented austerity policies in the provinces they govern.

Their intention is to capitalize on the discontent of broad social sectors with Macri’s administration., but without “obstructing” the government’s austerity plans. The unions led by the bureaucracy serve the parties’ interests, especially those of the Victory Front.

Last Thursday, Peronist political analyst Abel Fernández analyzed this issue on his blog, stating: “The key factor, based on the nature of Peronism and from the point of view of actual power, is (…) the workers’ movement. Its leaders cannot guarantee an electoral outcome (…) but they can provide organization, which can overcome the few resources that an opposition force can gather outside of the State. And, as they’ve shown today, they can “bring the country to a halt,” for one day, without active protests (except for the picket lines organized by relatively weak sectors), as a form of catharsis in the context of massive social discontent. But no political leader is capable of doing this (…) An alternative must be found to the current government’s “Plan A,” which I am convinced will fail.”

Fernández concludes that the gap between Peronist political leaders and union organizations must be closed. As in other moments in history (like in the 80s), the Peronist Party is seeking to recover from its crisis by using the unions against the government, capitalizing on the people’s discontent and returning to power to govern for capitalists.

The Left, on the other hand, participates in all workers’ struggles to support them on the path to victory while fighting to build a political alternative that is independent of all capitalist organizations, an alternative without which it would be impossible to conceive of an end to the suffering of the working class. In Congress, on the streets and in every struggle, the Left Front is the only force that consistently fights to achieve this.