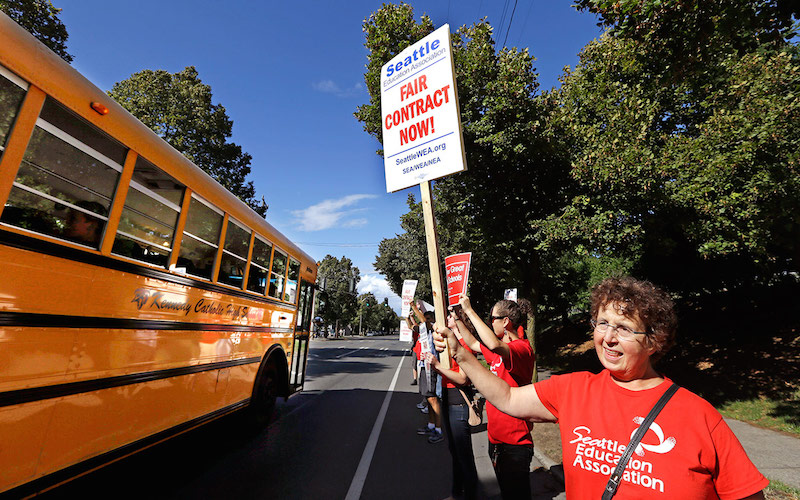 The Seattle Education Association (SEA) strike gained national attention due to the strength with which teachers organized, as well as the immense support from the community. This outside support was due to the fact that educators were on strike not only for their own pay increases, but also for a host of other reasons, including implementing racial equality teams in each school, providing more recess time, decreasing standardized testing, and hiring more counselors and nurses.

While the Seattle teachers strike did win some major victories, they did not come close to achieving all their goals. So why did the SEA decide to end the strike?

Many have noted the reluctance of the SEA to allow their strike to become a mass movement. While the SEA’s demands and the participation of its base demonstrates that it is a social justice union, the SEA needed to be a class struggle union in order to win this strike. Because of the SEA’s failure to see the strike as a class struggle of teachers as workers representing their own interests and the interests of their working-class students against the government, the SEA “compromised;” in other words, they capitulated when there was still a will to fight.

Results of the strike

The SEA strike made various demands, which would benefit teachers and students alike.. On the 5th day of the strike, the SEA negotiators accepted a tentative agreement with the public school district. After a long and heated debate, educators voted to pause the strike and returned to work the following day. On Sunday, September 18, the teachers ratified a new contract.

The strike ended with various gains for the educators —guaranteed 30 minute recess for all, race and equity teams in 30 schools, divorcing teacher performance ratings from test scores, and creating enforceable caseload caps for educational support associates such as school psychologists and language pathologists.

The fact that this strike happened after thirty years without a strike is in itself a small victory. Seattle teacher Jesse Hagopian says , “The most important outcome of this contract negotiation won’t be found in the fine print of the agreement. The true triumph of this contract battle was the achievement of solidarity—between teachers, office professionals, nurses, school librarians, instructional assistants, parents, and community organizations—in the struggle for the public schools.”

However, there were many areas in which educators got much less than what they asked for. Instead of a 21 percent raise over three years, teachers received a 9.8 percent raise, not including cost of living adjustments. Seattle has one of the highest costs of living in the nation and teachers have not received a raise in 6 years, making this concession by the SEA a hard pill for some to swallow. Hagopian says , “It was a mistake to agree to a 3 percent raise the first year, a 2 percent raise the second, and a 4.5 percent raise the third, which won’t do much to even offset our rising cost of healthcare.”

Another concession was around the race and equity teams. While the union was asking for race and equality teams at each of Seattle’s 91 schools, the district agreed to put them in place in only 30. As one Facebook user wrote on the SEA page, “Racism is too common to address it in this minuscule way! As an African-American parent I BEG you all to vote NO until 60 schools get race & equity committees!”

In addition, some of the victories of the strike may prove to be transitory. For example, while the SEA victory included divorcing student test scores from teacher evaluations, Washington State Senate passed a law in March 2015 that mandates the use of test scores in teacher evaluations. If the bill is passed by the Seattle House of Representatives, this victory for the SEA will be struck down by the law.

Errors During the Strike

Despite the SEA strike doing many things right, it made two major errors that indicate the presence of a deeper problem. First, the SEA did not want the strike to take on massive proportions and become combative against the government in order to win its demands. Second, the SEA did not encourage teachers and families in Seattle and nationwide to deeply question the distribution of resources to public schools and did not want to unmask the government role as serving the wealthy.

At the same time that the Seattle teachers went on strike, another group of teachers were also on strike in the nearby town of Pasco, defying a court order to go back to work. According to the World Socialist Website, SEA President Jonathan Knapp argued that this strike had no relevance to the Seattle teacher’s strike . This shows that the SEA refused to massify their strike, separating their local demands from demands being raised in another city—thus failing to demonstrate that the problems of education are not localized, but statewide and even national.

Another tactical error was not calling a mass protest with all of their members, the Black Lives Matter (BLM) movement, and families and teachers from nearby cities. BLM, the largest movement in the United States today, should have been called on to defend the rights of Black kids at schools. As Jesse Hagopian states, “I know that if the union had organized a demonstration with all of our 5,000 members, many thousands of parents would have joined us and the pressure would have been enough to get us big gains on all the major issues we were fighting for. This reality reveals that the key to building the power we need to achieve the schools our children deserve will be in combining social justice demands with a social movement unionism approach that seeks the full mobilization of the membership and the community in pursuit of those demands.”

By combining “social justice unionism,” which mobilized rank and file teachers and social justice demands, the SEA successfully gained public support. But, Hagopian is right–putting 5,000 or more people on the streets would have gotten even more national attention, and would have pressured the government into further concessions. However, what we can learn from the SEA strike is that we need more than social justice unionism that mobilizes rank and file teachers for a specific set of demands; we need class struggle unionism that seeks to massify the movement, connecting the struggles of different groups of workers and oppressed people against the government and the wealthy.

The SEA strike was certainly a social justice strike that organized ordinary teachers and included community and racial justice demands. The SEA is a social justice union: it works to include teachers in debates and decision making, includes a group called “Social Equality Educators,” and strives to win over parental and community support. This union stands in stark contrast to teachers unions that refuse to engage in confrontations with the public school district and with little rank and file participation. Such organizations hardly represent teachers’ needs, much less the community’s. However, despite being a more social justice oriented organization, the SEA failed to understand or explain the nature of class antagonism inherent in a strike, which led to their capitulation to the school district.

The SEA consistently argued that because the Supreme Court of the State of Washington ordered more money to be spent on the Seattle public school district, which has been underfunded for years, there was enough money for the SEA demands. This means that the strike was organized without questioning the allocations and sources of school funding more deeply.

A class struggle union would not only use this new money as justification for the strike, but would also ask its members to look at the class structure of society to understand that it is possible to fully fund public schools. It is necessary for teachers and communities to question the federal and state governments’ arguments that there is not enough funding to be allocated to education. On the federal level, there is consistently sufficient money for an overblown national security budget–by far the largest in the world –yet the education budget is consistently cut by Republicans and Democrats alike .

On the state level, there is not equitable funding by city and district, as property taxes still fund the majority of schools. States refuse to push measures to tax universities, hospitals, and churches, reducing the funding base for schools. Some of the most glaring examples of untapped funding bases are the exempt status of universities with huge endowments and multiple lucrative businesses on their properties.

While each state has its idiosyncrasies regarding how funding for education gets dispensed and used, individual states could close tax loopholes and increase taxes on the wealthiest to better fund public education. These are demands that teachers on strike should be pointing to as a long term goal, since it is impossible to have equitable public education of quality if there is no funding for it and if that funding is not distributed equitably.

Why a class struggle union?

The capitulation of the SEA is not a tactical error, but rather an error based on their conception of the teacher’s relationship to the government. The SEA did not understand that teachers and low income students are in an antagonistic relationship to the government, who, rather than increasing taxes on the wealthy, argue that there is no money. They are in an antagonistic relationship with the government that, while spewing rhetoric about education as the great equalizer, perpetuates systemic inequalities in funding, causing disastrous effects for poor students, especially students of color.

A class struggle union would understand this inherent antagonism and fight for their demands until there wasn’t enough people power to effectively fight anymore. A class struggle union would seek to amplify and expand the fight, by connecting to other teachers on strike and organizing mass street mobilizations. They would publicize the salaries of the top earners in the state and question why those top earners should not be taxed to pay for all of the Seattle teacher’s demands. They would organize national campaigns around Black Lives Matter in schools, seeking national support for their demands around racial inequity.