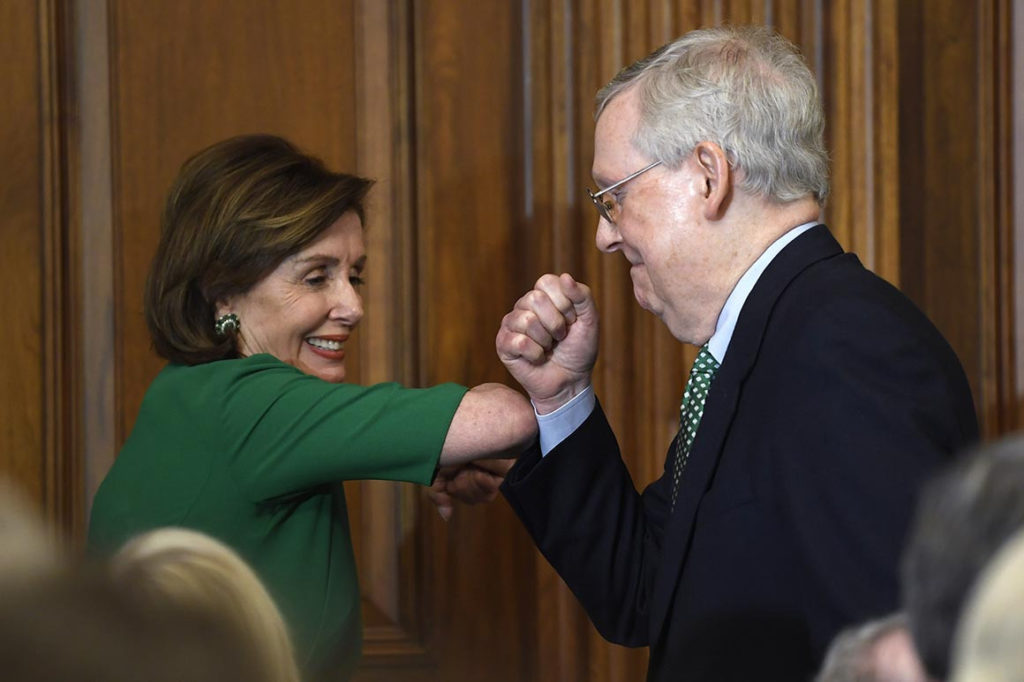 According to popular mythology, Marie Antoinette uttered the iconic phrase when she heard that the French masses were experiencing a horrific bread shortage. Antoinette, surrounded by luxury and already a hated symbol of the monarchy, said that people should eat cake.

It turns out that the quote is a mistranslation, and there’s no evidence Marie Antoinette ever said it. But the story has lived on through the centuries because we are always confronted with out-of-touch elites expressing callous disregard for the struggles of the masses.

Today, “Let them eat cake” is trending on Twitter.

This is because another stimulus bill has finally been agreed on — nine months after the first one was passed. With Covid cases surging, unemployment increasing, and the eviction moratoriums ending, the U.S. working class badly needs this relief.

In response to these crises, Congress has passed just $600 in direct payments — half of the $1,200 checks offered in the spring — and $300 extra in weekly unemployment benefits.

These paltry sums come from a Congress where over half of the members are millionaires: House majority leader Nancy Pelosi’s net worth is over $140 million, while Senate majority leader Mitch McConnell’s is worth $22.5 million.

$600 is about the price of Commerce Secretary Wilbur Ross’s custom made slippers, which he wore to Trump’s address to Congress. His estimated net worth is $2.5 billion.

The pandemic has made clear that members of Congress are far from the only ones with exorbitant wealth: billionaires are making a killing. The Walton Family, owners of Walmart, has pocketed $48 billion since March. Jeff Bezos has raked in $90 billion during the pandemic, while more than 2,000 Amazon workers have been infected with Covid. Bezos could give every Amazon employee $105,000 and still be as rich as he was in March. But of course, Congress isn’t looking to tax the wealthy even a little bit more to help pay for the present crises. Instead, they pretend there is no money for the working class.

While the working class will receive these insufficient payments, the bill predictably includes billions for corporations and even includes a deduction for “three-martini lunches”: a tax break for corporate meal expenses. Congress also just approved the Pentagon budget — a whopping $740 billion, giving the military more than what they requested in some areas. Congress also approved a new border wall bill, worth about $1.38 billion.

Yet Nancy Pelosi claims this $600 check is a “significant amount of money.” This is Congress saying, “Let them eat cake.”

$600 is not enough money to pay one month’s rent in most parts of the country.

And people need significant rent relief. Nearly 12 million renters will owe an average of $5,850 in back rent and utilities by January. About 29 percent of Black families and 17 percent of Hispanic renters were behind on their rent payments. A study a few months ago reported that 25% of New York City renters had not paid since March. The pandemic relief bill would extend the eviction protection, set to expire at the end of the year, until only January 31.

Others have even more dire projections. Newsweek claims that without aid, 35% of Americans could lose their homes in the next two months.

And while unemployment numbers seem to be decreasing as the economy opens, job growth is slowing down. Only 245,000 jobs came back in November — the slowest pace since the recovery began. Restaurants and retailers cut jobs, and more small businesses are closing.

Undocumented people in particular are in dire straits: although they are disproportionately represented in the restaurant industry and thus more likely to have lost their income, they will receive no pandemic relief at all. They also can’t apply for government assistance. Even documented workers are going hungry in the richest country in the world — a policy that was created during the Clinton administration, and was expanded under Trump, blocks access to Green Cards for legal immigrants who are deemed likely to accept any government assistance. This new COVID bill claims to provide aid for undocumented people, although how this will roll out is unclear.

One in eight people in the United States reported that they sometimes or often didn’t have enough food to eat in the past week. That means 26 million American adults are experiencing food insecurity, according to Census Bureau survey data from early November. That number climbed to one in six adults in households with children. 22 percent of Black households reported going hungry in the past week, more than two-and-a-half times the rate for white Americans.

The other key aspect missing from the bill is the assistance to state and local governments, although Congress had previously discussed including $160 billion for this purpose. This will mean layoffs, cuts, and austerity at the local level. State and local governments are projected to face a half-trillion-dollar shortfall through 2022. As Left Voice has explained: “Unlike the federal government, these governments are required by law to balance their budgets and cannot borrow to make up for shortfalls. That means that the federal stimulus will be paired with harsh attacks on the working class and oppressed at those lower levels.”

In New York City, there was already a threat to lay off 9,000 public transit workers. The City University of New York has already laid off thousands of faculty. These are just first examples of what will surely be a long road of brutal local austerity.

Democrats passed a more ambitious plan in the House of Representatives before agreeing on $600 with the Republicans. They agreed to this without any kind of fight, and now these millionaire “representatives of the people” are going to their mansions. This is the same Congress that has given trillions of dollars to corporations since the pandemic began — corporations that have proceeded to fire workers.

While progressive Democrats like Ilhan Omar, Alexandria Ocasio-Cortez, and Bernie Sanders have spoken eloquently and correctly about what a joke this relief bill is, they remain members of a party that cannot even give the working class scraps. Hashtags like #StimulusOrStrike and #GeneralStrike have been trending on Twitter. Yet these “socialists” in the Democratic Party have not made such a call, much less organize their millions of supporters for a real struggle.

In the pandemic, capitalist politicians from both parties have shown they are willing to sacrifice the working class on the altar of profits — and what handsome profits they have made! While workers struggle, both the Republicans and the Democrats say: “Let them eat cake.”

But maybe they should be a little nervous. Marie Antoinette, after all, was put under the guillotine when the masses had enough and started a great revolution. And as this summer’s Black Lives Matter movement demonstrated, working people in the United States are fully capable of uprisings of our own.