Letter to the XXIII Congress of the Partido Obrero 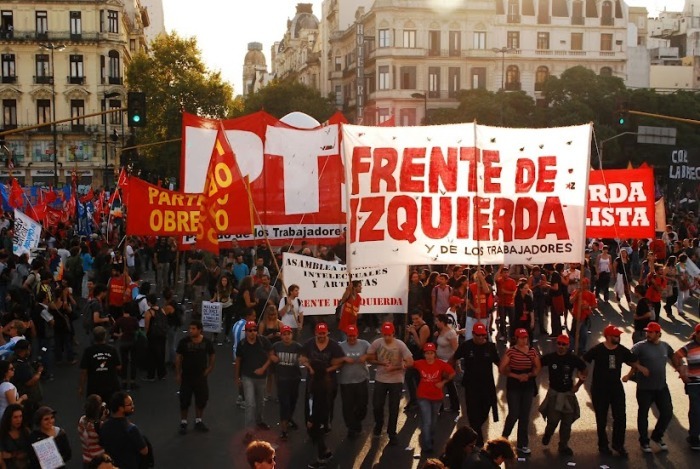 Compañeros and compañeras of Partido Obrero:

We send you fraternal greetings and best wishes for the development of the debate, deliberations and conclusions of your Twenty-Third Congress.

In a recently published statement, Jorge Altamira declared, “Throughout Latin America, the transition from governments that have contained the masses, to governments whose purpose is to develop directly against them, has become apparent.” This is expressed in Argentina by the conservative Macri government, and by the “impeachment” and the coup-like maneuvers of the “judicial party” in Brazil (“judicial party” refers to the legal system, which has assumed the role of an independent political actor in the current political crisis). Both developments have been equally denounced by the PO and the PTS, in the setting of the bankruptcy of center-left popular frontism and bourgeois nationalism across the continent. It is undeniable that we are heading towards an intense period of struggle and mobilization.

In this context, we can only agree with you when you say the key for revolutionaries is to “transform the working class and the Left into the political opposition to ‘Macrismo.’ This means exploiting the tendencies to be found in the masses to struggle against austerity on the basis of political independence. The differentiation from both Kirchnerism and the centre-left should be founded on the basis of a growing political initiative.

The ground conquered by the Left & Workers’ Front (FIT) should be developed systematically through means of agitation, propaganda and organization” (quoted from an article -> http://www.po.org.ar/prensaObrera/1403/politicas/en-visperas-del-xxiii-congreso-del-partido-obrero] by M. Ramal and G. Solano in Prensa Obrera No. 1403, March 17, 2016).

With this aim in mind, we address the Congress of the Partido Obrero with a series of proposals – which we also extend to the comrades of Izquierda Socialista (IS – Socialist Left) – some of which are a reiteration of initiatives that we previously raised in late 2015.

1. For a Conference or National Meeting of the Left & Workers’ Front

As is affirmed in the aforementioned statement, “the vote for the ‘Pacto Buitre’ (Vulture Pact – the agreement by the Macri government to start paying back part of the country’s foreign debt) has exposed the political poverty of Kirchnerism, which nevertheless tries to place itself at the head of popular opposition to the government.” In this period, the potential role for the FIT, with its program of working-class political independence, is extraordinary. It would be criminal for us not to unite with the aim of strengthening the FIT because of the political differences between our organizations. This unity would allow us to take a leap forward in the national reality, both at the superstructural level through our interventions in various legislatures, and in the context of class struggle and the strategic fight to reclaim the trade unions from the hands of the bureaucracy. A Conference or National Meeting of the members and supporters of the parties of the FIT should be convened on the basis of the program and agreements that unite us, and not just a place to argue about the disagreements among us (without diminishing the importance of debate).

In the same way, we should remember the impetus of common action in class struggle, through our parliamentary interventions, and through campaigns of mass agitation against the Macri government policies and its counterparts with the Frente para Victoria (FpV – Victory Front, Peronist electoral alliance) in the provinces.

The class-struggle left has an historical opportunity that we cannot squander.

We propose that this gathering take place this April or May with an organization agreed upon by all three forces that make up the FIT.

2. A Latin American Conference of the Revolutionary Left

As Altamira affirms in the statement above, we cannot remain without initiatives in the face of the events we are living through in our own subcontinent (the move from bourgeois governments of containment, to governments that directly attack the standard of living of the workers and popular masses). The twilight of the “process” of nationalist or center-left governments and the scenario of fights and open clashes between the classes in the next period in countries such as Brazil and Argentina requires the revolutionary left to take a position and common intervention. The Fracción Trotskista (FT – Trotskyist Fraction, the international current to which we belong) has important groups in Brazil, Chile and Mexico, as well as organizations in Bolivia, Uruguay and Venezuela, with which we can work out the concretization of this Conference in order to hold it in the middle of this year.

a. A workers’ and internationalist rally of the Left & Workers’ Front (FIT) this coming May Day at Luna Park Stadium in Buenos Aires or a similar venue, to which we invite comrades from Brazil to speak – in light of the process that is developing there – along with important figures in the workers’ movement and the FIT.

b. Aside from our public differences over how to carry out our parliamentary work in common in the National Congress (blocks or interblocks), the legislatures (CABA, PBA, Córdoba, Mendoza, Neuquén, Santiago del Estero), and the city council of Mendoza, we insist on the proposal for national coordination and for local coordinators to meet weekly so that we can act in common.

We hope that these contributions may enrich your Congress, to which we send fraternal greetings.