Q: Tell us a bit about LGSMigrants. How did you begin and what demands are you fighting for? A: LGSMigrants was set up in autumn of last year. We had been watching the horrific consequences of European border policies all spring and summer, including all the drownings in the Mediterranean, the worsening situation in the […] 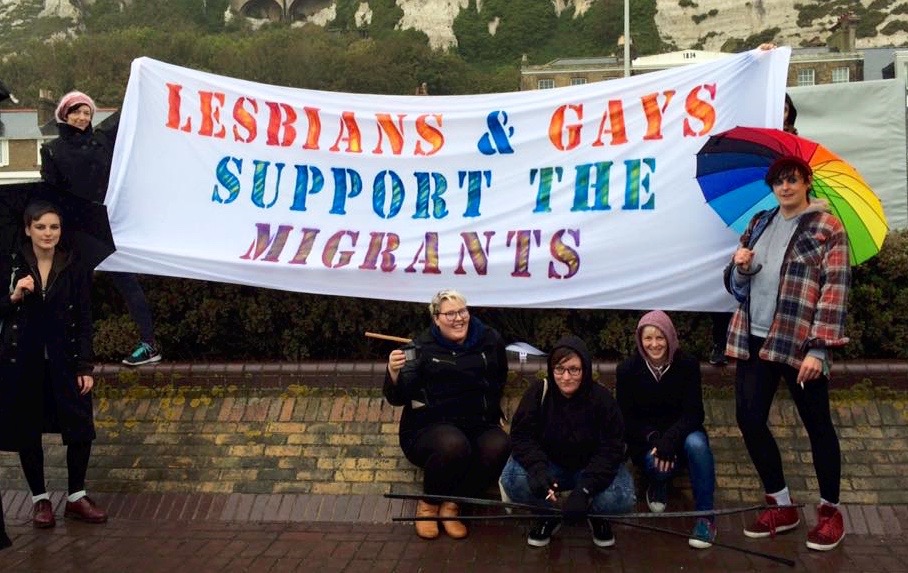 Q: Tell us a bit about LGSMigrants. How did you begin and what demands are you fighting for?

A: LGSMigrants was set up in autumn of last year. We had been watching the horrific consequences of European border policies all spring and summer, including all the drownings in the Mediterranean, the worsening situation in the “Jungle” camp in Calais, as well as the increasingly harsh rhetoric about migrants and refugees in British media and political life. We wanted to take action. In September, a small of group of us got together and formed Lesbians and Gays Support the Migrants.

We were inspired by Lesbians and Gays Support the Miners from the 1980s (made famous in the film Pride), who set up as a solidarity group during the 1980s miner’s strike. We have a very good relationship with them now; a couple of them have come to our meetings. A few of the founders of LGSMigrants (myself included!) know them quite well from organising their presence at London Pride last year.

We have two main goals. One is to provide practical solidarity. We do bucket-shaking sessions in the gay areas of London (such as Soho) and have recently put on a fundraising gig with queer performers. All of this money is being donated to one of the organisations working in the “Jungle” in Calais.

The other is to challenge the right-wing narrative about migration and refugees through creative actions. One of the key messages we wanted to challenge is that migration is a threat to LGBT rights in Europe, and that we as queer people should be scared of migrants. UK politicians have started using LGBT rights to justify the oppression of migrants and refugees by stereotyping them as all being homophobic and misogynist, and we wanted to publically resist that and provide an alternative narrative, that we as queer people can welcome, support and stand with migrants and refugees, and that we will join in their resistance.

Q: I´ve seen that you are also supporting strikers. What role does the working class play for you in the struggle against exploitation and oppression?

A: One of our main inspirations is the labour movement’s concept of solidarity. The simple act of standing together, unconditionally. We have an understanding that our struggles are all connected and that we cannot fight in isolation, but need to come together to resist and fight.

Q: What are the prospects for you in the common struggle with the refugees? What strategies will lead to success?

A: One of the reasons why we thought it was important to organise in solidarity with migrants specifically in the queer community is because our community also has experience of being deemed illegal by the state, demonised by the media, treated as a threat to the social order.

While there are still a lot of challenges for the queer community, we are in a stronger position now than we used to be. The demonisation has shifted; the main targets of state violence and repression right now are the refugees and migrants. As people who have been treated like this before, we have a responsibility to stand in solidarity with those being scapegoated now.

We always try to work with self-organised migrant groups and support them. They know what they need and what is needed in their own communities.

Q: What are your next actions and projects, especially when the situation of the refugees is getting worse?

A: We have been fundraising for an organisation that works in the “Jungle” camp in Calais. Obviously, with everything that is happening there right now, funds are needed more than ever. We put on a fundraising gig in February, with queer performers, and raised over £1300. We are hoping to put on another, bigger event soon so that we can contribute even more.

We are also continuing to work closely with Movement for Justice. This weekend we organised a queer block for their Surround Yarl’s Wood protest. Yarl’s Wood is an immigration detention centre for women, where there have been a lot of cases of abuse. It is run by the private security company Serco, who we also targeted with our “Glitter bombs” the week before. We are organsing LGBT+ blocs at some upcoming demos and we are planning to collaborate with other radical groups in London to organise something for London Pride! We want to protest against the corporatism of the Pride event and raise awareness of the horrific way asylum seekers are treated by the British government, particularly the LGBT asylum seekers, who are forced to “prove” their sexuality in ways that are invasive and dehumanising.

We are hoping to be able to organise a solidarity trip to Calais soon, as we really want to help in any way we can with the current crisis. We are currently discussing with groups we know there, trade unions, etc., how we can be of best use.