LGBTQ+ Starbucks Workers Fight for Unions — and against All Discrimination

A new precarious generation is pushing for unions and labor rights, putting up a collective fight against all the inequalities that capitalism sustains. LGBTQ+ people have been an integral part of this process. 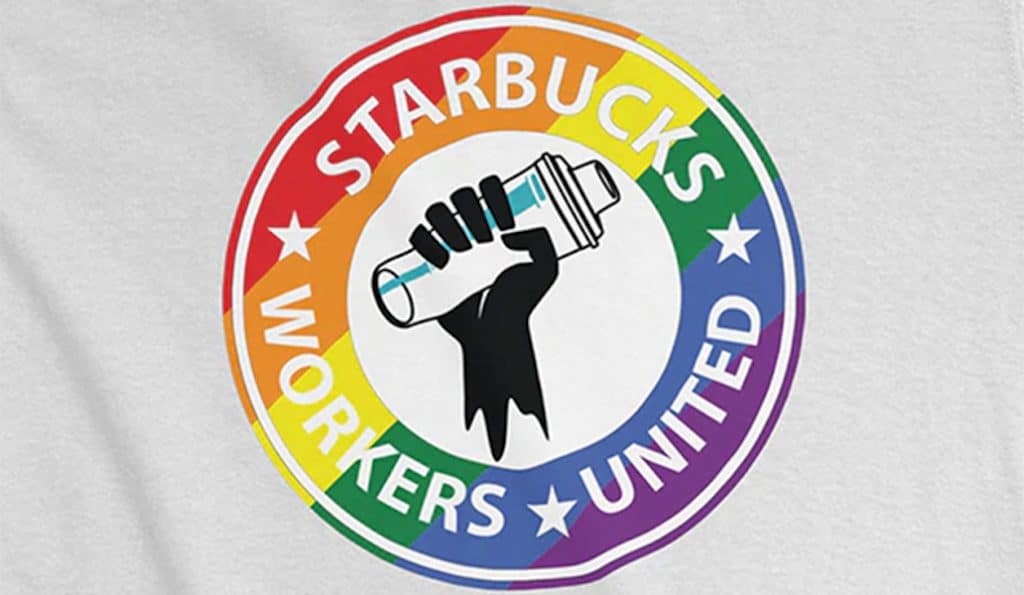 In 2020, Gabriel Ocasio Mejias was fired from his job as a Starbucks barista at Orlando International Airport, in Florida. The company claimed it was for drinking water behind the cash register, but in reality, they wanted to get rid of him because he and his coworkers had gone public with their unionization campaign in February of that year. Mejias, an LGBTQ+ activist who emigrated from Puerto Rico after Hurricane Maria, was thrilled to have gotten the job because he heard that Starbucks was pro-LGBTQ+.

Mejias filed an unfair labor practice claim with the National Labor Relations Board (NLRB). Over six months later, during which his coworkers were subject to aggressive union busting, Mejias was reinstated and paid back wages, which he described as a “huge victory.” But anti-union attacks weren’t the only hardship he faced: he was subject to homophobia from his manager, who asked him to stop acting feminine, wearing makeup, and using his rainbow-themed backpack. Working at Starbucks he says, “made me feel, in a way, that I was going back into the closet, which was very unnerving.”

In December a Starbucks in Buffalo, New York, became the first of the company’s 9,000 stores in the United States to vote to unionize. Since then, the campaign has gained momentum, with more stores in New York, Massachusetts, Arizona, and Florida successfully unionizing. Workers are managing to unionize some of capitalism’s most iconic companies, as happened just a few weeks at one of the Amazon warehouses on Staten Island.

Decades of neoliberal attacks have sought to delegitimize unions and limit their capacity to fight for working-class demands. As a result, the private-sector unionization rate in the U.S. is just 6.1 percent. “Generation U” — where “U” stands for “Union” — is a diverse group of precarious youth who are fighting to organize against exploitation. Their movement is deeply linked to Black Lives Matter and to feminist and LGBTQ+ movements.

Mars Moreno, a nonbinary Starbucks barista in Cleveland, is paid just $14 an hour. To afford a two-bedroom apartment in the area, a worker would need to work 40 hours a week at $16.63 an hour. Starbucks arbitrarily assigns workers their weekly hours, meaning they never know how much they’ll be paid. In addition to issuing threats of termination, the company has been cutting the hours of union organizers like Moreno and hiring more baristas. This is a form of union busting, effectively diluting the union vote. Plus, the lower hours prevent workers from being eligible for health insurance. In this way, Starbucks is doing everything it can to prevent its “partners,” as it calls its workers, from unionizing.

Leo Hernandez, from Tallahassee, Florida, comes from a working-class family and took it for granted that they would need to work multiple jobs to make ends meet. That’s why in addition to Starbucks, they work as a babysitter and deliver food for an app. Hernandez is exhausted from spending all their time worrying about money: “I don’t have time to hang out with people. Quite frankly, I work, I go home. And then I go work some more.”

This situation is intertwined with questions about racial discrimination, xenophobia, gender, and sexuality. Many of the people involved in the unionization process are part of the generation that mobilized against racism and inequality, and for them there is no dividing line between the fight against discrimination and the fight for fair working conditions. According to the company’s own statistics, almost half of U.S. Starbucks workers are people of color, and seven out of 10 are women. The company does not know how many of its employees are LGBTQ+, but as the Washington Post points out, queer people have been a major force behind the push to organize.

This diverse composition of workers is reflected in the voices of those across the country who are speaking out amid this unionization process. Angel Krempa, 23, was fired earlier this month for leading the organization effort at a store in Depew, near Buffalo. She points out, “Women and the LGBT community have had their voices suppressed so many times, we’re the ones who are really standing up for everybody — not just ourselves, but everybody.”

Starbucks dutifully dons a rainbow-colored logo during Pride month and tries to project a gay-friendly image. The company provides healthcare benefits for trans people, including coverage for surgeries and hormones, in a country where healthcare is very expensive and difficult to access even for those with insurance.

But Levaille Eitzman, a trans man who also works in Cleveland, complains that they have been trying to access these rights for two years, but have been unsuccessful because the company puts obstacles in their way. Eitzman needs to work at least 20 hours a week for three consecutive months to qualify for health insurance. The unionization process has complicated this even more. Even with the best tier of health insurance, they were told that they would have to spend more than $5,000 out of pocket for top surgery, over half of the $9,000 price tag.

Eitzman’s barriers to care are in sharp contrast with the reality of figures like Caitlyn Jenner, a millionaire and famous trans woman who recently ran for governor of California as a Republican. The lives of most LGBTQ+ youth are not the ones showed in advertisements, where it seems like the biggest problem is which rainbow-colored product or service to consume. These people do not conform to the stereotypes of gays and lesbians who have purchasing power and who serve neoliberalism’s need to exploit the niche market of sexual diversity.

Not all sectors have equal access to the rights that years of LGBTQ+ activism have demanded. In this way, Starbucks workers’ claims of discrimination highlight the two faces of a neoliberalism that, while paying lip service to tolerance — limited to the conquest of some basic rights — has deepened material inequality on an unprecedented scale. Starbucks workers point out this contradiction. “You can’t be pro-LGBTQ, pro-Black Lives Matter, pro all these things and be anti-union,” says Casey, another barista from Buffalo. “It doesn’t work that way.”

Leo Hernandez finds that organizing gives them a “sense of community,” which they then see reflected in other stores. “We’re being connected to each other in a way we haven’t seen before,” they say. They connect these experiences to those of Amazon workers who are in a similar process of unionization, and with other struggles, such as that of healthcare workers at Buffalo’s Mercy Hospital. Hernandez and others even went to the picket line in support of these healthcare workers’ strike.

That is why these companies feel threatened by workers’ organization efforts and are fighting hard against the unions. They see a generation of young workers who not only question their increasing precariousness — they’re also fighting all kinds of discrimination based on gender, sexuality, race, and nationality. These workers reject consumerist individualism and the notion that we should resign ourselves to gradually deteriorating working and living conditions. Instead, they bravely present a collective struggle that questions all the inequalities that sustain capitalism.

Originally published in Spanish on April 18 in La Izquierda Diario.