As the coronavirus pandemic spreads, millionaires and billionaires, who have been key to oppressing the working class, are trying to position themselves as everyday Americans. We need to understand them for what they are: beneficiaries and key supporters of the capitalist system that helped create this crisis. 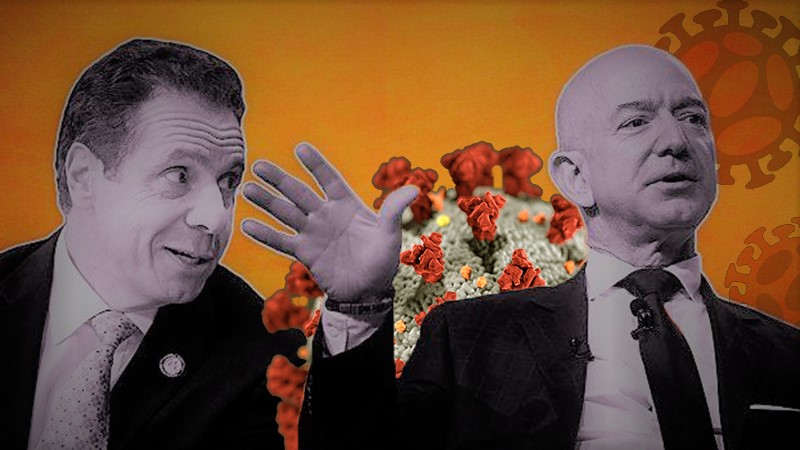 My name is Mike. I’m a physician in NYC working on the front lines of the coronavirus pandemic. I’m also a socialist and member of Left Voice.

It was recently reported that a 17 year old boy in Lancaster, California died suddenly, likely of coronavirus. The boy, who had no previous health conditions, was sick for only a few days. On Friday he was healthy and by Wednesday he was dead. On Wednesday, he went to urgent care as he was not feeling well, but since he had no health insurance, the urgent care center declined to treat him. He was directed to transfer to a nearby hospital, but en route, he went into cardiac arrest. He arrived at the nearby hospital, was revived, but died hours later.

In a Youtube address, the Mayor of Lancaster, Rex Parris gave his condolences. “We have lost” a 17 year old boy, he said. No, no, no, a 17 year old boy was killed on Wednesday night. A 17 year old boy was killed by a capitalist economic system and a for profit health care system that puts profit accumulation above all else. Explain to me how we can live in a country that allows one man to have a net worth over $100 billion, but still allows for someone to be “turned away” due to their health insurance status?

Let me be clear, the for profit health care system killed this boy–just as it has killed many others from either denying them care or from economically destroying patients and their families. In this system health and well being are secondary to profit accumulation, period.

It’s interesting that politicians like Parris continue to use this type of passive language to misidentify the real problems at hand. They never remotely touch upon how their maintenance of exploitative, oppressive systems may be to blame. Let’s take another politician as an example, shall we?

Each day I have not been working in the clinic or hospital, I have watched Cuomo’s daily address where I have seen him identify his family as if they are normal, everyday members of the working class. He speaks of how the coronavirus could affect his mom or his sister as if they live just as an everyday New Yorker does. He wants to position himself as the progressive antidote to Trump.

But this hunk of a millionaire is the same person responsible for shutting down several hospitals in the state, leading to an overall reduction in hospital beds. Peculiarly, NYC is now scrambling to make makeshift hospital sites for the influx of new patients that will need to be treated. This is the same man who just pushed a plan to cut Medicaid spending by some $400 million during a pandemic. The same man who uses prison labor to bottle hand sanitizer and refuses to release inmates from overcrowded jails, even as coronavirus spreads. At the same time this man pretends to care about the working class, he appoints private equity vultures like William Mulrow and Stephen Cohen as key individuals in “rebuilding New York’s economy.”  He isn’t one of us.

Buddy, Mr. Cuomo, I am talking directly to you, your family knows nothing about the hardship a working class family is enduring. You know nothing about the struggle working class New Yorkers face. You know nothing about the struggle of the patient I spoke with today who is currently living in one of the crowded shelters of NYC, pregnant, with coronavirus. One of the shelters that is so crowded because you and every other capitalist politician allow hundreds of thousands of apartments in New York City to stay vacant so your elite friends can turn a profit. .

We Are All in This Together?

Now that we see coronavirus exposing all of the contradictions of the capitalist system, billionaires want to pretend we are all equal in the fight against the virus. They are suggesting that we’re all in this together. Bezos recently suggested that the public donate to the company’s “Amazon Relief Fund” established to support workers under financial distress. Amazon’s child company, Whole Foods, suggested that workers share sick leave with other workers who need to take time off. Meanwhile these companies pay ZERO DOLLARS in taxes.

The world’s richest man, who runs a company that is worth over $1 trillion, could individually cover any expense of every one of his employees and not bat an eyelash. If anything we should take every dime this criminal has accumulated by exploiting his workers and give it back to the public.

We are all “in this fight together”–as the corporate elite likes to claim– yet hospitals are postponing buying ventilators because they are concerned about their bottom line, despite the coming catastrophe health care providers like myself know is on the horizon. We are all “in this fight together,” yet investment bankers are pushing medical supply companies and drug firms to consider ways they can increase profits from this crisis.

The only positive I see in the pandemic, is it is finally exposing capitalism for what it is: a parasitic system, run by a parasitic class that does not give a shit about the planet or the general public. Working people need to stick together during this crisis, but we also need to understand who our enemies are: the capitalists and the economic system that has led us into this mess in the first place.