Lifelong Centrist Merrick Garland Is Anything but “Apolitical”

Biden has picked Merrick Garland as his nomination for Attorney General. A lifelong centrist with bipartisan appeal and a conservative record on criminal justice, his nomination signals Biden’s resistance to leftist pressure and desire to return to business-as-usual. 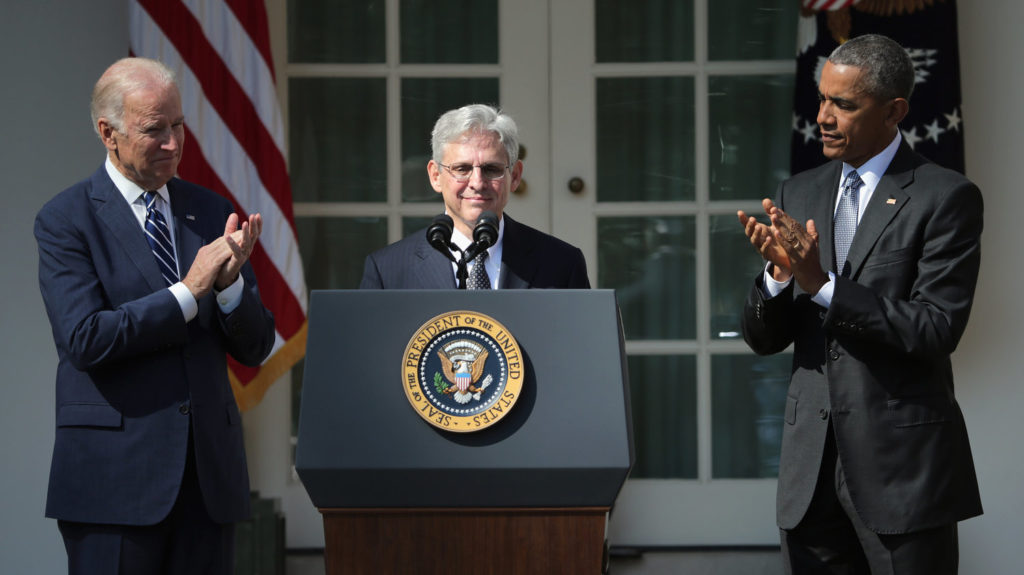 President Obama and Vice President Biden stand with Judge Merrick B. Garland as he is nominated to the U.S. Supreme Court in 2016. Photo: Chip Somodevilla

This week, President-elect Joe Biden announced his intention to nominate Judge Merrick Garland to be Attorney General in his incoming administration. A career-long centrist and moderate, he is palatable to both establishment Democrats and Republicans, and choosing him signals Biden’s desire to return to the Obama-era status quo. But a closer examination of Garland’s conservative record reveals yet again that Biden has no intention of shifting left, even after a year that saw some of the biggest uprisings in U.S. history.

Garland, the Chief Judge of the District of Columbia Court of Appeals, is best known for his blocked nomination to the U.S. Supreme Court in 2016. President Obama had nominated him to replace Justice Antonin Scalia, but Republicans in the Senate, led by Majority Leader Mitch McConnell, refused to hold a hearing on his appointment. They alleged that the seat should not be filled during an election year, setting the stage for right-wing judge Neil Gorsuch’s confirmation at the start of Trump’s tenure.

By nominating him to the Supreme Court, Obama hoped that Garland’s bipartisan appeal would win him much-needed confirmation votes in the Republican-held Senate. This is likely one reason why Biden, who prides himself on his ability to reach across the aisle to Republicans, has tapped him for Attorney General. Democrats and Republicans alike have praised him over the decades, with McConnell going so far as to recommend him for FBI Director in 2017. Yesterday, Trump ally Lindsay Graham tweeted his approval of Biden’s choice, calling Garland a “sound choice,” and a man of “great character [and] integrity.”

Garland’s record on labor, the environment, and regulation likely appeal to Democrats. In his decades on the D.C. Court of Appeals, he has often sided with the EPA and environmental groups on issues such as clean air and water and upheld Obama-era standards on toxins and pollutants. On labor, he has frequently ruled in favor of employees over businesses. Out of the 22 cases he heard from the National Labor Relations Board, he sided with employees citing discrimination all but four times.

Despite this record, we should not interpret Garland as a “pro-labor” choice. Siding with employees in a few cases of unfair labor practices is not akin to rebuilding the labor movement, which has been systematically decimated over the decades. And while Garland overall has tended to show deference to regulators on issues such as workplace and product safety, he joined a decision after the Citizens United ruling that ultimately gave rise to super PACs. This is a telling sign that for all the crumbs he may offer workers, he is ultimately a friend of capital and big business, and he will not hesitate to rule in their favor.

Garland’s record also provides a clear answer to why he has received similar plaudits from conservatives and why progressives criticized his nomination to the Supreme Court — and continue to criticize him now. According to NPR, Garland has a “pro-prosecution bent in criminal cases” and is even more conservative on criminal justice than Justice Scalia, whom he would have replaced. Legal scholars have described Garland as a “traditionalist” and found that he is unlikely to take a liberal position on criminal law. He tends to uphold criminal convictions, rule with the government against defendants, and has been unwilling to hold law enforcement accountable for their violence, often siding with them over their victims. When Obama tapped Garland for the Supreme Court in 2016, Vox predicted that his approval would lead to “little to no gain for criminal justice reformers — even if he is replacing the notoriously conservative Scalia.”

Perhaps most infamously, Garland often ruled in favor of detainee policies at Guantanamo Bay. Over several years, Garland systematically voted to uphold detentions, permitting the government to keep many imprisoned at the camp and at one point voting to prevent detainees from challenging their detentions in civil courts. As if voting to indefinitely and unjustly imprison detainees without trial was not enough, Garland also ruled that intrusive groin searches were a legal and necessary security measure.

Tellingly, mainstream media outlets have also speculated that Garland’s nomination reflects Biden’s desire to portray the Justice Department as “apolitical.” Following the Trump administration, which saw the president use his Attorney Generals — first Jeff Sessions, then William Barr — to further his political agenda, Biden may be seeking to restore the Department’s ostensible independence and tone down its politicization by choosing Garland, a lifelong centrist.

In this sense, Garland’s nomination is not unlike that of Janet Yellen, who claimed that there will be no signs of “political motivation” in her decisions as head of the Federal Reserve. Apparently, just as the political affiliations of the country’s highest ranking economists do not affect economic decision-making, politics can be extracted from the Attorney General’s legal decision-making. But Garland is anything but apolitical — he represents the politics of the ruling class, which is united in its defense of capitalism, austerity, racism, and imperialism. Democrats and Republicans agree on the need to put profits before people, imprison Black and Brown people, and impose U.S. hegemony abroad.

Garland’s record gives us a glimpse into what his “apolitical” agenda will look like in action. As head of the Department of Justice and the government’s chief lawyer, he will advise the Biden administration on legal matters and assume a vast array of responsibilities, including enforcing federal laws and overseeing agencies such as the FBI. During a time when the United States has been rocked by uprisings against police brutality, Garland’s deference to law enforcement — like that of Joe “Shoot ‘em in the leg” Biden — portends greater crackdowns on protesters and continued staunch support for racist police and federal agents. As for the working-class abroad, Garland’s atrocious rulings on Guantanamo Bay signal that he will rubber stamp the same imperialist oppression during a Biden administration.

Above all, Garland’s nomination shows that Biden did not have any intention — and now that Democrats have captured the Senate, no incentive — to make concessions to the left. After the enormous uprisings against police violence last year, Joe Biden nominated a moderate, centrist judge who votes conservatively on criminal justice issues, rules against defendants, and sides with law enforcement. Along with Biden’s other nominees — Janet Yellen, Lloyd Austin and his national security team, Neera Tanden, Tom Vilsack, and others — we see that again, with Biden at the head of the U.S. government, “nothing will fundamentally change.” We will instead return to bipartisan middle-of-the-road governance after Trump.